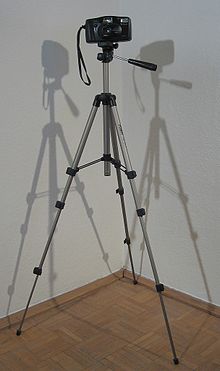 A camera mounted on a tripod.

In photography, a tripod is used to stabilize and elevate a camera, or to support flashes or other photographic equipment. All photographic tripods have three legs and a mounting head to couple with a camera. The mounting head usually includes a 1/4" diameter, 20 threads per inch (1/4-20) thumbscrew which couples to a female receptor located on the vast majority of cameras, as well as a mechanism to be able to rotate and tilt the camera when it is mounted on the tripod. Tripod legs are usually collapsible towards the height axis and telescoping, in order to save space when not in use. Tripods are usually made from aluminum, carbon fiber, steel, wood or plastic.

Tripods are used for both still and motion photography to prevent camera movement. They are necessary when slow-speed exposures are being made, or when telephoto lenses are used, as any camera movement while the shutter is open will produce a blurred image. In the same vein, they reduce camera shake, and thus are instrumental in achieving maximum sharpness. A tripod is also helpful in achieving precise framing of the image, or when more than one image is being made of the same scene, for example when bracketing the exposure. Use of a tripod may also allow for a more thoughtful approach to photography. For all of these reasons a tripod of some sort is often necessary for professional photography as well as certain video uses. Tripods are also used as an alternative to C-Stands to photographic accessories.

For maximum strength and stability, most photographic tripods are braced around a center post, with collapsible telescoping legs and a telescoping section at the top that can be raised or lowered. At the top of the tripod is the head, which includes the camera mount (usually a detachable plate with a thumbscrew to hold onto the camera), several joints to allow the camera to pan, rotate and tilt, and usually a handle to allow the operator to do so without jostling the camera. Some tripods also feature integrated remote controls to control a camcorder or camera, though these are usually proprietary to the company that built the camera.

The historic standard threading for the bolt that attaches the camera to the tripod is 1/4"-20tpi (threads per inch) British Standard Whitworth (Whitworth or BSW) for smaller cameras or 3/8"-16tpi BSW for larger cameras and pan/tilt heads. 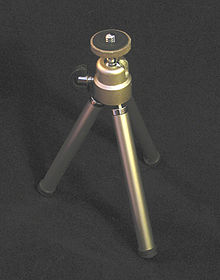 A tabletop tripod with a ball head.

There are several types of tripod. The least expensive, generally made of aluminium tubing and costing less than US$100, is used primarily for consumer still and video cameras; these generally come with an attached head and rubber feet. The head is very basic, and often not entirely suitable for smooth panning of a camcorder. A common feature, mostly designed for still cameras, allows the head to flip sideways 90 degrees to allow the camera to take pictures in portrait format rather than landscape. Often included is a small pin on front of the mounting screw that is used to stabilize camcorders. This is not found on the more expensive photographic tripods.

More expensive tripods are sturdier, stronger, and usually come with no integrated head. The separate heads allow a tripod-head combination to be customized to the photographer's needs. There are expensive carbon fiber tripods, used for applications where the tripod needs to be lightweight. Many tripods, even some relatively inexpensive ones, also include leveling indicators for the legs of the tripod and the head.

Many of the more expensive tripods have additional features, such as a reversible center post so that the camera may be mounted between the legs, allowing for shots from low positions, and legs that can open to several different angles. 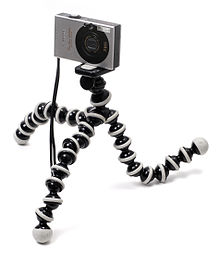 A tripod with flexible legs permitting it to grip to some objects.

Small tabletop tripods (sometimes called tablepods) are also available, ranging from relatively flimsy models costing less than US$20, to professional models that can cost up to $800 USD and can support up to 68 kg (150 lb). They are used in situations where a full sized tripod would be too bulky to carry. An alternative is a clamp-pod, which is a ball head attached to a C-clamp.

Another technique involves forming a string triangle held taut around the two feet of the photographer and linked to the camera. This negative string 'tripod' can stabilize the camera sufficiently to use a shutter speed three stops slower.[1]

The head is the part of the tripod that attaches to the camera and allows it to be aimed. It may be integrated into the tripod, or a separate part. There are generally two different types of heads available. 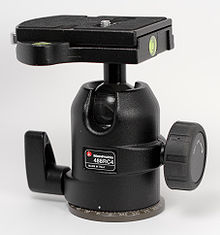 A ball head utilizes a ball and socket joint to allow movement of all axes of rotation from a single point. Some ball heads also have a separate panoramic rotation axis on the base of the head. The head has two main parts, the ball, which attaches to the camera and the socket, which attaches to the tripod. The camera is attached to the ball via quick release plate, or a simple UNC 1/4"-20 [2] screw. The socket is where the ball rotates in, and also contains the controls for locking the ball. The socket has a slot on the side, to allow the camera to be rotated to the portrait orientation. Ball heads come in varying styles of complexity. Some have only one control for both ball and pan lock. While others have individual controls for the ball, pan, and also ball friction. Ball heads are used when a free-flow movement of the camera is needed. They are also more stable, and can hold heavier loads, than pan-tilt heads. However, ball heads have the disadvantage that only one control is available to allow or prevent movement of all axes of rotation, so if the camera is tilted on one axis, there may be risk of tilting on the other axes as well. When movement of one, or two axes or rotation is needed, a pan-tilt head is used.

The pan-tilt head has separate axes and controls for tilting and panning, so that a certain axis can be controlled without risk of affecting the other axes. These heads come in two types, 2-way and 3-way. 2-way heads have 2 axes and controls, one for panoramic rotation, and one for front tilt. 3-way heads have 3 axes and controls, one for panoramic rotation, front tilt, and lateral tilt. The controls on these heads, are usually handles that can be turned, to loosen or tighten the certain axis. This allows movement in one, a few, or none of the axes. When movement of all axes of rotation is needed, a ball head is used. There are some pan-tilt heads that use gears, for precision control of each axis. This is helpful for some types of photography, such as macro photography.

Other head types include the gimbal head, fluid head, gear head, alt-azimuth, and equatorial heads. Fluid heads and gear heads move very smoothly, avoiding the jerkiness caused by the stick-slip effect found in other types of tripod head. Gimbal heads are single-axis heads used in order to allow a balanced movement for camera and lenses. This proves useful in wildlife photography as well as in any other case where very long and heavy telephoto lenses are adopted: a gimbal head rotates a lens around its center of gravity, thus allowing for easy and smooth manipulation while tracking moving subjects. 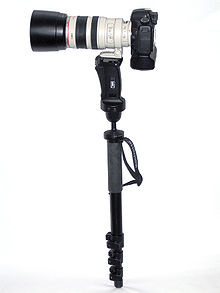