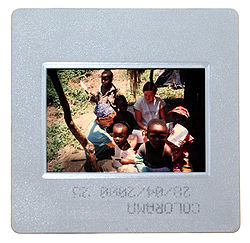 A single slide, showing a color transparency in a plastic frame 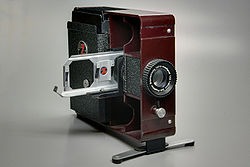 A slide projector, showing the lens and slide holder.

In photography, a reversal film is a type of photographic film that produces a positive image on a transparent base. Also known as dias or slide. The film is processed to produce transparencies or diapositives instead of negatives and prints. Reversal film is produced in various sizes, from 35mm roll film to 8×10" sheet film.

A slide is a specially mounted individual transparency intended for projection onto a screen using a slide projector. This allows the photograph to be viewed by a large audience at once. The most common form is the 35mm slide, with the image framed in a 2×2" cardboard or plastic mount. Some specialized labs produce slides from digital camera images in formats such as JPEG, and also work with computer-generated presentation graphics and make slides from images such as fingerprints, microscopic sections, paper documents, astronomical images, etc.

Reversal film is sometimes used as motion picture film, mostly in the 16mm, Super 8 and 8mm formats, to yield a positive image on the camera original. This avoids the expense and slight degradation of image quality resulting from using a negative film, and copying to a positive, to produce a print for projection.

The earliest practical and commercially successful color photography reversal process was the Lumière Autochrome, introduced in 1907. This was an additive method, using a panchromatic emulsion coated on a thin glass plate previously coated with a layer of dyed potato starch grains. Autochrome plates were discontinued in the 1930s[1] after the introduction of Lumière Filmcolor in sheet film and Lumicolor in roll film sizes. Also using the additive principle and reversal processing were the Agfa color screen plates and films and Dufaycolor film, all of which were discontinued by 1961.[2]

Leopold Godowsky, Jr. and Leopold Mannes, working with the Eastman Kodak Company, developed Kodachrome, the first commercially successful color film to use the subtractive method. Kodachrome was introduced in 1935 as 16mm motion picture film, and in 1936 as 35mm film for still cameras.[3] The Kodachrome films contained no color dye couplers; these were added during processing.

In late 1936, Agafacolor Neu was launched, Agfa having overcome earlier difficulties with color sensitivity problems. This film had the dye couplers incorporated into the emulsion, making processing simpler than for Kodachrome.[2]

Early color negative film had many shortcomings, including the high cost of the film, processing and printing, the mediocre color quality, rapid fading and discoloration of highlights [4] of some types of print that became noticeable after several years. Amateurs who owned projection equipment used reversal films extensively because the cost of projection equipment and slide film was offset by not having to pay for prints. Eventually, print quality improved and prices decreased, and, by the 1970s, color negative film and color prints had largely displaced slides as the primary method of amateur photography.

Until about 1995, color transparency was preferred for publication, and was widely used in commercial and advertising photography, reportage, sports, stock and nature photography. Digital media gradually replaced transparency film.

All color reversal film sold today is developed with the E-6 process. The non-substantive Kodachrome films, the last of which was discontinued in 2009, was processed with the K-14 process.[5]

Polaroid produced an instant slide film called Polachrome. It was packaged in cassettes like normal 35mm film. A separate processing unit was used to develop it after exposure.

Black-and-white transparencies can be made directly with some modern black-and-white film using reversal processing. The process is used when transparencies are desired rather than the negatives normally yielded by these films. First, the negative image is developed but the undeveloped silver halide salts are not removed by fixing. The negative image is removed by bleaching with a solution of potassium permanganate or potassium dichromate in dilute (typically, one percent) sulfuric acid, which is removed by washing and a clearing bath containing sodium metabisulfite or potassium metabisulfite. The remaining silver halide salts are re-exposed to light, developed and fixed (the fixing bath mainly serves to harden the gelatin, as no undeveloped silver salts should still remain), and the film is washed and dried.[6]

Black-and-white transparencies were once popular for presentation of lecture materials using 31⁄4" by 4" (31⁄4" square in the UK) glass-mounted slides. Such positive black-and-white projection is now rarely done, except in motion pictures. Even where black-and-white positives are currently used, the process to create them typically uses an internegative with standard processing instead of a chemical reversal process.

Black-and-white reversal processing needs have changed over the 100+ years it has been around. Today the debate is widespread. Some require a better more optimal image to scan. Some are going back to old-time processes and require a positive to eliminate an entire step. Some want the better tonal quality a transparency offers. Some just want to get out the slide projector.

Reversal films are the preferred film choice of professional photographers for images intended for reproduction in print media. This is because of the films' high contrast and high image resolution compared to negative (print) films.[10] 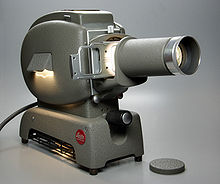 Finished transparencies are most frequently displayed by projection. Some projectors use a sliding mechanism to manually pull the transparency out of the side of the machine, where it is replaced by the next image. Modern, advanced projectors typically use a carousel that holds a large number of slides; a mechanism automatically pulls a single slide from the carousel and places it in front of the lamp.