Agfa-Gevaert N.V. (Agfa) (Euronext: AGFB, FWB: AGE) is a European multinational corporation that develops, manufactures, and distributes analogue and digital imaging products and systems, as well as IT solutions. The company has three divisions. Agfa Graphics offers integrated prepress and industrial inkjet systems to the printing and graphics industries. Agfa HealthCare supplies hospitals and other care organizations with imaging products and systems, as well as information systems. Agfa Specialty Products supplies products to various industrial markets. It is part of the Agfa Materials organization. In addition to the Agfa Specialty Products activities, Agfa Materials also supplies film and related products to Agfa Graphics and Agfa HealthCare.

In the past, Agfa film and cameras were prominent consumer products. However, in 2004, the consumer imaging division was sold to a company founded via management buyout. AgfaPhoto GmbH, as the new company was called, filed for bankruptcy after just one year.[1] The brands are now licensed to other companies by AgfaPhoto Holding GmbH, a holding firm. Following this sale, Agfa-Gevaert's commerce today is 100% business-to-business.

Headquartered in Mortsel, Belgium, Agfa has sales organizations in 40 countries. In countries where Agfa does not have its own sales organization, the market is served by a network of agents and representatives. At the end of 2010, the company had 11,766 employees (full time equivalent permanent) worldwide. Agfa has manufacturing plants around the world. The largest production and research centers are based in Belgium, the United States, Canada, Germany, France, Italy and China. Net sales for 2010 totaled 2,948 million euros.

Agfa is organized into three business groups as follows:

Agfa Specialty Products supplies products to a variety of industries.

In 2004, Agfa-Gevaert left the consumer market. It no longer sells photo film, cameras, and other photo equipment. 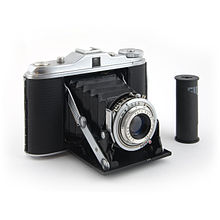 Agfa produced a range of cameras which included:

Roughly in temporal order, including:

While former AGFAPHOTO, has disappeared, the surviving Belgian Branch of AGFA continues to produce, among other things, b/w, colour negative and colour reversal materials for aerial photography. Some of these are cut to the usual 135 and 120 formats by MACO PHOTO and distributed under the brand name ROLLEI. Specifically, these re-branded AGFA materials include ROLLEI RETRO 80S, 200S and 400S, DIGIBASE CN200 and CR200.

Agfa photographic papers were of very high quality and included brands such as:

The production of material identical to the last generation of fibre-based and resin coated photographic AGFA MULTIGRADE papers has been resumed by ADOX.