Computed Radiography (CR) uses very similar equipment to conventional radiography except that in place of a film to create the image, an imaging plate (IP) made of photostimulable phosphor is used. The imaging plate housed in a special cassette and placed under the body part or object to be examined and the x-ray exposure is made. Hence, instead of taking an exposed film into a darkroom for developing in chemical tanks or an automatic film processor, the imaging plate is run through a special laser scanner, or CR reader, that reads and digitizes the image. The digital image can then be viewed and enhanced using software that has functions very similar to other conventional digital image-processing software, such as contrast, brightness, filtration and zoom. 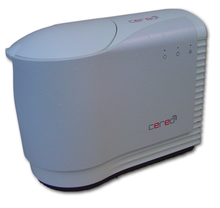 Computed radiography (CR) is often distinguished from Direct Radiography (DR). CR and DR have many similarities. Both CR and DR use a medium to capture x-ray energy and both produce a digital image that can be enhanced for soft copy diagnosis or further review. Both CR and DR can also present an image within seconds of exposure. CR generally involves the use of a cassette that houses the imaging plate, similar to traditional film-screen systems, to record the image whereas DR typically captures the image directly onto a flat panel detector without the use of a cassette. Image processing or enhancement can be applied on DR images as well as CR images due to the digital format of each. There are many different types of DR detectors in use in medicine and industry. Each type has its own merits and distinctions and may be applied to certain imaging requirements based on these attributes.

CR and DR should not be confused with fluoroscopy, where there is a continuous beam of radiation, and the images appear on the screen like on a TV. This is the system many people are familiar with, where the image of the article being x-rayed is viewed in real time on a monitor or display. Many people think airports use fluoroscopes for baggage inspection, when in fact LDAs (Linear Diode Arrays) are universally used to generate static images of luggage content. LDAs are also used in a wide variety of other screening and imaging applications, and are also presented in a digital format. Modern fluorosopes use a device called an image intensifier to enhance the analog output of the real time x-ray image, where it is picked up by either a video or CCD camera and digitally enhanced to reduce the noise inherent in the system.

The CR imaging plate (IP) contains photostimulable storage phosphors, which store the radiation level received at each point in local electron energies. When the plate is put through the scanner, the scanning laser beam causes the electrons to relax to lower energy levels (photostimulated luminescence), emitting light that is detected by a photo-multiplier tube, which is then converted to an electronic signal. The electronic signal is then converted to discrete (digital) values and placed into the image processor pixel map.

Imaging plates can theoretically be re-used thousands of times if they are handled carefully. IP handling under industrial conditions, however, may result in damage after a few hundred uses. An image can be erased by simply exposing the plate to a room-level fluorescent light. Most laser scanners automatically erase the image plate after laser scanning is complete. The imaging plate can then be re-used. Reusable phosphor plates are environmentally safe but need to be disposed of according to local regulations.

Common applications for computed radiography include: 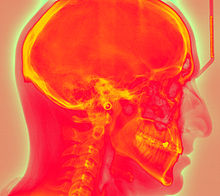 Computed Radiography systems are the most common in medical applications because they have proven reliability over more than two decades, flexibility to address a variety of clinical applications and lower costs to take multiple exam rooms digital. DR in the form of a portable detector starts at around $150,000.00, while a basic low volume CR can start as low as $30,000.00 (but higher volume, hospital-grade applications can be higher.) DR systems are generally sold as a full x-ray room replacements and tied to a single x-ray generator. CR IPs can be retrofitted to existing exam rooms and used in multiple x-ray sites since IPs are processed through a CR reader (scanner) that can be shared between multiple exam rooms.