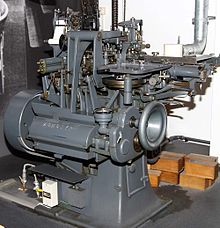 The Lanston Monotype Machine Company was founded by Tolbert Lanston in Washington D.C. in 1887. Lanston had a patented mechanical method of punching out metal types from cold strips of metal which were set (hence typesetting) into a matrix for the printing press. In 1896 Lanston patented the first hot metal typesetting machine and Monotype issued Modern Condensed, its first typeface. The licenses for the Lanston type library have been acquired by P22, a digital type foundry based in Buffalo, New York.

In a search for funding, the company set up a branch in London in 1897 under the name Lanston Monotype Corporation Ltd. In 1899 a new factory was built in Salfords near Redhill in Surrey where it has been located for over a century. The company was of sufficient size to justify the construction of its own railway station.

The original Monotype machine used "hot metal" to form individual letters. Thus spelling mistakes could be corrected by adding or removing individual letters. This was particularly useful for "quality" printing - such as books. In contrast the Linotype machine formed a complete line of type in one bar. Editing these required replacing an entire line (and if the replacement ran on to another line, the rest of the paragraph). But Linotype slugs were easier to handle if moving a complete section of text around a page. This was more useful for "quick" printing - such as newspapers.

The typesetting machines were continually improved in the early years of the twentieth century, with a typewriter style keyboard for entering the type being introduced in 1906. This arrangement addressed the need to vary the space between words so that all lines were the same length.

The keyboard operator types the copy, each key punching holes in a roll of paper tape that will control the separate caster. A drum on the keyboard indicates to the operator the space required for each line. This information is also punched in the paper. Before fitting the tape to the caster it is turned over so that the first holes read on each line set the width of the variable space. The subsequent holes determine the position of a frame, or die case, that holds the set of matrices for the face being used. Each matrix is a rectangle of copper recessed with the shape of the letter. Once the matrix is positioned over the mould that forms the rest of the piece of type being cast, molten type metal is injected.

Many of the typefaces familiar today were introduced during the first half of the twentieth century, such as Times New Roman and Perpetua. The program of revivals of old typefaces and the commissioning of new ones was a major part of the typographic renaissance of the period. For much of that century the company ran a compositor (typesetter operator) training school in London.

In 1936 the company was floated on the London Stock Exchange and became the Monotype Corporation Ltd. Later[when?] the company was split into three divisions: Monotype International, which manufactured spinning mirror switched laser beam phototypesetters; Monotype Limited, which continued the hot metal machines; and Monotype Typography, which designed and sold typefaces. A research and development department was set up in Cambridge to isolate it from day to day production issues. The produced the first Laser typesetter the Monotype Lasercomp.

In 1992 The Monotype Corporation Ltd. appointed Administrative Receivers on 5 March and four days later Monotype Typography Ltd. was established. Cromas Holdings, an investment company based in Switzerland, bought the Monotype Corporation Ltd. and Monotype Inc. (excluding Monotype Typography) and five other direct subsidiary companies in France, Germany, Italy, the Netherlands, and Singapore. Monotype Systems Ltd. was the adopted name for the new organization with Peter Purdy as Chairman, the name Monotype was under license from Monotype Typography Ltd which retained the trademark Monotype. Monotype Systems Ltd. focused on selling Pre-press software and hardware, Raster_image_processor RIPs and workflow.

In June 2002, Monotype Systems Limited was re-branded, IPA Systems Limited, as this marked the end of the existing trademark licence with Monotype Corporation. In the US Monotype Inc became alfaQuest Technologies Limited. Both companies still sell Pre-press software and hardware.

In 1999, Agfa-Compugraphic acquired the Monotype Corporation, which was renamed Agfa Monotype. In late 2004, after six years under the Agfa Corporation, the Monotype assets were acquired by TA Associates, a private equity investment firm based in Boston. The company was incorporated as Monotype Imaging, with a focus on the company's traditional core competencies of typography and professional printing.

Monotype was the first company to produce a digital version of the handwritten Persian script, Persian Nasta'liq. A Chinese "keyboard" was developed to typeset Chinese characters; it consisted of a book with a stylus. As the pages were turned, the page number was detected electrically and this was combined with the position of the character selected by the stylus on a large grid.

In early 2000, Monotype launched Fontwise, the first software to audit desktops for licensed and unlicensed (not necessarily illegal) fonts.

On 11 December 2009, Monotype Imaging Inc. announced that it acquired Planetweb, Inc., a developer specialized in applications and development tools for embedded devices.