In mechanics, degrees of freedom (DOF) are the set of independent displacements and/or rotations that specify completely the displaced or deformed position and orientation of the body or system. This is a fundamental concept relating to systems of moving bodies in mechanical engineering, aeronautical engineering, robotics, structural engineering, etc.

A rigid body that moves in three dimensional space has three translational displacement components as DOFs, while a rigid body would have at most six DOFs including three rotations. Translation is the ability to move without rotating, while rotation is angular motion about some axis.

If you were to think of an automobile as a rigid body traveling on a plane (a flat, two-dimensional space), it has three independent degrees of freedom: translation along or across the plane, and rotation to point in any direction or heading. Skidding or drifting is a good example of an automobile's 3 independent DOFs. By contrast, a train moves along a track so that the heading of the train is determined by its position on the track. Thus, the train is restricted to only one degree of freedom: position along the track.

The Exact constraint mechanical design method manages the degrees of freedom to neither underconstrain nor overconstrain a device. [1] 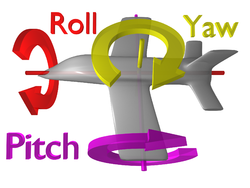 In general, a rigid body in d dimensions has d(d + 1)/2 degrees of freedom (d translations and d(d −1)/2 rotations). One line of reasoning for the number of rotations goes that rotational freedom is the same as fixing a coordinate frame. Now, the first axis of the new frame is unrestricted, except that it has to have the same scale as the original—so it has (d-1) DOFs. The second axis has to be orthogonal to the first, so it has (d-2) DOFs. Proceeding in this way, we get d(d-1)/2 rotational DOFs in d dimensions. In 1-, 2- and 3- dimensions then, we have one, three, and six degrees of freedom.

A non-rigid or deformable body may be thought of as a collection of many minute particles (infinite number of DOFs); this is often approximated by a finite DOF system. When motion involving large displacements is the main objective of study (e.g. for analyzing the motion of satellites), a deformable body may be approximated as a rigid body (or even a particle) in order to simplify the analysis.

In three dimensions, the six DOFs of a rigid body are sometimes described using these nautical names: 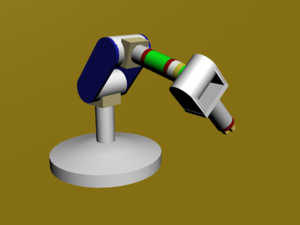 An articulated robot with 7 DOF in a kinematic chain (including surge at the end of the arm).

A system with several bodies would have a combined DOF that is the sum of the DOFs of the bodies, less the internal constraints they may have on relative motion. A mechanism or linkage containing a number of connected rigid bodies may have more than the degrees of freedom for a single rigid body. Here the term degrees of freedom is used to describe the number of parameters needed to specify the spatial pose of a linkage.

A specific type of linkage is the open kinematic chain, where a set of rigid links are connected at joints; a joint may provide one DOF (hinge/sliding), or two (cylindrical). Such chains occur commonly in robotics, biomechanics, and for satellites and other space structures. A human arm is considered to have seven DOFs. A shoulder gives pitch, yaw, and roll, an elbow allows for pitch and roll, and a wrist allows for pitch and yaw. Only 3 of those movements would be necessary to move the hand to any point in space, but people would lack the ability to grasp things from different angles or directions. A robot (or object) that has mechanisms to control all 6 physical DOF is said to be holonomic. An object with fewer controllable DOFs than total DOFs is said to be non-holonomic, and an object with more controllable DOFs than total DOFs (such as the human arm) is said to be redundant.

In mobile robotics, a car-like robot can reach any position and orientation in 2-D space, so it needs 3 DOFs to describe its pose, but at any point, you can move it only by a forward motion and a steering angle. So it has two control DOFs and three representational DOFs; i.e. it is non-holonomic. A fixed-wing aircraft, with 3–4 control DOFs (forward motion, roll, pitch, and to a limited extent, yaw) in a 3-D space, is also non-holonomic, as it cannot move directly up/down or left/right.

A summary of formulas and methods for computing the degrees-of-freedom in mechanical systems has been given by Pennestri, Cavacece, and Vita.[2]

In electrical engineering degrees of freedom is often used to describe the number of directions in which a phased array antenna can form either beams or nulls. It is equal to one less than the number of elements contained in the array, as one element is used as a reference against which either constructive or destructive interference may be applied using each of the remaining antenna elements. Applications exist for the concept in both radar practice and communication link practice, with beam steering being more prevalent for radar applications and null steering being more prevalent for interference suppression in communication links.