Page orientation is the way in which a rectangular page is oriented for normal viewing. The two most common types of orientation are portrait and landscape. The specific word definition comes from the fact that a close-up portrait of a person's face and upper body is more fitting for a canvas or photo where the height of the display area is greater than the width, and is more common for the pages of books. Landscape originally described artistic outdoor scenes where a wide view area is needed, but the upper part of the painting would be mostly sky and so is omitted.

Portrait screen orientation can also be selected for computers, but was uncommon until the introduction of Apple's iPad, and the most popular use is in mobile devices. However, portrait is preferred for editing page-layout work, in order to view the entire page on the screen at once without wasted space along the sides, and for script-writing, legal work (in drafting contracts etc.), and other applications where it is useful to see a maximum number of lines of text. It is also common in public information displays. 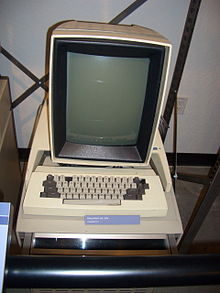 Portrait mode was first used on the Xerox Alto computer, which was considered technologically well ahead of its time when the system was first developed. Xerox product marketers did not understand how revolutionary the system was, and the portrait display faded away while common landscape-display televisions were appropriated for use as an inexpensive early microcomputer display.

The IBM DisplayWriter had a portrait monitor and keyboard with large backspace key, as it was designed for use in word processing not spreadsheets. Lanier, Wang, and CPT also made competing dedicated word processing computers with portrait modes. The height of the market for these computes was the late 1970s and early 1980s, prior to the introduction of the IBM PC. CPT's version ran a modified version of the DOS operating system. However, according to a long-time regional manager of the IBM personal computer division, speaking in confidence to the author of this entry in the mid 1980s, when the IBM PC was introduced, no portrait mode was made available for two reasons: (1) Top management didn't want the PC division to undermine the DisplayWriter product, (2) The computer was designed with spreadhsheets and software development in mind, not word processing. Thus, it had a keyboard without a large backspace key at first, substituting a key widely used in computer software writing. Within a short period of time, the DisplayWriter and other dedicated word processors were no longer available. However, Portrait Display Labs leaped into this market niche, producing a number of rotating CRT monitors as well as software which could be used as a driver for many video cards. Arguably, the phenomena of institutional sexism may be responsible for the path dependent nature of landscape monitors, which once introduced became the new standard. The emerging personal computer world was designed with largely male programmers and spreadsheet users in mind rather than largely female word processing operators. The later advent of the World Wide Web, whose pages are largely in portrait mode, failed to result in a widespread return to portrait displays. As of November 2011, for instance, HP no longer sells monitors in portrait mode, although they have a display stand which permits the user to attach two monitors and rotate either from landscape to display.

For the first computing devices a screen was built to operate in only portrait or landscape mode, and changing between orientations was not possible. Typically a custom video controller board was needed to support the unusual screen orientation, and software often needed to be custom-written in order to support the tall, narrow screen layout.

As video display technology advanced, eventually the video display board was able to accommodate rotation of the display and a variety of differing resolutions and scan rates. After several years of producing the first Macintosh portrait display, Radius introduced the Radius Pivot CRT monitor, that could be freely rotated between landscape and portrait with automatic orientation changes done by the video controller.

Rotation is now a common feature of modern video cards, and is widely used in tablet PCs, and by writers, layout artists, etc. Operating systems and drivers do not always support it; for example, Windows XP Service Pack 3 conflicts with monitor rotation on many graphics cards using ATI's Catalyst control software, Nvidia's proprietary drivers for Linux do not support screen rotation unless manual changes are made to its configuration.

Portrait mode is popular with arcade games that involve a vertically oriented playing area, such as Pac Man and Donkey Kong. The vertical orientation allows greater detail along the vertical axis while conserving detail on the sides.

The conversion of early popular arcade games to home consoles was difficult not only because the home computing capability was lower, but also the screen orientation was wrong and the home user could not be expected to set their television on its side to show the game correctly. This is why most early home versions of arcade games have a wide, squashed appearance compared to the full-quality arcade versions.

Modern arcade emulators are able to handle this difference in screen orientation by dynamically changing the screen resolution to allow the portrait oriented game to resize and fit a landscape display, showing wide empty black bars on the sides of the portrait-on-landscape screen.

Portrait orientation is still used occasionally within some arcade and home titles (either giving the option of using black bars or rotating the display), primarily in the vertical shoot 'em up genre due to considerations of aesthetics, tradition and gameplay.

Many modern video cards offer digital screen rotation capabilities. But in order for it to be used correctly, a special rotating display is required that is designed to be pivoted.

Very few CRT monitors made today are designed to permit rotation into portrait mode. It is not wise to turn a standard CRT monitor or television on its side due to a number of technical issues: 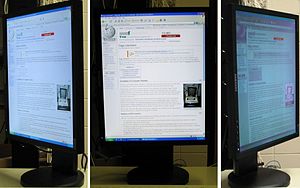 Rotation of LCD monitors is easier and less complicated to do since the mass of the panel is low, the heat generated is low, and there are no magnetic effects to be concerned about. Many higher quality panels feature built in pivot points to allow the user to easily rotate the screen into portrait mode.

However, due to the light polarization technology an LCD monitor, particularly TN panels, the angle of image viewability will degrade when rotated. Liquid crystal displays vary in contrast when viewed from different angles along one axis. This axis is normally oriented to be vertical so that the image quality appears unchanged when the screen is viewed from the side, and image contrast is adjusted by tilting the panel up or down. By rotating the screen 90 degrees, the varying contrast axis is now horizontal and a viewer to one side will see a washed out light contrast image, while a viewer on the other side sees a very dark contrast image.

Extensive experience with portrait displays results in the conclusion that a 20" portrait monitor is the ideal height for word processing and for reading PDF files. Larger monitors require too much up and down neck and eye movement.

Projectors can generally operate from any angle due to the compact, rigid design and a cooling system utilizing a forced-air fan. However for large heavy projectors the problem is how to mount the projector sideways, since nearly all ceiling mounts assume the projector hangs down from the mount in an upside-down landscape position. Extra-heavy bracing or weighted counter-balancing may be required to support a projector in a sideways portrait orientation. Projectors using an Hg-lamp (most of them, nowadays) should not be turned sideways as this shortens the lifespan of the bulb extremely.