Deep focus is a photographic and cinematographic technique using a large depth of field. Depth of field is the front-to-back range of focus in an image — that is, how much of it appears sharp and clear. Consequently, in deep focus the foreground, middle-ground and background are all in focus. This can be achieved through use of the hyperfocal distance of the camera lens.

Deep focus is achieved with large amounts of light and small aperture. It is also possible to achieve the illusion of deep focus with optical tricks (split focus diopter) or composite two pictures together. It is the aperture of a camera lens that determines the depth of field. Wide angle lenses also make a larger portion of the image appear sharp. The aperture of a camera determines how much light enters through the lens, so achieving deep focus requires a bright mise en scène. Aperture is measured in F-stops (T-stops on lenses for motion picture cameras are f/stops adjusted for the lens' light transmission. Do not use T-stops for depth of focus determination.) with a higher value indicating a smaller aperture.

Diagram of decreasing apertures, that is, increasing f-numbers, in one-stop increments; each aperture has half the light gathering area of the previous one. The actual size of the aperture will depend on the focal length of the lens.

The opposite of deep focus is shallow focus, in which only one plane of the image is in focus.

In the cinema Orson Welles and his cinematographer Gregg Toland were most responsible for popularizing deep focus.[1] Their film Citizen Kane (1941) is a veritable textbook of possible uses of the technique.

When deep focus is used, filmmakers often combine it with deep space (also called deep staging). Deep space is a part of mise-en-scene, placing significant actors and props in different planes of the picture. Directors and cinematographers often use deep space without using deep focus, being either an artistic choice or because they don't have resources to create a deep focus look, or both.

Directors may use deep focus in only some scenes or even just some shots. Other auteurs choose to use it consistently throughout the movie, either as a stylistic choice or because they believe it represents reality better. Directors like Orson Welles, Jean Renoir and Kenji Mizoguchi all use deep focus as part of their signature style.

The choice of shooting format affects how easy it would be to achieve a deep focus look. This is because the size of the sensor or film gate dictates what particular lens focal length would be used in order to achieve a desired viewing angle. Smaller sensors or film gauges will require an overall range of shorter focal lengths to achieve any desired viewing angle than larger sensors or film gauges. Because depth of field is a characteristic of lens focal length (in addition to aperture and focus distance setting), it is easier to achieve a deep-focus look with a smaller imaging sensor or film gauge. For example: a 40mm lens will give a 30-degree horizontal angle of view in the Super35 format. To achieve the same viewing angle with a 1/2" 16:9 sensor, you would need a 13mm lens. A 13mm lens inherently has much more depth-of-field than a 40mm lens. To achieve the same depth of field with a 40mm lens would require a very small aperture, which in turn would require far more light, and therefore time and expense.

Some filmmakers make deliberate use of the deep focus aesthetics of smaller-than-35mm digital formats. Miami Vice (Michael Mann, 2006) is among the many big budget movies that have been shot digitally in recent years. Cinematographer Dion Beebe believed that HD's depth of field is something to exploit:

We also decided that there were attributes of HD technology we liked and wanted to exploit, like the increased depth of field. Because of the cameras' chip size (2/3"), they have excessive depth of field that we decided not to fight, but rather utilize.[2]

A split diopter is half convex glass that attaches in front of the camera's main lens to make half the lens nearsighted. The lens can focus on a plane in the background and the diopter on a foreground. A split diopter does not create real deep focus, only the illusion of this. What distinguishes it from traditional deep focus is that there is not continuous depth of field from foreground to background; the space between the two sharp objects are out of focus. Because split focus diopters only cover half the lens, shots in which they are used are characterized by a blurred line between the two planes in focus.

Manipulated deep focus is not a new phenomenon, as it had also been created in other ways during the golden age of 20th century. The Diopter gave the opportunity for spectacular deep focus-compositions that would have been impossible to achieve otherwise. In the American New Wave, director Brian De Palma explored the possibilities of the split-focus diopter extensively, as did other 70s films such as Robert Wise's The Andromeda Strain and Star Trek: The Motion Picture.

Use in modern films 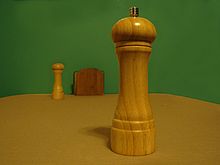 Example of shallow focus, the opposite of deep focus. The object in the foreground is sharp, but the objects in the background are a blur.

Starting in the 80s, American cinema has developed a trend that film scholar David Bordwell calls intensified continuity.[3] Bordwell claims that 1) The average length of each shot in a film has become shorter over the years. 2) Scenes are built up by closer framing. 3) More extreme focal lengths are used. 4) The scenes include an increased number of camera moves.

This trend has led to deep focus becoming less common in Hollywood movies. As mentioned in Bordwells' second point, master shots where two or more characters hold a conversation have gone out of fashion, lessening the need for deep focus. In a contemporary Hollywood movie a dialogue scene may consist only of tight close-ups, with the master shot abandoned. If more than one plane in the image contains narrative information, filmmakers switch focus ("rack focusing") instead of keeping both focal planes sharp. In addition, modern sets tend to have less lighting for more comfortable working conditions, and use of deep focus tend to require more light.

The development of intensified continuity may be due to directors' desire to capture the action or dialogue from many different angles and views, so-called coverage. The U.S. film critic Dave Kehr explains it this way:

If there is a single word that sums up the difference between filmmaking at the middle of the 20th century and the filmmaking of today, it is "coverage". Derived from television, it refers to the increasingly common practice of using multiple cameras for a scene (just as television would cover a football game).[4]

To stage a whole scene in one shot is no longer common. Director Steven Soderbergh claims:

That kind of staging is a lost art, which is too bad. The reason they no longer work that way is because it means making choices, real choices, and sticking to them. (...) That's not what people do now. They want all the options they can get in the editing room.[4]