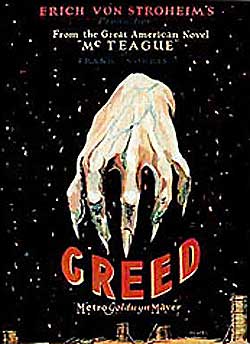 "Greed" is a 1924 dramatic . One of the most famous in cinema history it is also considered one of the greatest films ever. It was directed by and starring , Zasu Pitts, , Dale Fuller, Tempe Pigott, , , and Jack Curtis.

The plot follows an honest dentist whose wife wins a ticket, only to become obsessed with money. When her former lover betrays the dentist as a fraud, all of their lives are destroyed.

The movie was adapted by von Stroheim (shooting screenplay) and (titles) from the 1899 novel "" by . (The onscreen credit for was strictly a contractual obligation to her on the part of (the parent studio), as she was not actually involved in the production.)

The story of the making of the movie has become a legend. Under the aegis of the Goldwyn studio, von Stroheim attempted to film a version of the book complete in every detail. To capture the authentic spirit of the story, he insisted on filming on location in , the Sierra Nevada mountains, and , despite harsh conditions.

The result was a final print of the film that was an astonishing "ten hours" in length, produced at a cost of over $500,000 — an unheard of sum at that time (though Stroheim's 1921 film "Foolish Wives" was publicized by MGM as costing over a million) [http://www.imdb.com/title/tt0015881/trivia] . After screening the full-length film once to meet contractual obligations [Patrick Robertson: "Film Facts", 2001, Billboard Books, ISBN 0-8230-7943-0] , Metro-Goldwyn-Mayer, the studio that acquired Goldwyn during production, forced von Stroheim to edit the film to a more manageable length, and, with the assistance of fellow director Rex Ingram and editor Grant Whytock, he reluctantly trimmed the film to about four hours. The film was then removed from von Stroheim's control and cut further, despite his protests. Even key characters were removed from the final version so that it could be screened in a reasonable time frame. Existing prints of "Greed" run at about two hours and twenty minutes. The hours of cut film were destroyed by a janitor cleaning a vault who thought they were not important film rolls and threw them in an incinerator (although it appears that much of it survived until at least the late 1950s), and this film is known as one of the most famous "s" in cinema history. The released version of the film was a box-office failure, and was fiercely panned by critics. In later years, even in its shortened form, it was recognized as one of the great realistic films of its time. Rare behind-the-scenes footage of "Greed" can be seen in the Goldwyn Pictures film "".

In 1999, (the film's current rights holder) decided to "recreate", as closely as possible, the original version by combining the existing footage with still photographs of the lost scenes, in accordance with an original continuity outline written by director Erich von Stroheim. This restoration runs almost four hours. The re-edit was produced by . (Other classic films with missing footage include 's "The Magnificent Ambersons", 's "Lost Horizon", 's "A Star Is Born" and von Stroheim's "".)

In 1991, this film was selected for preservation in the United States as being deemed "culturally, historically, or aesthetically significant".