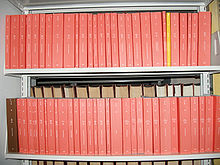 The Code of Federal Regulations (CFR) is the codification of the general and permanent rules and regulations (sometimes called administrative law) published in the Federal Register by the executive departments and agencies of the Federal Government of the United States.

The CFR is published by the Office of the Federal Register, an agency of the National Archives and Records Administration (NARA).

The CFR is divided into 50 titles that represent broad areas subject to Federal regulation.

Every regulation in the CFR must have an "enabling statute," or statutory authority. The United States Code (U.S. Code) precedes the CFR and contains statutes enacted by Congress. The CFR contains regulations, which spell out in further detail how the executive branch will interpret the law.[1] The two documents represent different stages in the legislative process. The U.S. Code is a codification of legislation, while the CFR serves as administrative law. Administrative law exists because the Congress often grants broad authority to executive branch agencies to interpret the statutes in the U.S.Code (and in uncodified statutes) which the agencies are entrusted with enforcing. Congress may be too busy, congested, or gridlocked to micromanage the jurisdiction of those agencies by writing statutes that cover every possible detail, or Congress may determine that the technical specialists at the agency are best equipped to develop detailed applications of statutes to particular fact patterns as they arise.

Under the Administrative Procedure Act, the agencies are permitted to promulgate detailed rules and regulations through a public "rulemaking" process where the public is allowed to comment, known as public information. After a period of time, the rules and regulations are usually published in the Federal Register.

The Parallel Table Of Authorities And Rules in the index to the CFR correlates laws with their regulations using U.S. Code citations, Statutes at Large citations and Public Law numbers.

The rules are treated by the courts as being as legally binding as statutory law, provided the regulations are a reasonable interpretation of the underlying statutes. This "reasonable interpretation" test or Chevron doctrine was articulated by the U.S. Supreme Court in a unanimous decision (6 voting, 3 recused) involving a challenge to new Clean Air Act regulations promulgated by the Reagan administration in 1981. See Chevron U.S.A., Inc. v. Natural Resources Defense Council, Inc.[2]

For example, if Congress enacted a law that simply stated that there are not to be "excessive" levels of mercury in any significant body of water in the United States (but defined things no further), an entity designated, as part of the law, to enforce it (probably the United States Environmental Protection Agency (EPA)) could define in a scientific way what an excessive level of mercury is, as well as what constitutes a significant body of water. The Agency's definitions and its plan of enforcement for what Congress intended (along with listed penalties for violation coming from Congress unless Congress specified otherwise) will all go into the CFR.

Also, enabling legislation can be passed by Congress which gives a federal non-Congressional entity wide latitude in creating rules (law of bases). For example, the EPA could be designated by Congress to promulgate rules "that control harmful pollutants"; the Agency could then promulgate broad rules (including definitions and enforcement provisions), in the absence of existing specific laws, to control lead emissions, radon emissions, pesticide emissions, and so forth. Such rules, including any definitions and enforcement provisions created by Congress or the Agency, will all go into the CFR.

It is important to understand that the CFR itself is written by lawyers for interpretation by lawyers and judges, and like statutes, must be carefully drafted in highly technical language to have effective broad application, yet limit the availability of loopholes. Unfortunately, the vast majority of employees of the federal government are not lawyers, and it would ask too much to force them to directly read, interpret, and apply the convoluted content of the CFR on a daily basis. Therefore, nearly all federal agencies have in-house counsel draft one or more internal manuals in plain English which set out daily internal operating procedures in very simple language that any layperson can follow. While such manuals do not really have the force of law, they are often the law as far as most employees and customers of such agencies are concerned, unless and until a dissatisfied customer of an agency appeals to a supervisor who does understand the CFR and the U.S.C. (or eventually sues the agency in court).

Oddly, despite the informality of such manuals, the U.S. Supreme Court has occasionally cited them as authority when confronted with situations not precisely addressed by the United States Code or the CFR.[3]

The rules and regulations are first promulgated or published in the Federal Register. Each is given a CFR citation, such as 42 CFR 260.11(a)(1), that can be cited immediately, without waiting for a page number from the physical copy. The aforementioned citation would be read, "title 42, part 260, section 11, paragraph (a)(1)."

NARA also keeps an online version of the CFR, the e-CFR, that is normally updated two days after changes to the regulations, that have been published in the Federal Register, become effective.

While new regulations are continually becoming effective, the printed volumes of the CFR are issued once each calendar year, on this schedule: 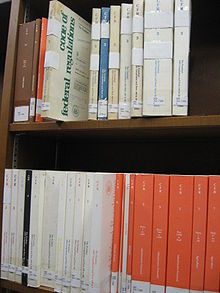 Code of Federal Regulations, seen at the Mid-Manhattan Library. Editions of Title 3, on the President, are kept on archive. Notice that for the first year of each new presidency, the volume is thicker.