A comparison of mobile phone standards can be done in many ways.

All radio access technologies have to solve the same problems: to divide the finite RF spectrum among multiple users as efficiently as possible. GSM uses TDMA and FDMA for user and cell separation. UMTS, IS-95 and CDMA-2000 use CDMA. WIMAX and LTE use OFDM.

For a classic example for understanding the fundamental difference of TDMA and CDMA imagine a cocktail party, where couples are talking to each other in a single room. The room represents the available bandwidth:

TDMA: A speaker takes turns talking to a listener. The speaker talks for a short time and then stops to let another couple talk. There is never more than one speaker talking in the room, no one has to worry about two conversations mixing. The drawback is that it limits the practical number of discussions in the room (bandwidth wise).

CDMA: any speaker can talk at any time; however each uses a different language. Each listener can only understand the language of their partner. As more and more couples talk, the background noise (representing the noise floor) gets louder, but because of the difference in languages, conversations do not mix. The drawback is that at some point, one cannot talk any louder. After this if the noise still rises (more people join the party/cell) the listener cannot make out what the talker is talking about without coming closer to the talker. In effect, CDMA cell coverage decreases as the number of active users increases. This is called cell breathing.

Strengths and Weaknesses of IS-95 and GSM[4]

This graphic compares the market shares of the different mobile standards. 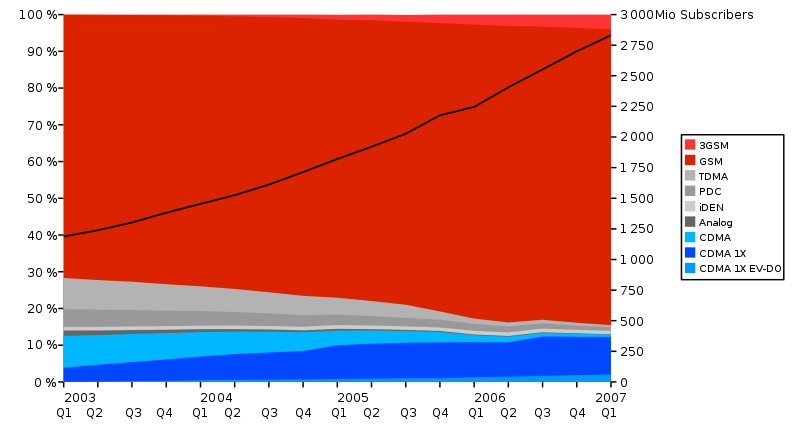 In a fast growing market, GSM/3GSM (red) grows faster than the market and is gaining market share, the CDMA family (blue) grows at about the same rate as the market, while other technologies (grey) are being phased out.

As a reference, a comparison of mobile and non-mobile wireless Internet standards follows.

Notes: All speeds are theoretical maximums and will vary by a number of factors, including the use of external antennae, distance from the tower and the ground speed (e.g. communications on a train may be poorer than when standing still). Usually the bandwidth is shared between several terminals. The performance of each technology is determined by a number of constraints, including the spectral efficiency of the technology, the cell sizes used, and the amount of spectrum available. For more information, see Comparison of wireless data standards.