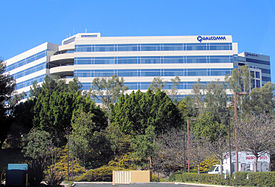 Qualcomm Research Center and Office of the Chief Scientist in San Diego, CA.

In 1990, Qualcomm began the design of the first CDMA-based cellular base station, based upon calculations derived from the CDMA-based OmniTRACS satellite system. This work began as a study contract from AirTouch which was facing a shortage of cellular capacity in Los Angeles. Two years later Qualcomm began to manufacture CDMA cell phones, base stations, and chips. The initial base stations were not reliable and the technology was licensed wholly to Nortel in return for their work in improving the base station switching. The first CDMA technology was standardized as IS-95. Qualcomm has since helped to establish the CDMA-2000 cellular standard.

In 1999, Qualcomm sold its base station business to Ericsson, and later, sold its cell phone manufacturing business to Kyocera. The company was now focused on developing and licensing wireless technologies and selling ASICs that implement them.

In 2011, Qualcomm announced that Steve Mollenkopf has been promoted to president and chief operating officer of the company, effective November 12. [4]

In 2000, Qualcomm acquired SnapTrack, the inventor of the assisted-GPS system for cellphones, branded as gpsOne. The Snaptrack patents describe how a cellphone can acquire a GPS signal rapidly using timing information sent from the base station. This reduces the searching time for geolocation from minutes down to roughly one second.

In October 2004, Qualcomm acquired Trigenix Ltd, a mobile user interface (UI) software development company, based in Cambridge, UK. After integrating the company, Qualcomm re-branded their interface markup language and its accompanying integrated development environment (IDE) as uiOne. In March 2009, Qualcomm informed their Cambridge engineering staff, mostly from the division working on uiOne, that they were going to be eliminated, and, in April that year, (after a legally required 30 day consultancy period) around 45 staff were let go. The rationale was stated as being a greater focus on deploying Flash Lite as a UI solution for Qualcomm-chipset-powered mobile phones. During 2004 Qualcomm also acquired Iridigm Corporation to form Qualcomm MEMS Technologies to develop low power reflective displays for mobile applications.

In 2006, Qualcomm purchased Flarion Technologies. Flarion is the creator of the Flash-OFDM wireless base station, and the inventor of the "flash" beaconing method and several other innovations in OFDM communications.

In 2009, Qualcomm purchased AMD's handset division.[5] This acquisition formed the basis for the later Adreno chips.[6]

In 2010, Qualcomm announced acquisition of San Francisco based iSkoot Technologies Inc. Qualcomm did not disclose financial details of the acquisition.[7]

In 2011, Qualcomm announced acquisition of Atheros Communications Inc. for about $3.2 billion in cash, broadening its lineup of Wi-Fi networking technology.[8] In early February 2011, Qualcomm acquired the Canadian company of Sylectus.[9]

In July 2011, Qualcomm acquired some assets of GestureTek. The company plans to use the gesture recognition technology in its Snapdragon processors.[10]

In November 2011, Qualcomm acquired a substantial portfolio of assets and technology from HaloIPT. The company provides wireless charging technology for electric road vehicles. [11]

Qualcomm is the inventor of CDMAone (IS-95), CDMA 2000, and CDMA 1xEV-DO, which are wireless cellular standards used for communications. The company also owns significant number of key patents on the widely adopted 3G technology, W-CDMA.[12] The license streams from the patents on these inventions, and related products are a major component of Qualcomm's business.

In June 2011, Qualcomm announced that it will be releasing a set of applications programming interfaces.[13]

Qualcomm participated in the development of the Globalstar satellite system along with Loral Space & Communications. It uses a low-earth orbit (LEO) satellite constellation comprising 44 active satellites. The system is used for voice telephony via hand-held satellite phones, asset tracking and data transfer using mobile satellite modems. The system was designed as a normal IS-95 system, and used the satellite as a "bent pipe" or "repeater" to transfer cellular signals from the handset to the terrestrial base station. Unlike the Iridium system, which routes phone calls between satellites, the Globalstar satellite must always be able to see both the handset and the base station to establish a connection, therefore, there is no coverage over the Earth's poles where there are no satellite orbits. Some of the Globalstar hardware is manufactured by Qualcomm. Like other satellite phone networks Globalstar went bankrupt in 1999, only to be bought up by a group of investors who are currently running the system. Those investors plan to launch a constellation supporting EV-DO in 2009.

In April 2006, a dispute between Reliance Communications and Qualcomm over royalty fees cost Qualcomm approximately $11.7b in market capitalization.[14] In July 2007, Reliance and Qualcomm decided to make peace and agreed to expand the use of CDMA technology in India.[15]

In June 2007, the U.S. International Trade Commission blocked the import of new cell phone models based on particular Qualcomm microchips. They found that these Qualcomm microchips infringe patents owned by Broadcom. Broadcom has also initiated patent litigation in U.S. courts over this issue.

At issue is software designed to extend battery life in chips while users make out-of-network calls. In October, an ITC administrative judge made an initial ruling that Qualcomm violated the Broadcom patent covering that feature and the commission later affirmed the decision.

Sprint Nextel Corp. is using a software patch from Qualcomm to get around a U.S. government agency ban on new phones with Qualcomm chips.

In August 2007, Judge Rudi Brewster held that Qualcomm had engaged in litigation misconduct by withholding relevant documents during the lawsuit it brought against Broadcom and that Qualcomm employees had lied about their involvement.[16][17]

The current UMTS air interfaces are for the most part based on Qualcomm patents, and royalties from these patents represent a significant part of Qualcomm's revenue.

The Chinese TDSCDMA 3G technology was developed primarily to avoid Qualcomm licensing fees, although Qualcomm claims that the Chinese technology still infringes on many Qualcomm patents.

October 2008, Nokia announced it will make a one time payment of $2.29 billion (US) to Qualcomm as part of its patent agreement with the company.

Gobi 3000 is the next hardware revision of the Gobi platform and it natively supports HSPA+. The model for Gobi 3000 is different. It is a reference design the OEMs can licence and produce their own Gobi 3000 compliant modules with their own extensions. Qualcomm does not sell any Gobi 3000 silicon. The reference design allows the same boiler plate hardware and software components for the basis of OEM chips which allow the OEMs to focus on innovations on the mobile broadband platform rather than getting bogged down with low-level RF implementations. Future Gobi platforms will support LTE natively. Currently, some Gobi 3000 modules support LTE through their own extensions. The most current info about Gobi can be found at www.gobianywhere.com.