Fujitsu
For the district in Saga, Japan, see Fujitsu, Saga.

Fujitsu Limited (富士通株式会社, Fujitsū Kabushiki-gaisha?) is a Japanese multinational information technology equipment and services company headquartered in Tokyo, Japan.[5] It is the world's third-largest IT services provider (after IBM and Hewlett-Packard) measured by revenues.[6]

Fujitsu's central focus is on providing IT-driven business solutions, but the company and its subsidiaries also offer a diversity of products and services in the areas of personal computing, telecommunications and advanced microelectronics. It has approximately 172,000 employees worldwide supporting customers in over 70 countries,[1]

[7] The company was established on June 20, 1935, under the name Fuji Tsūshinki Seizō (富士通信機製造, Fuji Telecommunications Equipment Manufacturing), a spinoff of the Fuji Electric Company, this in turn being a joint venture between the Furukawa Electric Company and German conglomerate Siemens founded in 1923. Despite its connections to the Furukawa zaibatsu, Fujitsu escaped the Allied occupation of Japan mostly unscathed.

In 1954, Fujitsu manufactured Japan's first computer, the FACOM 100, and in 1961 the transistorized FACOM 222. In 1967, the company's name was officially changed to the contraction Fujitsū (富士通).

In 1971, Fujitsu signed an OEM agreement with the Canadian company, Consolidated Computers Ltd (later Consolidated Computer Inc.) to distribute CCL's world leading data entry product, Key-Edit. Fujitsu joined both ICL who earlier began marketing Key-Edit in the British Commonwealth of countries as well as in both western and eastern Europe; and CCL's direct marketing staff in Canada, USA, London (UK) and Frankfurt. Mers Kutt, inventor of Key-Edit and founder of CCL, was the common thread that led to Fujitsu’s later association with ICL and Gene Amdahl.

In 1990, Fujitsu acquired 80% of the UK-based computer company International Computers Limited (ICL) for $1.29 billion (ICL was renamed Fujitsu Services in 2002).[8][9] In July 1991, ICL (Fujitsu) acquired more than half of the Russian company KME-CS (Kazan Manufacturing Enterprise of Computer Systems, Kazan, Tatarstan, Russia). The agreement was signed between Peter Bonfield (President of ICL) and Mintimer Shaimiev (President of the Tatarstan Republic).

In 1992, Fujitsu introduced the world's first 21-inch full-color plasma display. It was a hybrid, based upon the plasma display created at the University of Illinois at Urbana-Champaign and NHK STRL, achieving superior brightness.

In 1993, Fujitsu entered into a joint manufacturing venture with AMD to merge flash memory operations. The jointly-produced flash memory product was named Spansion. As part of the merger deal, AMD contributed its flash memory group, Fab 25 in Texas, its R&D facilities and assembly plants in Thailand, Malaysia and China; Fujitsu provided its Flash memory business division and the Malaysian Fujitsu Microelectronics final assembly and test operations.[10]

Amdahl became a wholly owned subsidiary of Fujitsu in 1997 and with it the DMR consulting group, based in Canada.

In 1998, Fujitsu was headquartered in Nakahara-ku, Kawasaki, Kanagawa Prefecture and maintained an office in Chiyoda, Tokyo.[11] 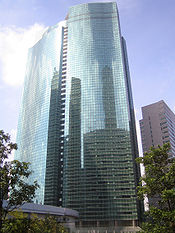 Shiodome City Center, Fujitsu's current headquarters, which was completed in 2003.[15]

In March 2009, Fujitsu Limited ("Fujitsu") announced that it has decided to convert FDK Corporation (Securities Code: 6955, "FDK"), currently an equity-method affiliate of Fujitsu, to a consolidated subsidiary from May 1, 2009 (tentative schedule) by subscribing to a private placement to increase FDK's capital. More details are available through FDK

The Fujitsu office in Bracknell, United Kingdom, formerly an ICL site and opened by HM the Queen in 1976.

Fujitsu Laboratories, Fujitsu's Research and Development division, has 1,300 employees and a capital of 5 Billion Yen. It is run by Tatsuo Tomita.[19]

The CEMEA&I region (Continental Europe, Middle East, Africa & India) plays an important role within the Fujitsu Group. Here, Fujitsu Technology Solutions - evolved from the former joint venture Fujitsu Siemens Computers – holds global responsibility for research, development and distribution of all x86 servers produced by Fujitsu. The company’s Dynamic Infrastructures strategy, was also born here. The term Dynamic Infrastructures stands for a comprehensive range of IT products, solutions, and services – from PCs and notebooks, to data center solutions, and Infrastructure as a Service and Managed Infrastructure services that dynamically adapt and adjust to the ever changing demands of today’s economy

Fujitsu Consulting is the consulting and services arm of the Fujitsu group, providing information technology consulting, implementation and management services.

Fujitsu Consulting was founded in 1973 in Montreal, Canada, under its original name "DMR" (an acronym of the three founder's names: Pierre Ducros, Serge Meilleur and Alain Roy[20] During the next decade, the company established a presence throughout Quebec and Canada, before extending its reach to international markets. For nearly thirty years, DMR Consulting grew to become an international consulting firm, changing its name to Fujitsu Consulting in 2002 after being acquired by Fujitsu Ltd.[21]

Fujitsu Ltd has a 46.05% shareholding in Fujitsu General, which manufactures and markets various air conditioning units and humidity control solutions.[22] A similar venture is sponsored by Fujitsu in India, called General Airconditioners. 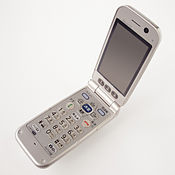 Fujitsu offers a highly reliable public cloud service delivered from data centers in Japan, Australia, Singapore, the United States, the United Kingdom and Germany based on its Global Cloud Platform strategy announced in 2010.[23] The platform delivers Infrastructure-as-a-Service (IaaS) - virtual information and communication technology (ICT) infrastructure, such as servers and storage functionality - from Fujitsu's data centers. In Japan, the service, which had been offered as the On-Demand Virtual System Service (OViSS), is now known as FGCP/S5. Globally, the service is delivered under the name Global Cloud Platform.

Fujitsu has also launched a Windows Azure powered Global Cloud Platform in a partnership with Microsoft.[24] This offering, delivering Platform-as-a-Service (PaaS), is known as FGCP/A5 in Japan, and is operated from a Fujitsu data center in Japan. It offers a set of application development frameworks, such as Microsoft .NET, Java and PHP, and data storage capabilities consistent with the Windows Azure platform provided by Microsoft. The basic service consists of compute, storage, Microsoft SQL Azure, and Windows Azure AppFabric technologies such as Service Bus and Access Control Service, with options for interoperating services covering implementation and migration of applications, system building, systems operation, and support.

Fujitsu also offers local cloud platforms, such as in Australia,[25] that provide the ability to rely on its domestic data centers which keep sensitive financial data under local jurisdiction and compliance standards.

The old slogan "The possibilities are infinite" can be found below the company's logo on major advertisements and ties in with the small logo above the letters J and I of the word Fujitsu. This smaller logo (∞), represents the symbol for infinity. As of April 2010, Fujitsu is in the process of rolling out a new slogan focused on entering into partnerships with its customers and retiring the "possibilities are infinite" tagline. The new slogan is "shaping tomorrow with you".[26]

Fujitsu reports that all its notebook and tablet PCs released globally comply with the latest Energy Star standard.[27]

Greenpeace's Cool IT Leaderboard of December 2010 "evaluates global IT companies on their leadership in the fight to stop climate change" and ranks Fujitsu 3rd out of 17 leading manufacturers, on the strength of "well-developed case study data of its solutions with transparent methodology" and "[standing] out as one of the only companies to set a future [Carbon Dioxide] savings goal for its product solutions."[28]

In Greenpeace's Guide to Greener Electronics of October 2010 the company ranks 13th out of 18 leading electronics manufacturers.[29] Greenpeace criticises Fujitsu for its slow progress in phasing out polyvinyl chloride (PVC) and brominated flame retardants (BFR).[30] Fujitsu is eliminating PVC from its products by the end of 2013 but has not committed to abolishing all BFRs.[31]