Mamiya Digital Imaging Co., Ltd. (マミヤ・デジタル・イメージングー株式会社, Mamiya Dejitaru Imejingu Kabushiki-gaisha?) is a Japanese company that today manufactures high-end cameras and other related photographic and optical equipment. With headquarters in Tokyo, it has two manufacturing plants and a workforce of over 200 people. The company was founded in May 1940 by camera designer Seiichi Mamiya (間宮精一) and financial backer Tsunejiro Sugawara.

Mamiya originally achieved fame for its professional medium-format film cameras such as the Mamiya 6 and the Mamiya Press series. It later went on to develop the industry workhorse RB67 series, the RZ67 and the twin-lens reflex C-220/C-330, used by advanced amateur and professional photographers. Mamiya also heralded the establishment of the 645 format for professional photographers, of which its current 645 model is the 645DF. Mamiya has been recently developing digital products, namely the Mamiya ZD products and a new D range of quality lenses.

Many Mamiya models over the past six decades have become collectors' items. The earliest Mamiya-6 medium-format folding camera, the 35 mm Mamiya-Sekor 1000DTL, the lightweight 35 mm Mamiya NC1000, the 6×6cm medium-format C series of interchangeable-lens twin-lens reflex (TLR) cameras, and the press cameras of the Super/Universal series are highly valued. Mamiya also manufactured the last models in the Omega line of medium format cameras. In 2009, Phase One, medium format digital camera manufacturer from Denmark purchased a major stake in Mamiya and the two companies develop products together.

In 1970, Mamiya introduced the RB67 6×7 cm professional single lens reflex (SLR). The RB67, a large, heavy, medium-format camera with built-in closeup bellows was innovative and successful. Previous medium-format professional cameras used the square 6×6cm format which did not require the camera to be rotated for photographs in portrait orientation, problematical with large and heavy cameras when tripod-mounted. The RB67 had a rotating back which enabled photographs to be taken in either landscape or portrait orientation without rotating the camera, at the expense of additional weight and bulk. The RB67 soon became widely used by professional studio photographers.

The RB67 was followed by the improved RZ67 in 1982. These cameras established Mamiya as medium-format professional camera manufacturers, together with Hasselblad, Rollei, Bronica and Pentax.

In the 1990s, Mamiya introduced the Mamiya 6 and Mamiya 7 (6x6cm and 6x7cm, respectively) rangefinder cameras, compact and quiet cameras which are reputed for the extremely high optical quality of their lenses.

The Mamiya ZD and the Mamiya ZD Digital Back were announced in September 2004 and first shipped to Europe in March 2006. The ZD is a large, professional digital SLR camera with a 22 megapixel digital sensor manufactured by Dalsa. The ZD Digital Back fits the 645AFD camera models and provides it with digital functionality.

Mamiya started manufacturing 135-film cameras in 1949, with 135-film point-and-shoot compact cameras being introduced later. The excellent Mamiya-35 series of rangefinder cameras was followed by the Mamiya Prismat SLR in 1961 and the Mamiya TL/DTL in the mid-to-late 1960s. The SX, XTL and NC1000 were other 135-film SLR camera models introduced by Mamiya. One of Mamiya's last 135-film SLR designs was the Z-series. The original entry-level ZE model was an aperture-priority-only SLR; the ZE-2 added manual exposure; the ZE-X added shutter priority and full program automated mode, and (with a dedicated flash and an EF-series lens) focus-priority flash exposure). In these models the aperture ring had no direct connection to the diaphragm, allowing the camera body to override the set aperture, and the lenses could communicate a considerable amount of information to the camera body via electrical contacts on the mount.

The Mamiya ZM, introduced in 1982, was essentially an advanced version of the ZE-2, with some of the features of the ZE-X. It was the last Mamiya 135-film camera produced. It had an aperture-priority automatic time control, based on center-weighted TTL readings, an automatic shutter-speed range from 4 seconds to 1/1000, and a manual range from 2 seconds to 1/1000. Visual and audio signals indicated over- or under-exposure, pending battery failure, or excessive camera shake. Metering modes, shutter release, self-timer, manual time settings and the ergonomics of the camera body were also improved.

In 1984 Osawa, one of Mamiya's major distributors, filed for the Japanese equivalent of bankruptcy and, soon after, Mamiya discontinued 135-film camera production to focus on the medium-format professional market.

In the United States, the trademark for "Mamiya" is not owned by the original company in Japan but rather by a wholly separate entity called Mamiya America Corporation, (M.A.C). As such, any and all products that bear the name "Mamiya" are controlled by them and has thus resulted in a considerable rise in retail pricing when comparing the same products to ones sold outside the US. M.A.C. also owns the tradename "Sekonic" (light meters). 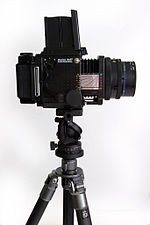 The 22 megapixel ZD Back for the 645AFD II and, with an adapter, the RZ67 Pro IID, was announced at the 2006 Photokina. In March 2008, Mamiya announced new products 80 mm D lens, 150 mm D lens and 45-90mm D lens. These, along with the 645AFDIII, and an adapter to use digital backs with the RB camera series became available later in the year.

Mamiya introduced the Mamiya ZD, which was a compact medium-format camera, in 2004. Rather than taking the form of a digital back solution, it was all built into one unit, much like a 35mm camera. This camera utilized the Mamiya 645AF lenses and had a resolution of 22mp. The solution had technical difficulties and became delayed. At the same time, Mamiya also announced a ZD back which had the same specification but was intended to be used with the Mamiya 645AFDII / AFDIII. The ZD back was even more delayed and, once it was introduced, it was already outdated.