The company's global management is based in Hammersmith, London, and it has research and development teams in Lund, Tokyo, Mexico City, Beijing, and Redwood Shores in the US. By 2009, it was the fourth-largest mobile phone manufacturer in the world after Nokia, Samsung and LG.[5] The sales of products largely increased due to the launch of the adaptation of Sony's popular Walkman and Cyber-shot series.

In the United States, Ericsson partnered with General Electric in the early nineties, primarily to establish a US presence and brand recognition.

Ericsson had decided to obtain chips for its phones from a single source—a Philips facility in New Mexico. In March 2000, a fire at the Philips factory contaminated the sterile facility. Philips assured Ericsson and Nokia (their other major customer) that production would be delayed for no more than a week. When it became clear that production would actually be compromised for months, Ericsson was faced with a serious shortage.[7] Nokia had already begun to obtain parts from alternative sources, but Ericsson's position was much worse as production of current models and the launch of new ones was held up.[8]

Ericsson, which had been in the mobile phone market for decades, and was the world's third largest cellular telephone handset maker, was struggling with huge losses. This was mainly due to this fire and its inability to produce cheaper phones like Nokia. To curtail the losses, it considered outsourcing production to Asian companies that could produce the handsets for lower costs.[according to whom?]

Speculation began about a possible sale by Ericsson of its mobile phone division, but the company's president said it had no plans to do so. "Mobile phones are really a core business for Ericsson. We wouldn't be as successful (in networks) if we didn't have phones", he said.[citation needed]

Background of the joint venture

Sony was a marginal player in the worldwide mobile phone market with a share of less than 1 percent in 2000.

By August 2001, the two companies had finalised the terms of the merger announced in April. The company was to have an initial workforce of 3,500 employees.

Ericsson's market share actually fell and in August 2002, Ericsson said it would stop making mobile phones and end its partnership with Sony if the business continued to disappoint. However, in January 2003, both companies said they would inject more money into the joint venture in a bid to stem the losses.

Sony Ericsson's strategy was to release new models capable of digital photography as well as other multimedia capabilities such as downloading and viewing video clips and personal information management capabilities. To this end, it released several new models which had built-in digital camera and colour screen which were novelties at that time. The joint venture, however, continued to make bigger losses in spite of booming sales. The target date for making a profit from its first year to 2002 was postponed to 2003 to second half of 2003. It failed in its mission of becoming the top seller of multimedia handsets and was in fifth-place and struggling in 2005. 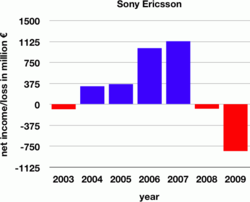 On March 1, 2005, Sony Ericsson introduced the K750i with a 2 megapixel camera, as well as its platform mate, the W800i, the first of the Walkman phones capable of 30 hours of music playback, and two low-end phones.

On May 1, 2005, Sony Ericsson agreed to become the global title sponsor for the WTA Tour in a deal worth $88 million US dollars over 6 years. The women's pro tennis circuit was renamed the Sony Ericsson WTA Tour. Just over a month later on June 7, it announced sponsorship of West Indian batsmen Chris Gayle and Ramnaresh Sarwan.

In October 2005, Sony Ericsson presented the first mobile phone based on UIQ 3, the P990.

On January 2, 2007, Sony Ericsson announced in Stockholm that it would have some of its mobile phones made in India, and that its two outsourcing partners, Flextronics and Foxconn would manufacture ten million mobile phones per year by 2009. CEO Miles Flint announced at a press conference held with India's communications minister Dayanidhi Maran in Chennai that India was one of the fastest growing markets in the world and a priority market for Sony Ericsson with 105 million users of GSM mobile telephones.

Sony Ericsson has struggled since the arrival of Apple's iPhone in the third quarter of 2007. Its handset shipments have fallen from a high of 30.8m in Q4 2007 to only 8.1m in Q1 2011, according to its financial reports.[9] The company had made net losses in six of the 15 quarters and seen its cash reserves shrink from €2.2bn to €599m, after taking a €375m cash injection from its joint owners. The eclipse of the Symbian operating system, initially by Apple's iPhone, and then by Google's Android, has affected Sony Ericsson's position in the market.

Sony Ericsson was overtaken by its South Korean rival LG Electronics in Q1 2008. Sony Ericsson's company's profits fell significantly by 43% to €133 million (approx. US$180 million), sales falling by 8% and market share falling from 9.4% to 7.9%, despite favourable conditions that the handset market was expected to grow by 10% in 2008. Sony Ericsson announced another profit warning in June 2008[10] and saw net profit crash by 97% in Q2 2008, announcing that it would cut 2,000 jobs, leading to wide fear that Sony Ericsson is on the verge of decline along with its struggling rival, Motorola.[11] In Q3 the profits were much on the same level, however November and December saw increased profits along with new models being released such as the C905 being one of the top sellers across the United Kingdom.

Sony Ericsson has, as of July 18, 2008, approximately 9,400 employees and 2,500 contractors worldwide. Bert Nordberg is the president of the company since October, 2009. Sir Howard Stringer, CEO and President, Sony Corporation, is chairman of the board.

On October 27, 2011, Sony announced that it will acquire Ericsson's stake in Sony Ericsson for €1.05 billion ($1.47 billion), making the mobile handset business a wholly owned subsidiary of Sony. The transaction's completion is expected to occur in January 2012.[23][24][25]

Sony Ericsson posted its first profit in the second half of 2003. Since then, the sales figures from phones have been: 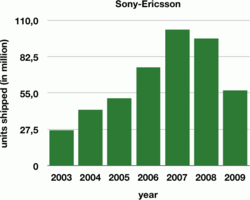 According to the Swedish Magazine M3s issue 7/2006 Sony Ericsson is the best-selling phone brand in the Nordic countries, followed by Nokia.

During the announcement of Sony Ericsson K850, W960 and W910 some review sites have shown that those mentioned phones and future mid-range or better phones will have Media to replace the standard File Manager which will be moved to the Organiser of the phone. The Media manager possesses a UI that resembles the XMB interface found on Sony TV, PS3, and PSP products. The mobile developer site confirmed from their spec sheets and white papers that the XMB media manager is standard to the phones running Java Platform 8 also known as A200 Platform and Symbian devices like Sony Ericsson Satio and Sony Ericsson Vivaz.

Sony Ericsson ranks 6th out of 15 leading electronics makers in Greenpeace’s Guide to Greener Electronics that assesses companies' policies on climate and energy, sustainability and how green their products are. The company scores 4.2/10 and is one of the top scorers in the Products category, gaining maximum points for the energy efficiency of its phones and doing well for its avoidance of hazardous substances in its products. [37] Sony Ericsson is ahead of many of its competitors in eliminating chemical substances in its products and is currently finalising the phase out of antimony, beryllium, phthalates and the very small remaining use of BFR.[38]

However, Greenpeace criticizes Sony Ericsson for not having a plan to reduce its greenhouse gas emissions through energy efficiency or more use of renewable energy. The guide also states that the company still needs to report the amount of recycled plastic sourced as a percentage of all plastics used. [37]

In June 2009, Sony Ericsson launched its first GreenHeart series device, the C901, which indirectly emits a 15% less of CO2 during its fabrication and usage, compared to other SE phones. It is also packed in a small box without paper manual, includes an eco-charger, and its cover is made of recycled plastic.[39]

During 2010, in 11 months, Sony Ericsson's Facebook fan count rose from 300,000 to 3.9 million to become the 40th-largest brand on the social networking site. The company aims to capitalise on this fanbase and increase engagement by profiling these fans and matching them to dedicated content. It will also analyse the top commenters on the Facebook page and ensure engagement through special content and offering these fans the chance to visit Sony Ericsson offices.[40]

As of 2011, Sony Ericsson sponsors the UEFA Champions League and the Sony Ericsson Open tennis tournament in Miami. According to the head of global marketing partnerships,[41] Stephan Croix, “our sport sponsorships allow us to promote our phones in a subtle and authentic way to our fanbase. Our promise to fans is to enrich their experience during the game but also before and after.”