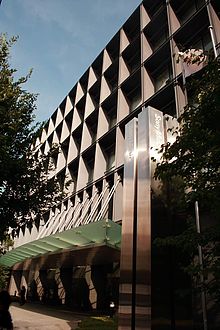 Releases on Columbia Records in other countries appear on Sony Records in Japan because a competitor, Columbia Music Entertainment, owns the rights to the trademark there.

Sony Music Entertainment Japan was officially incorporated in March 1968[3] as a Tokyo-based 50/50 joint venture between Sony Corporation and U.S. conglomerate CBS to distribute the latter's music releases in Japan. The company was incorporated as CBS/Sony Records and with Sony co-founder Akio Morita as president.[4][5][6]

Norio Ohga was part of the management team from the formation of the company and served as president and representative director since April 1970.[7][8] In 1972, when CBS/Sony was generating robust profits, Ohga was named chairman and at the same time gained further responsibility and influence within Sony. He would continue to work for the music company one morning a week.[9] In 1980 Toshio Ozawa succeeded Ohga as president.[10]

In January 1988, after more than a year of negotiations, Sony acquired CBS Records and the 50% of CBS/Sony Group that it did not already own.[11]

Shugo Matsuo was named new president in January 1992, replacing Toshio Ozawa, who was appointed to the post of chairman.[13]

Shigeo Maruyama was appointed to the new post of CEO on October 1, 1997 and replaced Kunugi as president in February 1998.[15]

As of 2007, Naoki Kitagawa is the current CEO of the group.

The company's leading role on the Japanese market was increasingly challenged by labels such as Avex (where SMEJ formerly owned 5 percent of shares).[15] Net sales for the fiscal year ending March 31, 1997 were down 10% to 103 Billion Yen, while net income fell 41% to 7.7 billion yen.[16] The market share at that time was less than 18%.[16] In August 1997, Dreams Come True, till then Sony Music Entertainment Japan's best-selling act, signed a worldwide multi-album deal with competing U.S. label Virgin Records America.[17]

Since then it was said that SMEJ ceded to Avex's challenge,[18] but SMEJ bounced back and regained leadership from its indie rival.