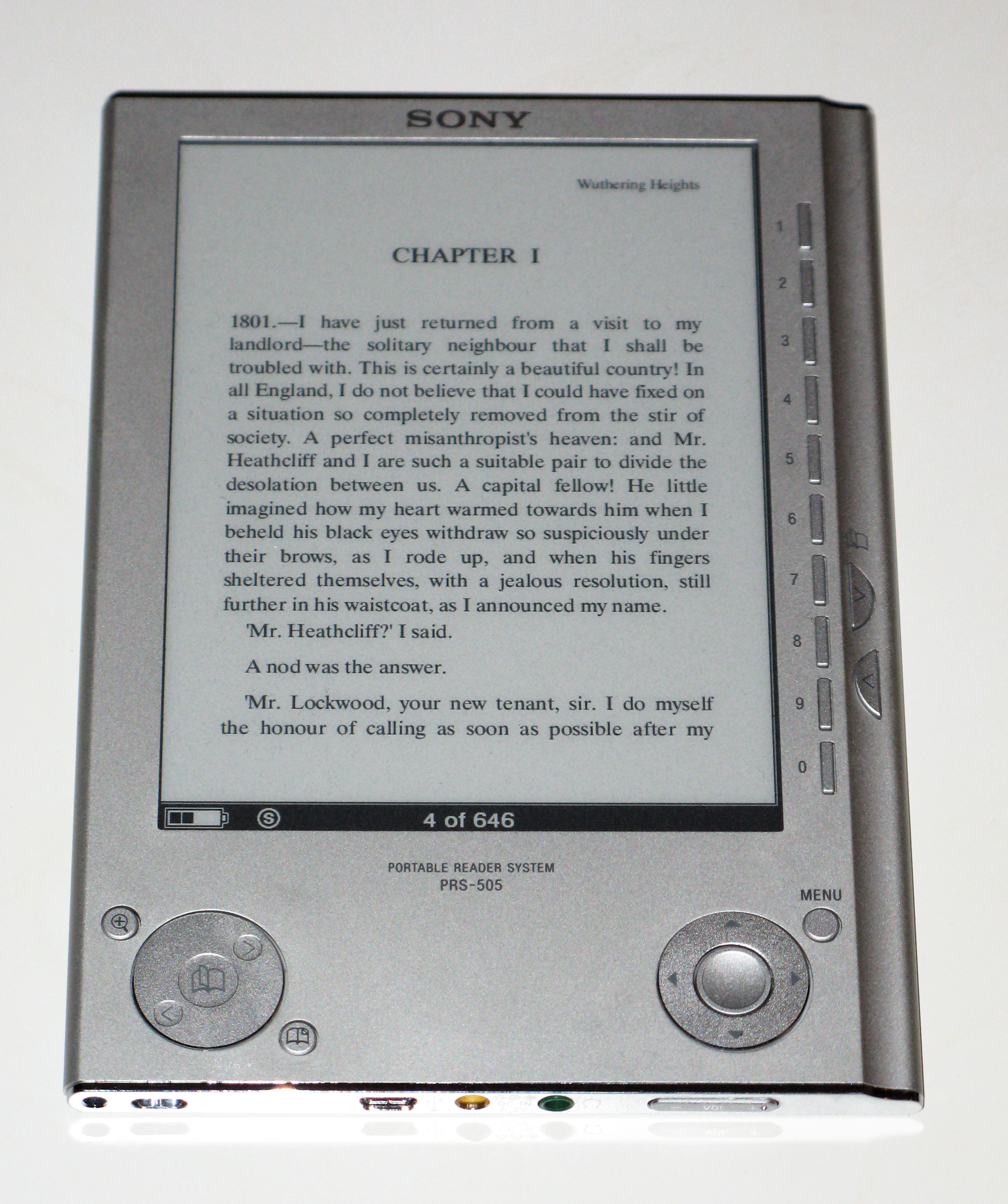 
The PRS-500 Reader is an available in the since September , in since April and the PRS-505 in the since , . It uses an display developed by , that has 166 dpi resolution, four levels of , is viewable in direct sunlight, requires no power to maintain the image, and is usable in portrait or landscape orientation. Like real paper, it may be difficult to read from in low-light conditions, as the unit has no backlight. The reader uses an -like interface to purchase books from eBook store. It also can display Adobe s, format, personal documents, blogs, newsfeeds, s, and Sony's proprietary ("BroadBand eBook") format.

On , , announced that the Reader would be available in the with a launch date of , . is the official retail partner and the Reader is available for pre-order from selected stores.

The Reader can play unencrypted and AAC audio files. Unlike its close cousin, the LIBRIé, the Sony Reader offers no way for the user to annotate a digital book due to lack of a keyboard.

The rules of the Reader allow any purchased eBook to be read on up to six devices (at least one of those 6 must be a PC). Although you cannot totally share purchased eBooks on other people’s devices and accounts, you will have the opportunity to register five Readers to your account and share your books accordingly. At this time Sony has no plans to introduce time-expiring books in the U.S.

It competes with other e-paper devices— the , iRex , the , and CyBook by Bookeen.

Since , Readers have been on display and for sale at Borders bookstores throughout the US. Borders had an exclusive contract for the Reader until the end of 2006. From April 2007, Sony Reader has been sold in the US by multiple merchants, including , Costco, Borders and . The eBook Store from Sony is only available to U.S. or Canadian residents or to customers who purchased a U.S.-model reader with bundled eBook Store credit.

On , , Sony announced the PRS-505, an updated version of the Reader. The '505 keeps the 6" display of the original Reader, but uses an improved version of E Ink's imaging film with faster refresh time, brighter white state, and 8-level grayscale.

Other new product features include auto-synchronization to a folder on a host PC, support for the USB Mass Storage Device profile, and full USB charging capability (the PRS-500 could only be recharged via USB if the battery was not fully drained, and if the Sony Connect Reader software was installed on the host PC). Also adding books to "Collections" (a feature to organize and group book titles) is now possible on the storage card, unlike the PRS-500 model.

DRM-free Text: BBeB Book (LRF), , TXT, RTF, ePub. s in PDF files formatted for 216 x 280 mm (8.5 x 11 inch) pages may be too small to read comfortably. Such files can be reformatted for the Reader screen size with Professional, but not by software. The Reader does not directly support DOC format. The 'CONNECT Reader' application uses Word to convert the .DOC files to RTF before sending them to the Reader.

Image: , , PNG, and BMP (Loading an animated GIF will freeze the Reader)

: Limited to 20 featured blogs such as Engadget and Wired, no ability to add others and no auto-update (as of )

The Reader supports TXT and RTF documents with Latin character set only. Other character sets (such as , for example) are not displayed correctly, but Cyrillic patches are available for n users (see the site [http://www.the-ebook.org] ). Sony Customer Support have confirmed that units sold in the US only work with Latin characters (as of ).

Sony Reader comes bundled with Sony's proprietary software called Connect, is similar to and requires or later, an 800MHz , 128Mb of , and 20Mb of space. Sony Connect software does not work on .

is not officially supported on or based systems, although when the device is connected it grants access to its internal as though it were a device (on the 505 only) allowing the user to transfer files directly.

Several third-party tools exist for the Sony Reader. For example, the PRS Browser for Mac OS X from allows Macintosh users to manage content on the Sony Reader. Users can also use the library and utility calibre (formerly known as libprs500) written by Kovid Goyal to communicate with the Reader and manage their digital library. This utility has both a command line and graphical interface, and is available for Windows, Mac OS X and Linux.