Megabyte
This article is about the unit of data. For the ReBoot character, see Megabyte (ReBoot).

The megabyte is a multiple of the unit byte for digital information storage or transmission with two different values depending on context: 1048576 bytes (220) generally for computer memory;[1][2] and one million bytes (106, see prefix mega-) generally for computer storage.[1][3] The IEEE Standards Board has decided that "Mega will mean 1 000 000", with exceptions allowed for the base-two meaning.[3] In rare cases, it is used to mean 1000×1024 (1024000) bytes.[3] It is commonly abbreviated as Mbyte or MB (compare Mb, for the megabit).

The term "megabyte" is commonly used to mean either 10002 bytes or 10242 bytes. This originated as compromise technical jargon for the byte multiples that needed to be expressed by the powers of 2 but lacked a convenient name. As 1024 (210) approximates 1000 (103), roughly corresponding SI multiples began to be used for binary multiples. By the end of 2007, standards and government authorities including IEC, IEEE, EU, and NIST proposed standards for binary prefixes and requiring the use of megabyte to strictly denote 10002 bytes and mebibyte to denote 10242 bytes. This is reflected in an increasing number of software projects using the new definitions, but some file managers still show file sizes using the binary interpretation (10242 bytes). The term remains ambiguous and it can follow any one of the following common definitions:

Semiconductor memory doubles in size for each address line added to an integrated circuit package, which favors counts that are powers of two. The capacity of a disk drive is the product of the sector size, number of sectors per track, number of tracks per side, and the number of disk platters in the drive. Changes in any of these factors would not usually double the size. Sector sizes were set as powers of two (256 bytes, 512 bytes and so on) for convenience in processing. It was a natural extension to give the capacity of a disk drive in multiples of the sector size, giving a mix of decimal and binary multiples when expressing total disk capacity. 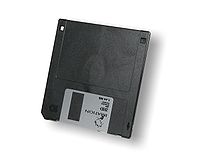 Depending on compression methods and file format, a megabyte of data can roughly be: