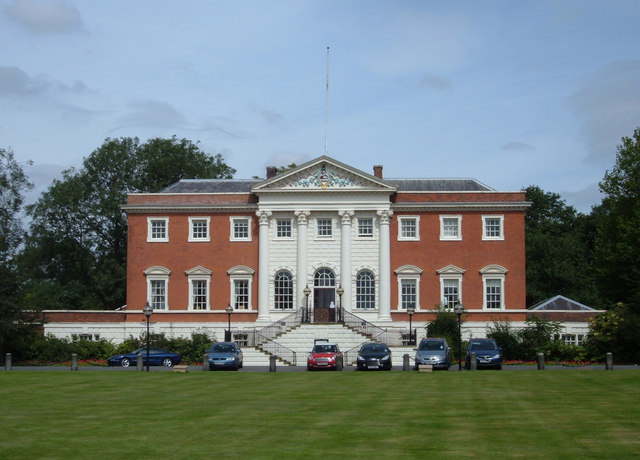 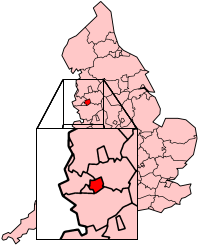 The expansion and urbanisation of Warrington largely coincided with the , particularly after the Mersey was made navigable in the 18th century.

The runs north to south through the town, and the to railway (the Cheshire Lines route) west to east. The cuts through the south of the borough (west to east). The M6, M56 and s form a partial box around the town.

People born (or living) in Warrington are known as "Warringtonians"

Warrington has been a major crossing point on the since ancient times and there was a Roman settlement at Wilderspool [.Hinchcliffe J & Williams J H, ROMAN WARRINGTON: Excavations at Wilderspool 1966 - 9 & 1976,Brigantia Monograph No 2, Manchester University 1992 ] . In times Warrington's importance was as a bridging point of the River Mersey, and it was a fulcrum in the . The armies of and the both stayed near the old town centre (the parish church area). Popular legend has it that Cromwell lodged in the building which survives on Church Street as The Cottage Restaurant, though it is likely that the actual place was nearby, possibly next door. The Marquis of Granby public house bears a plaque stating that the 'had his quarters near this site'. Dents in the walls of the parish church are rumoured to have been caused by the s from the time of the Civil War.

Warrington was a centre of (particularly ), , , and industries. [Rylands, Rylands of Warrington, 1805-1955: The Story of Rylands Brothers Limited, Harley Publishing, 1956 ]

Heavy industry declined in the 1970s and 1980s but the growth of the new town around Warrington led to a great increase in employment in light industry, distribution and technology. Travel-to-work patterns are unusual, with many residents working outside the borough and many employees living elsewhere.

Tim Parry's father founded The Peace Centre (formerly the Tim Parry Jonathan Ball Peace Centre) as part of a campaign to reconcile communities in conflict. The centre opened on the seventh anniversary of the bombing in 2000.

Warrington is notable in political history for being the first place to field a candidate for the then newly-formed Social Democratic Party; former Home Secretary stood for Parliament in 1981 but lost to Labour Party candidate Doug Hoyle by a small number of votes.

However, many people, particularly Americans, will remember Warrington best as the location of Burtonwood RAF base, one of (if not the) largest (RAF) bases in England and the largest base outside the United States. During World War II, Burtonwood was visited by major celebrities like and who entertained the s. The base was closed in 1993.

There was a further RAF training camp at , a Royal Naval air base at Stretton and an army base at the Peninsula Barracks in O'Leary Street, now used by the .

Historically part of Lancashire, Warrington was incorporated as a in 1847 under the . Warrington acquired status upon reaching a population of 50,000 in 1900 and until 1974 was known as the . As part of proposed local government reforms of England, in 1969 the suggested merging Warrington with either or metropolitan counties. Lobbying by the borough council averted this. But, since these County boundary changes were to make Warrington non-contiguous with Lancashire, under the local government reforms of 1974, Warrington, incorporating Urban District and part of from Cheshire, and part of , was made a borough within .

On April 1, 1998 Warrington became an independent , though it is still served by and , and forms part of Cheshire for ceremonial purposes, such as the Lord Lieutenancy. The current borders of Warrington Borough cover the former of Warrington, Lymm Urban District, and part of Urban District, part of and part of . Warrington has applied unsuccessfully for city status, the most recent attempt being after the opening of the Peace Centre as a "City for Peace".

In spite of its proximity to significant retail areas in Manchester, Liverpool, Chester and the out-of-town Trafford Centre, Warrington continues to have one of the larger shopping centres in North West England. Despite the competition, Warrington has seen an increase in its customer trade, due in part to the modernisation of the town centre. It has a shopping mall (Golden Square) first opened in 1974, which has been extended to include a store, and a new bus station. The old Cockhedge Textile Mill was demolished and replaced by another shopping mall. The main shopping streets are Buttermarket Street, Horsemarket Street, Sankey Street and Bridge Street. Where these four streets intersect at Market Gate, there is an award-winning redevelopment with a large fountain and "guardians" (known locally as "the skittles") designed by . The town also has a large indoor market, and several other small shopping malls, such as Hatters Row. In the surrounding modern suburbs, there are several shopping areas, from small groups of shops to malls such as Birchwood Mall. chose Warrington as the location for their first store when they came to the UK; the store is located in the large out-of-town shopping area of Gemini, which has a large (the biggest outside London), , and Next outlets.

Warrington is home to one of the most important strategic development projects in Europe in the close to the . It will be a vibrant, active and sustainable business community which is to be developed in stages over the next 30 years. The site for this is the 575 acres of space on the former . The cost of this is set to reach £1billion.

Other developments in Warrington include the Wire Works on Winwick Street which is set to transform the gateway into the town centre with a mixture of retail, cafes, bars, apartments, and an 8-screen cinema.

The town has two main railway stations. Bank Quay is on the main West Coast Main Line between London Euston and Glasgow Central and the Manchester Piccadilly to via Chester line. Central is on the Liverpool to Manchester (via and Warrington) line with through services to the North East and to East Anglia. Bank Quay is much altered, but Central (built 1873) is of some architectural merit, featuring polychromatic brickwork. Both have undergone some refurbishment. There are also railway stations in the suburbs at Padgate, Sankey and Birchwood.

The town lies close to the , and motorways and midway between Liverpool and Manchester airports.

, one of the few to survive in public ownership, runs most bus services within the town. and Northwestern provide bus links to surrounding towns and cities such as Manchester, the Trafford Centre, Liverpool, St Helens, Runcorn, Widnes and Chester. A new real-time passenger information system has been installed. A new bus station known as Warrington Interchange opened in 2006 at the Golden Square Shopping Centre.

The River Mersey runs through the heart of the town dividing it in two. There are only two main thoroughfares crossing the Mersey in Warrington: at Bridge Foot and at the Kingsway Bridge. Before the M6 was built, these routes were very busy with through traffic.

The runs through the south of the town; three swing bridges and a high-level cantilever bridge provide crossing points, and another high-level crossing is planned downstream nearer to . Although shipping movements on the ship canal are far less frequent than in years past, they can cause severe delay to local road traffic. The picturesque runs through the borough from the scenic village of Lymm to Walton Hall and Gardens, a local park/leisure area.

.There is also located at Winwick Quay, and indoor paintball. An indoor karting centre is located near to Bank Quay. A Laser Quest arena and a snooker club can also be found in Warrington, both located close to the town centre. Gulliver's Theme Park is located in Old Hall.

A number of festivals, carnivals, and s are held annually in the Warrington area. Warrington Walking Day - originally a Sunday School festival - is held on the closest Friday to the last day of June, and the town centre is closed to traffic as churches walk together through the streets. [Forrest David, Warrington Walking Day: A Brief History]

Warrington also has many musical groups, including , and the .

is the town's premier sports in the form of who are nicknamed "The Wire" because of Warrington's history of wire making. The club moved in 2003 to the , leaving its home for over a century, . are the only team to have played every season in the top flight of . The town is also home to who play their home matches at . The Wizards are currently in the . Warrington is represented in the leagues by Crosfields ARLFC, Bank Quay Bulls ARLFC, Rylands ARFLC, Woolston Rovers ARLFC, Latchford Albion ARLFC, Burtonwood Bulldogs ARLFC and Westbrook Tigers ARLFC.

Football is represented by at , next to the . The club has several nicknames including Town, Yellows, Wire and Warriors. Warrington Town are currently in the .

Liverpool FC Reserves also play in Warrington at the .

Warrington Athletic Club is based at Victoria Park, where a new eight-lane synthetic track was built in 1998, after the original track was destroyed in a fire the previous year.

racing, formerly known as Dirt Track racing was staged in Warrington in its pioneering era between 1928 and 1930. The track entered a team in the 1929 English Dirt Track League and the 1930 . Efforts to revive the venue in 1947 failed to materialise.

The high schools throughout the borough are located at:, , (known as ), two in (Sir Thomas Boteler High School and High School), Sankey, , , Penketh, ('s High School), Orford ( High School), and Woolston [from Warrington Borough Council's Community Information Resource] . Woolston High School is to be closed in 2012.

There are also 74 in the borough, all of which feed into at least one of the above. [Count from Warrington Borough Council's community Information resource] .

Sites of interest in Warrington include:
*The Town Hall (and its golden gates), formerly the home of the Philips family, Bank Hall (built 1750), and their scion, , the artist. [cite web | url=http://www.warrington.gov.uk/Leisureandculture/Localhistoryandheritage/Town_Hall_Guide.aspx | title=Town Hall Guide | publisher = Warrington Borough Council | year=2007 | accessdate=2007-05-23]
*The Academy, a s' institute where taught and which is now, after being moved from its original location, the offices of a local newspaper.
*"Cromwell's Cottage" (17th century), which is said to have visited.
*The 14th century Parish Church of St Elphin, largely a Victorian rebuild with a convert|281|ft|m|sing=on , the sixth largest in the UK.
*, Grade I listed medieval church.
*, Grade I listed medieval church.
*Holy Trinity Church, 1758, Grade II* listed Georgian church at Market Gate.
*St Ann's Church, 1869, Grade II* church designed by John Douglas, now a rock climbing centre.
*St Mary's Church, Grade II church designed by and in Buttermarket.
*, Grade II listed building and one of the oldest municipal museums in the UK.
*The row of late Victorian terracotta shops on Bridge Street. [cite web | url=http://www.warrington.gov.uk/Images/6_Bridge_St_tcm31-3124.pdf | title=Bridge StreetConservation Area | publisher = Warrington Borough Council | year=2000 | accessdate=2007-05-23]
*The Woolworth's Building in Sankey Street (at least the upper storeys).
*The style Synergy nightclub which was originally a large cinema.
*The industrial modernist Soapworks.
*The Cheshire Lines railway warehouse, now redeveloped as apartments.
*The , a and a . [English Heritage] .
*The Barley Mow, established in 1561, the oldest pub in Warrington.
*The , home to one of the few remaining organs.
*
* The home of
*Bewsey Old Hall, a rebuilt medieval manor house.
* store which is located near the Gemini retail park. The first of the IKEA chain to be built in the UK. [cite web | url =http://www.guardian.co.uk/g2/story/0,,1240464,00.html |title = Ikea: The History | publisher= The Guardian | year=2004 | accessdate=2007-05-23]