The ceremonial counties are areas of England to which are appointed a Lord Lieutenant, and are defined by the government as counties and areas for the purposes of the Lieutenancies Act 1997 with reference to the metropolitan and non-metropolitan counties of England and Lieutenancies Act 1997. They are often used in a geographic reference frame, and in this capacity are sometimes called geographical counties.[1] 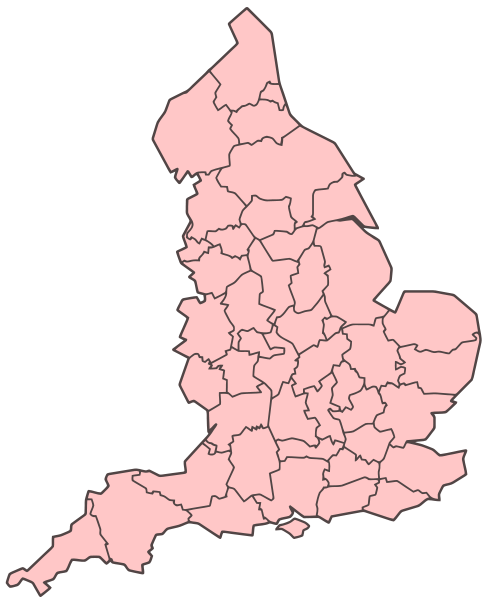 Not shown: City of London

Ceremonial counties before the creation of Greater London in 1965 (showing counties corporate as part of the main counties.)

The concept of the counties used for the Lieutenancy differing from those used for administrative purposes is not a new one: some counties corporate were appointed separate Lieutenants from the larger county (often the posts would be held jointly), and the three Ridings of Yorkshire had been treated as three counties for Lieutenancy since the 17th century.

The Local Government Act 1888 set up county councils to take over the administrative functions of Quarter Sessions in the counties. It created new entities called "administrative counties" that constituted all the county apart from the county boroughs: also some traditional subdivisions of counties were constituted administrative counties, for instance the Soke of Peterborough in Northamptonshire and the Isle of Ely in Cambridgeshire. The Act further established that areas that were part of an administrative county would be part of the county for all purposes. The largest difference was the existence of the County of London, created both an administrative county and a "county" by the Act, which covered parts of the historic counties of Middlesex, Kent and Surrey. Other differences were small and resulted from the constraint that urban sanitary districts (and later urban districts and municipal boroughs) were not permitted to straddle county boundaries.

The term Ceremonial County for these entities is an anachronism—at the time they were shown on Ordnance Survey maps by the name "counties" or "geographical counties", and were referred to in the Local Government Act 1888 as simply "counties". 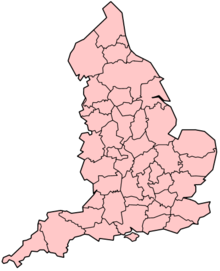 In 1974, administrative counties and county boroughs were abolished, and a major reform took place. At this time, Lieutenancy was redefined to use the new metropolitan and non-metropolitan counties directly.

Following a further rearrangement in 1996, Avon, Cleveland, Hereford and Worcester, and Humberside were abolished. This led to a resurrection of a distinction between the local government counties and the ceremonial or geographical counties used for Lieutenancy, and also to the adoption of the term "ceremonial counties", which although not used in statute was used in the House of Commons prior to the arrangements coming into effect.[2]

Avon was mostly split between Gloucestershire and Somerset, with Bristol regaining its status of a county in itself. Cleveland was partitioned between North Yorkshire and County Durham. Hereford and Worcester was split into Herefordshire and Worcestershire. Humberside was split between Lincolnshire and a new ceremonial county of East Riding of Yorkshire. Also at this time, Rutland was restored as a ceremonial county. Many county boroughs were re-established as "unitary authorities" which involves establishing the area as an administrative county, but usually not as a ceremonial county.

Most ceremonial counties are therefore defined today as groups of local authority areas; the same situation as prevailed between 1889 and 1974. The Association of British Counties, a traditional counties lobbying group, have suggested that the ceremonial counties could be restored to their ancient boundaries, or as near as is practicable.

The Lieutenancies Act 1997 defines counties for the purposes of lieutenancies in terms of local government areas created by the Local Government Act 1972 as amended. Although the term is not used in the Act, those counties are known as "Ceremonial Counties". Schedule 1, paragraphs 2–5[3] as amended[4] (most recently in 2009[5] defines them as: