Sections of the county closer to London are part of the Metropolitan Green Belt, which limits development. It is the location of the nationally important Pinewood Studios and Dorney Lake, which will be holding the rowing events at the 2012 Summer Olympics. It is also well known for the new town of Milton Keynes and the Chiltern Hills area of outstanding natural beauty.

The name Buckinghamshire is Anglo-Saxon in origin and means The district (scire) of Bucca's home. Bucca's home refers to Buckingham in the north of the county, and is named after an Anglo-Saxon landowner. The county has been so named since about the 12th century; however, the county itself has existed since it was a subdivision of the kingdom of Mercia (585–919).

The history of the area, though, predates the Anglo-Saxon period and the county has a rich history starting from the Celtic and Roman periods, though the Anglo-Saxons perhaps had the greatest impact on Buckinghamshire: the geography of the rural county is largely as it was in the Anglo-Saxon period. Later, Buckinghamshire became an important political arena, with King Henry VIII intervening in local politics in the 16th century and just a century later the English Civil War was reputedly started by John Hampden in mid-Bucks.[1]

Historically, the biggest change to the county came in the 19th century, when a combination of cholera and famine hit the rural county, forcing many to migrate to larger towns to find work. Not only did this alter the local economical picture, it meant a lot of land was going cheap at a time when the rich were more mobile and the leafy Bucks became a popular rural idyll: an image it still has today. Buckinghamshire is a popular home for London commuters, leading to greater local affluence; however, some pockets of relative deprivation remain.[2]

The county can be split into two sections geographically. The south leads from the River Thames up the gentle slopes of the Chiltern Hills to the more abrupt slopes on the northern side leading to the Vale of Aylesbury, a large flat expanse of land, which includes the path of the River Great Ouse.

The county includes two of the four longest rivers in England. The River Thames forms the southern boundary with Berkshire, which has crept over the border at Eton and Slough meaning the river is no longer the sole boundary between the two counties. The River Great Ouse begins just outside the county in Northamptonshire and flows east through Buckingham, Milton Keynes and Olney.

The main branch of the Grand Union Canal flows through the county as do its arms to Slough, Aylesbury, Wendover (disused) and Buckingham (disused). The canal has been incorporated into Milton Keynes.

The two highest points in Buckinghamshire are Haddington Hill in Wendover Woods (a stone marks its summit) at 267 metres (876 ft) above sea level, and Coombe Hill near Wendover at 260 metres (850 ft).

Buckinghamshire is split into civil parishes.

At present, the county has two top-level administrations: Buckinghamshire County Council, which administers about four fifths of the county (see map above) and the Borough of Milton Keynes, a unitary authority, which administers the remaining fifth. There are four district councils that are subsidiary to the county council: Aylesbury Vale, Chiltern, South Bucks and Wycombe. 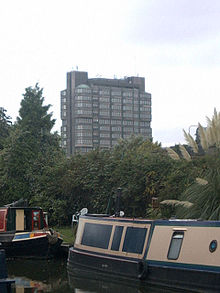 The county council was founded in 1889 with its base in new municipal buildings in Walton Street, Aylesbury (which are still there). In Buckinghamshire, local administration is run on a two-tier system where public services are split between the county council and a series of district councils.

In the 1960s the council moved into new premises: a 15-storey tower block in the centre of Aylesbury (pictured) designed by architect Thomas Pooley. Said to be one of the most unpopular and disliked buildings in Buckinghamshire, it is now a Grade II listed building.

Buckinghamshire County Council is a large employer within the County and provides a great variety of services, including education (schools, adult education and youth services), social services, highways, libraries, County Archives and Record Office, County Museum and Roald Dahl Children's Gallery in Aylesbury, consumer services and some aspects of waste disposal and planning.

The coat of arms of Buckinghamshire County Council features a white swan in chains. This dates back to the Anglo-Saxon period, when swans were bred in Buckinghamshire for the king's pleasure. That the swan is in chains illustrates that the swan is bound to the monarch, an ancient law that still applies to wild swans in the UK today. The arms were first borne at the Battle of Agincourt by the Duke of Buckingham.

The motto of the shield says Vestigia Nulla Retrorsum. This is Latin and means 'no stepping back'.

The traditional flag of Buckinghamshire, which flies outside County Hall in Aylesbury, comprises red and black halves with a white swan. The flag takes the county emblem which is on the county shield.

Buckinghamshire has a modern service-based economy and is part of the Berkshire, Buckinghamshire and Oxfordshire NUTS-2 region, which was the seventh richest subregion in the European Union in 2002.[8] The southern part of the county is a prosperous section of the London commuter belt. The county has fertile agricultural lands, with many landed estates, especially those of the Rothschild banking family of England in the 19th century (see Rothschild properties in England). Manufacturing industries include furniture-making (traditionally centred at High Wycombe), pharmaceuticals and agricultural processing.

This is a chart of trend of regional gross value added of Buckinghamshire at current basic prices published by the Office for National Statistics with figures in millions of British Pounds sterling (except GVA index).[9]

In a recent nationwide survey, Buckinghamshire had the highest quality of life in the country, having the highest life expectancy and best education results.[15]

Buckinghamshire is most notable for its open countryside and natural features, including the Chiltern Hills Area of Outstanding Natural Beauty and the River Thames.[16] The county is also home to a large quantity of historic houses, some of which are open to the public through the National Trust such as Waddesdon Manor, West Wycombe Park and Cliveden[17] and others which still act as private houses such as the Prime Minister's country retreat Chequers.[18]

Buckinghamshire is also famous as the home of various notable people from history in whose honour tourist attractions have been established. The most notable of these is the author Roald Dahl who included many local features and characters in his works.[19][20]

Buckinghamshire (including Milton Keynes) is served by four motorways, although two are on its borders:

Four important A roads also enter the county (from north to south):

Road travel east–west is good in the county because of the commuter routes leaving London for the rest of the country. There are no major roads that run directly between the south and north of the county (e.g. between High Wycombe and Milton Keynes).

Buckinghamshire has four main lines running through it:

There are the following additional lines:

The county once had an extensive network of Metropolitan Railway services, from the current Amersham terminus right into central Bucks at Verney Junction. That station is now closed but may one day re-open as part of the Varsity Line scheme for trains between Oxford and Bedford. 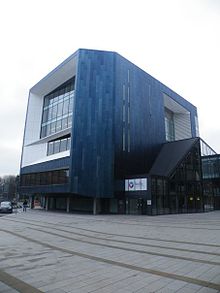 Buckinghamshire has been the birth place and/or final resting place of several notable individuals. Saint Osyth was born in Quarrendon and was buried in Aylesbury in the 7th century[23] while at about the same time Saint Rumwold was buried in Buckingham.[24] From the medieval period Roger of Wendover was, as the name suggests, from Wendover[25] and Anne Boleyn also owned property in the same town.[26] It is said that King Henry VIII made Aylesbury the county town over Buckingham because Boleyn's father owned property there and was a regular visitor himself.[27] Other medieval residents included Edward the Confessor who had a palace at Brill[28] and John Wycliffe who lived in Ludgershall.[29]

From a slightly later period Buckinghamshire became home to some notable literary characters. Edmund Waller was brought up in Beaconsfield and served as Member of Parliament for both Amersham and Wycombe.[30] Percy Bysshe Shelley and his wife Mary spent some time living in Marlow, attracted to the town by their friend Thomas Love Peacock who also lived there.[31] John Milton lived in Chalfont St Giles and his cottage can still be visited there[32] and John Wilkes served as Member of Parliament for Aylesbury.[33] Much later literary characters include Jerome K. Jerome who lived at Marlow,[34] T. S. Eliot who also lived at Marlow,[35] Roald Dahl who lived in Great Missenden,[36] Enid Blyton who lived in Beaconsfield[37] and Edgar Wallace who lived in Bourne End[38] and is buried in Little Marlow.[39] Modern-day writers from Bucks include Terry Pratchett who was born in Beaconsfield,[40] Tim Rice who is from Amersham[41] and Andy Riley who is from Aylesbury.[42]

During the Second World War a number of politicians and world leaders from Europe came to England to seek exile. Due to its proximity to London various locations in Buckinghamshire were selected to house dignitaries. President Edvard Beneš of Czechoslovakia lived at Aston Abbotts with his family while some of his officials were stationed at nearby Addington and Wingrave.[43] Meanwhile Władysław Sikorski, military leader of Poland, lived at Iver[44] and King Zog of Albania lived at Frieth.[45] Bucks is also notable for another exile, although this one much earlier: King Louis XVIII of France lived in exile at Hartwell House from 1809 to 1814.[46]

Also on the local political stage Buckinghamshire has been home to Nancy Astor who lived in Cliveden,[47] Frederick, Prince of Wales who also lived in Cliveden,[48] Baron Carrington who lives in Bledlow,[49] Benjamin Disraeli who lived at Hughenden Manor and was made Earl of Beaconsfield,[50] John Hampden who was from Great Hampden and is revered in Aylesbury to this day[1] and Prime Minister Archibald Primrose, 5th Earl of Rosebery who lived at Mentmore.[51] Also worthy of note are William Penn who believed he was descended from the Penn family of Penn and so is buried nearby[52] and the current Prime Minister of the United Kingdom, who has an official residence at Chequers. Finally John Archdale colonial governor of North Carolina and South Carolina, although more notably American, was born in Buckinghamshire.[53]

Other natives of Buckinghamshire who have become notable in their own right include:

Today Buckinghamshire is a very picturesque landscape and is home to numerous celebrities and has attracted its fair share in the past. These include: