Buckingham is a town situated in north Buckinghamshire, England, close to the borders of Northamptonshire and Oxfordshire. The town has a population of 11,572 (United Kingdom Census 2001), (2007 est. 13,200). Buckingham is also a civil parish designated as a town council.

Buckingham has a variety of restaurants and pubs, typical of a small market town. It has a small number of local shops, both national and independent. Market days are Tuesday and Saturday which take over Market Hill and the High Street cattle pens. Buckingham is twinned with Mouvaux, France.

Old County Gaol in Buckingham, built 1748. It is now The Old Gaol Museum.

In the 7th century, Buckingham, literally "meadow of Bucca's people"[4] is said to have been founded by Bucca, the leader of the first Anglo Saxon settlers.[4] The first settlement was located around the top of a loop in the River Great Ouse, presently the Hunter Street campus of the University of Buckingham. Between the 7th century and the 11th century, the town of Buckingham regularly changed hands between the Saxons and the Danes, in particular, in 914 King Edward the Elder and a Saxon army encamped in Buckingham for four weeks forcing local Danish Viking leaders to surrender.[4] Subsequently a fort was constructed at the location of the present Buckingham parish church.[4]

Buckingham is the first settlement referred to in the Buckinghamshire section of the Domesday Book of 1086.[5] Buckingham was referred to as Buckingham with Bourton, and the survey makes reference to 26 burgesses, 11 smallholders and 1 mill.

The town received its charter in 1554 when Queen Mary created the free borough of Buckingham with boundaries extending from Thornborowe Bridge (now Thornborough) to Dudley Bridge and from Chackmore Bridge to Padbury Mill Bridge. The designated borough included a bailiff, twelve principal burgesses and a steward.[6]

The town suffered from a significant fire that raged through the town centre on 15 March 1725,[7] with the result that many of the main streets of the town were destroyed including Castle Street, Castle Hill and the north side of Market Hill. The result was 138 dwellings (out of a total of 387 in the town at that time) being consumed in the fire. The current fine range of Georgian architecture in these streets today is as a direct result of that fire, but the immediate aftermath was difficult for the town. Collections were made in surrounding towns such as Aylesbury and Wendover to help those made homeless and by 1730, only a third of the homes had been rebuilt.

The town is centred on the historic market place and contains many 18th century buildings. There are three main roads crossing Buckingham, namely the A413, the A421 (the southern bypass) and the A422. Capability Brown's historic formal garden design at Stowe (on the A422 westbound) is an important attraction in the care of the National Trust.

There is a medieval well known as St Rumbold's Well on the south side of the dismantled railway which borders the town. The well, which is now dry for much of the year, was positioned to exploit the spring line below the crest of a north facing slope overlooking the town.

Suburbs of Buckingham include Mount Pleasant, Page Hill, Bourton, Badgers, Linden Village, and Castle Fields. Maids Moreton, (a village on the north eastern borders of the town, has become contiguous with the Buckingham urban area. Nearby towns include Aylesbury, Winslow, Bicester, Brackley, Milton Keynes and Towcester. Local villages in the immediate vicinity include Padbury and Gawcott to the south, Chackmore to the north and Shalstone to the north west. It is also very near Stowe, the location of Stowe House, Stowe Landscape Gardens and Stowe School.

Bourton was a hamlet in the parish of Buckingham. The hamlet name is Anglo Saxon in origin, and means 'fortified enclosure'. It is now an integral part of the town of Buckingham, with a road and old mill named Bourton still visible to visitors.

Bourton was once the location of a great house that belonged to the Minshull family. In the English Civil War the house was plundered by Parliamentarian forces and goods to the value of £2,000 (a massive fortune in the day) were stolen.[citation needed] The house has long since disappeared.

The town is home to one of the UK's two private universities, the University of Buckingham. Unlike other UK universities, most of its students are from overseas.

The town is home to a number of industrial estates and technology parks housing high tech companies in the pharmaceutical, electronic, foods and composite materials fields including Natco, Racelogic, Superchips, Vitalograph and Wipac.

Buckingham is linked to Aylesbury by the 60 and Milton Keynes by the 32. An inter-city coach service known as the X5 links the town to Oxford and Cambridge. Some surrounding villages are connected to Buckingham by a market day bus.

Buckingham was served by the Buckingham Arm of the Grand Junction Canal from 1801 to 1932, and the canal was finally abandoned in 1964. The canal ran from Cosgrove, Northamptonshire to the centre of Buckingham to a wharf.

Buckingham had a railway station on the Banbury to Verney Junction Branch Line and ran from 1850 to 1964.

Buckingham was home to the Thomas Rickett steam car, an innovative vehicle from 1860, though considered ahead of its time and only two are considered to have been made. 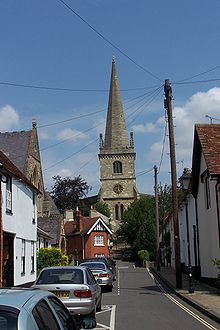 SS Peter and Paul, Buckingham viewed from the south west.

The town is said to be the final resting place of St Rumbold (also known as Saint Rumwold), a little known Saxon saint and the grandson of Penda King of Mercia; the parish church at Strixton (Northamptonshire) is dedicated to him and the small northern town of Romaldkirk is also thought to be named after him. He was apparently born at King's Sutton, Northants, where he died just three days later. During his short life, he repeatedly professed his Christian faith and asked for baptism. He is now most often referred to as St Rumbold,[8] the latter being the most common, as it can be found being used on a local road name and recent booklets about the subject.