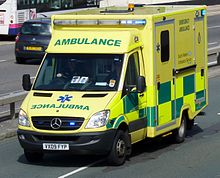 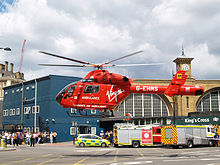 The London Air Ambulance in action

Role of the ambulance services 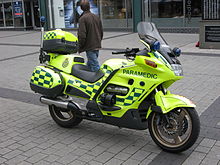 A paramedic's motorcycle in Birmingham

Public ambulance services across the UK are required by law to respond to four types of requests for care,[1] which are:

Ambulance trusts and services may also undertake non-urgent patient transport services on a commercial arrangement with their local hospital trusts or health boards, or in some cases on directly funded government contracts.[2] This is an area where an increasing amount of private firms are taking business away from the trusts.

Emergency ambulance work in all NHS bodies and most voluntary and private firms is based on the guidance published by the Joint Royal Colleges of medicine Ambulance Liaison Committee (JRCALC).[citation needed]

In England there are twelve ambulance 'Trusts', with boundaries generally following those of the regional government offices.[3]

The ambulance services across England have been increasingly busy, with a significant increase in calls in the last two decades,[3] as shown in the table below:

Following consultation, on 1 July 2006, the number of ambulance trusts fell from 29 to 13.[3] The reduction can be seen as part of a trend dating back to 1974, when local authorities ceased to be providers of ambulance services. This round of reductions in the number of trusts originated in the June 2005 report "Taking healthcare to the Patient", authored by Peter Bradley, Chief Executive of the London Ambulance Service, for the Department of Health.[5]

Most of the new Trusts follow government office regional boundaries, exceptions to this are the Isle of Wight (where provision will remain with the Island's Primary Care Trust), and South East and South West England which are both split into two Trusts. This has led to a number of old trusts ceasing to exist. Staffordshire ambulance trust had a temporary reprieve, but became part of the West Midlands ambulance trust on 1 October 2007. The new Trust structure is as follows:

Crest of the Scottish Ambulance Service 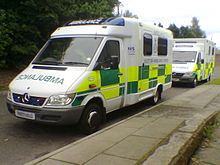 The Scottish Ambulance Service is a Special Health Board funded directly by the Health Department of the Scottish Government.[7] Until 1974, ambulance cover in Scotland was originally provided by a combination of the British Red Cross and St Andrews Ambulance.[8] In financial year 2008–2009, the service employed 3,797 staff across five divisions and attended to 599,052 accident and emergency incidents.

Complementing and working alongside the Scottish Ambulance Service is the Emergency Medical Retrieval Service.[9] This unique airborne medical initiative is based at Glasgow City Heliport and, staffed by consultants, uses various air assets to provide patients in remote and rural areas with rapid access to the skills of a consultant in emergency or intensive care medicine as well as facilitating transfers to larger, better equipped city hospitals. The team respond to calls 24 hours a day, utilising both helicopters and fixed-wing aircraft.

The national headquarters of the Scottish Ambulance Service are in Edinburgh and there are five divisions within the Service, namely:

The Northern Ireland Ambulance Service (NIAS) is the ambulance service that serves the whole of Northern Ireland, and was established in 1995 by parliamentary order.[16] As with other ambulance services in the United Kingdom, it does not charge its patients directly for its services, but instead receives funding through general taxation. It responds to medical emergencies in Northern Ireland with the 270 plus ambulances at its disposal. The Service employs approximately 1,044 staff based across 32 stations & sub-stations, four Control Centres and a Regional Training Centre.[16]

Its headquarters is located at H.M.Stanley Hospital, St Asaph, Denbighshire and it is divided into three regions:[18]

Uniquely in the UK, The Welsh Ambulance Services NHS Trust is also responsible for the provision of NHS Direct, a nurse led telephone healthcare service which is provided by a separate Trust in England and by NHS 24 in Scotland.

The performance of every Ambulance Trust is measured by the government. Commonly called 'ORCON',[19] after the consultancy used to formulate them, they are more properly called NAPS - New Ambulance Performance Standards. The Government's targets are to reach 75% of Category A (life-threatening) calls - as decided by the computerised AMPDS (except the Berkshire Division of South Central Ambulance where CBD (Criterion Based Dispatch) is used) - within eight minutes. A number of initiatives have been introduced to assist meeting these targets, including Rapid Response Vehicles and Community First Responders.[citation needed] The target in Wales is set by the Welsh Assembly Government (WAG). Currently the WAG requires 65% of category A calls to be reached within 8 minutes.

The performance of the Ambulance service is measured by the government, as part of a system called 'ORCON'.[20] The Government's target is to reach 75% of Category A (life threatening) calls within eight minutes, as recorded by the computerised AMPDS. A number of initiatives have been introduced to assist meeting these targets, including Rapid Response Vehicles and Community First Responders.

The Scottish Ambulance Service was criticised in a case where a technician attended a call out within four minutes — well within the eight minute target — but not a paramedic who alone could administer certain cardiac drugs.[21]

Private ambulance services are becoming more common in the UK,[22] performing a number of roles, including providing medical cover at large events, either alongside, or instead of the voluntary sector providers. Some organisers use a private firm instead of a voluntary ambulance service because of wider availability during the week (sometimes difficult for a voluntary service to cover) or for a wider range of skills, such as provision of qualified paramedics.[citation needed]

The most common type of private ambulance provider is in the patient transport role, with many trusts and hospitals choosing to outsource this function to a private company, rather than use the NHS service, although the policy differs from trust to trust.

Some companies have been contracted to provide additional emergency crews and vehicles to supplement the core NHS staff at busy times, with a quarter of the UK ambulance trusts contracting private companies to front line work.[23] 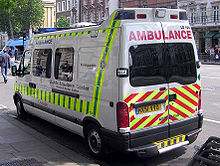 The main voluntary ambulance providers are the British Red Cross and St. John Ambulance, which have been providing emergency medical cover in the UK for many years, including active service in both World Wars (pre-dating the existence of any government organised service), and along with St Andrews Ambulance (now St Andrews First Aid, which no longer provides an ambulance service) ran statutory ambulance services in the United Kingdom under contract to the government until a reorganisation in 1974.[8] The primary activity of both organisations in relation to ambulances, is the provision of covers at events as an extension of their first aid contract.

Depending on their agreement/s with their local ambulance service trust (known as a "Memorandum of Understanding" or MOU), they may treat and transport certain categories of patient to hospital, although for more serious incidents, such as cardiac arrest it is likely that they would be expected to summon the assistance of the statutory ambulance service.[citation needed]

Both organisations also provide "reserve" or "support" cover to some, though not all, of the ambulance trusts , dependent on the local MOU, where ambulance crews from one of the organisations (who are usually volunteers, but in some instances may be paid staff) will attend 999, GP Urgent or PTS calls on behalf of the ambulance trust, with the organisation receiving recompense from the trust. This service is most often called on during major incidents (e.g. the 7 July 2005 London bombings), when there is a high level of staff absence or when there is an unusually high call volume, although in some areas, voluntary crews are regularly used to supplement full time trust cover.

Both organisations have also provided cover for the public on the very rare occasions when unionised NHS ambulance trust staff have taken industrial action.[24] 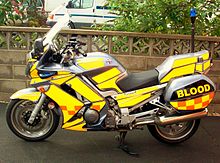 The British Association for Immediate Care coordinates voluntary schemes, and individual medical and allied health professionals, providing immediate care throughout the UK.[25] BASICS doctors, for example, may assist ambulance paramedics at the scenes of serious road accident or be on-hand at major sporting events.

There is a network of charities, mainly in various Counties of England, which provide voluntary motorcycle couriers for the National Blood Service and hospitals.[26] An example is the Freewheelers EVS operating in Somerset and surrounding counties. They carry blue lights and sirens which can be used when transporting blood or human tissue for transplant. The first operational service of this kind in Scotland is likely to be provided in the Greater Glasgow & Clyde NHS region by Scottish Emergency Rider Volunteer Service or ScotsERVS towards the end of 2011.<[27]