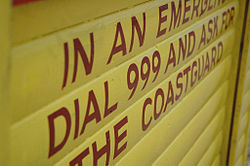 A sign on a beach in Whitstable, United Kingdom, advising readers to dial 999 in the event of an emergency

999 is an official emergency telephone number in a number of countries which allows the caller to contact emergency services for urgent assistance.

999 or 112 can be used to summon assistance from the three main emergency services, the police, fire brigade and ambulance, or more specialist services such as the Coastguard and, in relevant areas, mountain and cave rescue. Calls to 112 or 999 are free. Calls to the European Union and GSM standard emergency number 112 are automatically routed to 999 operators.

First introduced in the London area on 30 June 1937, the UK's 999 number is the world's oldest emergency call service. The system is said to have been introduced following a fire on 10 November 1935 in a house on Wimpole Street in which five women were killed.[1] A neighbour had tried to telephone the fire brigade and was so outraged at being held in a queue by the Welbeck telephone exchange that he wrote a letter to the editor of The Times,[2] which prompted a government inquiry.[1]

The 9-9-9 format was chosen based on the 'button A' and 'button B' design of pre-payment coin-operated public payphones in wide use (first introduced in 1925) which could be easily modified to allow free use of the 9 digit on the rotary dial, without allowing free use of any other number combination.

The choice of 999 was because in the dark or in dense smoke, 999 could be dialled by placing a finger against the dial stop and rotating the dial to the full extent three times. This enables all users including the visually impaired to easily dial the emergency number. It is also the case that it is relatively easy for 111, and other low-number sequences, to be dialled accidentally, including when transmission wires making momentary contact produce a pulse similar to dialling (e.g. when overhead cables touch in high winds).[3][4]

With the introduction of mobile telephones, accidental or "silent" 999 calls have become an increasing problem. Hoax calls and improper use are also an issue. For these reasons, there are frequent public information campaigns in the UK on the correct use of the 999 system.

Alternative three-digit numbers for non-emergency calls have also been introduced in recent years. 101 is used for non-urgent calls.[5] Meanwhile, trials of 111 as a number to access health services in the UK for urgent but not life-threatening cases began in 2010.

In 2008-2009, Nottinghamshire Police ran a successful pilot of Pegasus, a database containing the details of people with physical and learning disabilities or mental health problems, who have registered with the force because their disabilities make it difficult for them to give spoken details when calling the police. Those registered on the database are issued with a personal identification number (PIN) that can be used in two ways. By phone - either 999, 112 or the force's non-emergency 0300 300 9999 number can be used - once a person is put through to the control room, they only need to say "Pegasus" and their PIN. Their details can then be retrieved from the database and the caller can quickly explain why they have called. In person the Pegasus PIN can be told or shown to a police officer. In January 2011, City of London Police made Pegasus available for non-emergency calls.

Since the introduction of mobile phones, the choice of the number 999 has become a particular problem for UK emergency services,[6] as same-digit sequences are most likely dialled by accident due to vibrations and other objects colliding with a keypad. This problem is less of a concern with emergency numbers that use two different digits, such as 112 and 911.

The pan-European 112 code was introduced in the UK by BT in December 1992,[citation needed] with little publicity. It connects to existing 999 circuits. The GSM standard mandates that the user of a GSM phone can dial 112 without unlocking the keypad, a feature that can save time in emergencies but that also causes some accidental calls. A valid SIM card is required to make a 999/112 emergency call in the UK.[7][8]

It has been reported that some mobile phone handsets sold in the UK and Ireland may connect calls dialled as 9-1-1 to the GSM standard emergency number 112. It is also possible that 9-1-1 may be mapped inappropriately to emergency services in some VoIP equipment or private networks. However, the digits 911 could form the start of a normal local number in Ireland or the United Kingdom, so the code is not supported by the public telephone networks. This is simply a quirk of programming. 911 is not the official number and cannot be relied upon in case of emergency.[9]

999 or 112 is used to contact the emergency services upon witnessing or being involved in an emergency. In the United Kingdom, the numbers 999 and 112 both connect to the same service, and there is no priority or charge for either of them.

An emergency can be:

On dialling 999 or 112 an operator at BT, Cable & Wireless or Global Crossing will answer and ask, "Emergency. Which service?"[citation needed] Previously operators asked "Which service do you require?" (approximately up to the mid-90s). If the caller is unsure as to which service they require, the operator will default the call to the police, and if an incident requires more than one service, for instance a road traffic collision with injuries and trapped people, depending on the service the caller has chosen, the service will alert the other services for the caller (while the operator has to also contact each emergency service individually, regardless of whether the caller has remained on the line). The caller will be connected to the service which covers the area that they are (or appear to be) calling from.

On 6 October 1998, BT introduced a new system whereby all the information about the location of the calling telephone was transmitted electronically to the relevant service rather than having to read it out (with the possibility of errors). This system is called EISEC (Enhanced Information Service for Emergency Calls). Previously, the operator had to start the connection to the emergency service control room by stating the location of the operator, followed by the caller's telephone number, e.g. "Bangor connecting 01248 300 000". It was common for the person calling to be confused as to why the operator was talking to the emergency service, and the caller frequently talked over the operator. Only around 50% of the emergency authorities have EISEC, although the number is ever increasing, so, in those cases without EISEC present, the operator still has to pass their location and the caller's number.

The rooms in which operators work are called operator assistance centres (OACs). In Wales they are located in Newport and Bangor. 999/112 calls from mobile telephones are usually answered in an OAC in Inverness, Scotland, or Blackburn, England. Cable & Wireless Operator Services are based in Glasgow and Birmingham. C&W primarily handle 999 calls for Virgin Media and T Mobile.

In some situations there may be specific instructions on nearby signs to notify some other authority of an emergency before calling 999. For example, bridges carrying railways over roads may carry signs advising that if a road vehicle strikes the bridge the railway authority (on a given number) should be called first, then 999.

Access to the 999/112 service is provided for the hearing-impaired via Textphone and use of the RNID "Typetalk" relay service. The number is 18000.

It is important for the caller to be aware of their location when phoning for the emergency services; the caller's location will not be passed onto the emergency services immediately, and finding the location require a combination of efforts from both parties. However it is possible to trace both landline and mobile telephone numbers with the BT operator; the former can be traced to an address. The latter can be immediately traced to a grid reference according to the transmitter being used, however this is only accurate to a certain wide area — for more specific traces senior authority must be acquired and an expensive operation can be conducted to trace the mobile phone to within a few metres.

On some occasions callers will be put through to the wrong area service - this is called a "misrouted 9". The most common reason for this is when a mobile phone calls 999 and is using a radio transmitter that is located in another force; most frequently these are calls that are made within a few miles of a border. Upon establishing the incident location, the emergency service operator will relay the information to the responsible force for their dispatch. In most areas, other forces will respond to incidents just within the border if they could get there quicker, assist, and then hand over to the other force when they arrive.

The most common reasons for abandoned calls include:

In Saudi Arabia, 999 is the emergency number for the police only; 998 is for the fire brigade, 997 for ambulance, 996 for traffic police, and 995 is for the General Department of Narcotics Control.

In Bangladesh, 999 is the emergency number for Dhaka Metropolitan Police, while Fire Service is 199.

999 was introduced to Hong Kong during British rule and continues to be used following the transfer of sovereignty.

The worldwide emergency number for GSM mobile phones, 112, also works on all GSM networks in the country. Calls made to this number are redirected to the 999 call centre.

The 999 emergency services in Malaysia is staffed by about 138 telephonists from Telekom Malaysia. Ongoing upgrading works are taking place to introduce the Computer-Telephony Integration (CTI) for hospital exchanges, digital mapping to track the callers' locations and Computer Assisted Despatching (CAD) for online connectivity among the agencies providing the emergency services in the country. All calls to the number are made free of charge.

The worldwide emergency number for GSM mobile phones, 112, also works on all GSM networks in the country. Calls made to this number are redirected to the 999 call centre.

The 112 emergency number is an all-service number in Poland like in other EU states, but old numbers that were traditionally designated for emergencies are still in use parallel to 112. Those are 999 for ambulance, 998 for fire brigade and 997 for police.

In the United Arab Emirates the 999 service is used to contact the police who are also capable of forwarding the call as appropriate to the ambulance or fire services. The number 998 connects directly to the ambulance service and 997 to the fire brigade.

In Singapore, the number 999 was inherited from British rule and continued after independence. The number 995 was later additionally established in 1984 for direct lines to the fire brigade and ambulance services of the Singapore Civil Defence Force.

In Trinidad and Tobago, 999 is used to contact the police only. The number 811 is used for the ambulance service and 990 for the fire brigade.