North East Lincolnshire was created from the boroughs of Cleethorpes and Great Grimsby on 1 April 1996 on the abolition of Humberside.

Historically, it was part of the Kingdom of Lindsey.

The north part of the authority has a flat landscape. 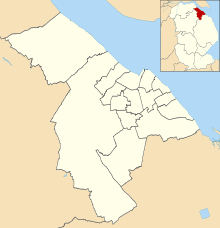 Ward map of the council 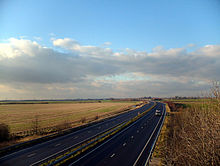 The A180 near Immingham, an important road for the authority 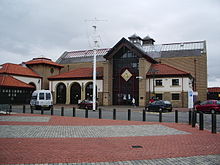 North East Lincolnshire is a unitary authority that operates a cabinet-style council since 2003. There are 42 councillors. They elect the cabinet in May each year. Each cabinet member is responsible for making decisions within their portfolio area.[2] The governance of North East Lincolnshire council has come under scrutiny from the audit commission on two occasions[3] leading to special public interest reports for there failings.

It been declared the worst Council in the country.[4] It is currently run politically on agreement between the Conservatives and Liberal Democrats and has been since 2004.[5]

North East Lincolnshire council was also the council subject to the Kelly report for Ian Huntley involvement and the Soham murders.

The radio station for the area is called Compass FM, and takes its logo from the logo of North East Lincolnshire, being based south of Grimsby railway station. BBC Radio Humberside have a small studio to the east of Grimsby town centre. Grimsby Institute have the innovative Seven (former Channel 7) television, based in Immingham at the Immage Studios. Propeller TV was also part of Grimsby Institute. The Grimsby Telegraph is a daily newspaper.

The North East Lincolnshire towns of Grimsby, Immingham and Cleethorpes, form the economic area known as Greater Grimsby.[6] The main sectors of the Greater Grimsby economy are food and drink; ports and logistics; renewable energy; chemicals and process industries and digital media.

This is a chart of trend of regional gross value added of North and North East Lincolnshire at current basic prices published (pp. 240–253) by Office for National Statistics with figures in millions of British Pounds Sterling.

The area has one power station, the South Humber Bank Power Station, which is owned and operated by Centrica sited at Stallingborough.

Similar to North Lincolnshire, the area has its fire and police run by Humberside Fire and Rescue Service and Humberside Police.

There are two main roads that link to the unitary authority - the A180 (from the M180) which was built in 1984, and the A46 from Lincoln. The A46 terminates in Cleethorpes, previously terminating at the Laceby roundabout, and follows the former route of the A18 through Grimsby and Cleethorpes.

There are good connections by railway from Doncaster and Sheffield, which start at Manchester Airport - the Transpennine Express.

It is transport by sea that the area has national significance. The two ports of Immingham and Grimsby, when combined, have the largest tonnage of freight of any UK port. Immingham has many DFDS freight routes (DFDS Seaways since 2010, the former DFDS Tor Line) to Europe.

The local LEA has comprehensive schools, becoming comprehensive in the early 1970s when part of the County Borough of Grimsby, and the Lindsey Education Committee, based in Lincoln. However, due to the proximity of West and East Lindsey which have grammar schools, some children capable of passing the eleven-plus are bussed over the border to places like Caistor, a short journey along the A46. Previous to this Cleethorpes had girls' and boys' grammar schools, and Grimsby had the girls' and boys' (which joined in the late 1960s) Wintringham grammar schools.

The local secondary schools have improved in recent years, but Grimsby still has some of the worst GCSE results in the country. There is a clear cut dichotomy of education up to 16, with schools on the edge of Grimsby and Cleethorpes performing with respectable results, leaving the centre of these towns with struggling schools that have faced closure. Most schools have converted to Academy status, with some also lucky enough to move into brand new spacious buildings. It is more the case that affluent parents would refuse to send their children to schools in central Grimsby, hence the schools on the outer edge do much better.

Once the age of 16 is reached, then the LEA is able to confidently stand on its own two feet and compete with the best. The Franklin College has a good reputation at A level, and regularly produces the best A level results for state schools in the former area of Humberside (north and south). It was formed by the (Conservative-controlled) Humberside Education Committee, based in Beverly. Sixth formers travelled from East and West Lindsey to attend this college, such was its reputation.

The main FE college in Grimsby is the Grimsby Institute. This offers a wide range of vocational courses and has links with the fishing industry. It offers higher education courses, and has done for many years - HNDs, for vocational subjects. It has the long-term ambition to become a university. The University of Humberside used to have its food science campus at the college, but removed this when it became the University of Lincoln. 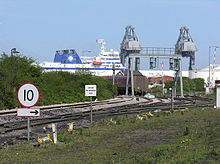