The Kingdom of Denmark consists of three constituent parts, each part sometimes referred to as a country:

However, this terminology is not consistent. The Faroes are also referred to as a "self-governing territory" or similar by (e.g.) the Prime Minister of the Faroe Islands[3] and the Royal Danish Ministry of Foreign Affairs.[4] Similarly, the Danish Government also refers to Greenland as an "autonomous province"[5] and neither of the laws forming Greenland's constitution refer to Greenland as a country.[6]

In 2004, the French overseas collectivity of French Polynesia was legally designated as a pays d'outre-mer au sein de la République.[7] Although some translated this as an "overseas country inside the Republic",[8] the Constitutional Council of France ruled that this was merely a change of appellation and did not represent an unconstitutional change in legal status.[9]

The states of Germany and of Austria are referred to as Bundesländer ("Federal Lands") and Gliedstaaten ("Member States") in German, a usage implying their former sovereignty in a manner parallel to the American use of "states" (German: Bundesstaaten and Gliedstaaten). However, they are never considered countries in their own right and are referred to as Bundesländer or terms such as "states" in other languages to avoid confusion.

Main article: Kingdom of the Netherlands

As of 10 October 2010, the Kingdom of the Netherlands consists of four countries:[10]

Each is expressly designated as a land in Dutch law by the Charter for the Kingdom of the Netherlands.[11] Unlike the German and Austrian bundesländer, landen is consistently translated as "countries" by the Dutch government.[12][13][14]

The Realm of New Zealand consists of three parts usually referred to as countries:

However, the Constitutions of the Cook Islands[18] and of Niue[19] do not describe either as a country, nor do the New Zealand Acts which brought those constitutions into force.[20][21] 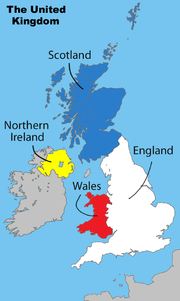 However, the kingdom itself is a unitary one and not a personal union: properly speaking, the principality of Wales ceased to exist in 1542, the kingdoms of England and Scotland in 1707, and the kingdom of Ireland in 1800 or 1953.[26] Further, the current usage "country" does not always appear in the acts of union which established the modern nation and can therefore be particularly controversial when applied to Northern Ireland, which did not exist prior to 1921 (See: Countries of the United Kingdom).

Northern Ireland had a devolved parliament from 1921 – 1973 and an assembly from 1973 – 1974 and from 1982 – 1986. After referenda in Wales and Scotland in 1997, new devolved governments were created in Scotland, Wales, and Northern Ireland[27] but not England, which remains directly under Parliament.

At sporting events such as rugby union, the alternate title Home Nations is used. In such contexts, "Ireland" may refer to the team of the entire island as a whole.