The current metropolitan boroughs were created in 1974 as subdivisions of the new metropolitan counties which were created to cover the six largest urban areas in England outside Greater London. The new districts replaced the previous system of county boroughs, municipal boroughs, urban and rural districts. The districts typically have populations of 174,000 to 1.1 million.

The 36 metropolitan boroughs are: 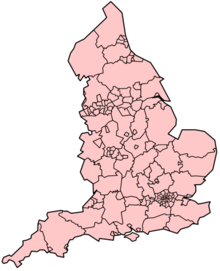