The Metropolitan Borough of Bury is a metropolitan borough of Greater Manchester, in North West England. Lying to the north of the City of Manchester, the borough is composed of six towns: Bury, Ramsbottom, Tottington, Radcliffe, Whitefield and Prestwich, and has a population of 181,900. On the north side Bury bounds the Lancashire districts of Rossendale and Blackburn with Darwen.

The Metropolitan Borough of Bury, which covers 24,511 acres (99 km2), was created on 1 April 1974, with the transfer of functions from the county borough of Bury and the boroughs of Prestwich and Radcliffe, along with the urban districts of Tottington and Whitefield, and part of the urban district of Ramsbottom. All were previously in Lancashire.

Prior to its creation, it was suggested that the metropolitan borough be named Bury Magna, but this was rejected in favour of Bury.[2]

In 2006, facing a budget shortfall of over £10 million, Bury Metropolitan Council decided to sell its painting by L. S. Lowry called "A Riverbank". The work, which depicts the River Irwell and cost £175 in 1951, was expected to fetch between £500,000 and £800,000.[3] Between the announcement and the sale at Christie's, the council was accused of "selling off the family silver". The authority, which had the painting on display at Bury Art Museum, said it was putting its people before a picture.[3] The painting raised £1.25 million for the authority on 17 November 2006 at the auction in London, costing the bidder £1,408,000 including commission.[3] Consequently the council was deregistered by the Museums, Libraries and Archives Council.[4]

In 2004 the Electoral Commission reviewed the electoral arrangements for Bury and The Borough of Bury (Electoral Changes) Order 2004 came into force on the day of the election of councillors in 2004. The order provided for the creation of 17 new wards. These are:-

These 17 wards are each represented by 3 councillors to form a council of 51 members. The Bury electorate figures based on the 2006 forecast are:

Average number of electors for councillor - 2,759

In July 2008 the Borough was the first in Greater Manchester to hold a referendum on whether to install a directly-elected mayor.[6] This was a result of a campaign against congestion charge plans that raised a petition with 9,460 names, well above the required five per cent of voters needed to trigger a mayoral vote.[7] The proposal to have an elected Mayor was rejected.[8]

Showing former status (prior to 1974)

The entirety of the borough is unparished.

The Coat of Arms contains symbols from the six constituent towns with the design based on the old Bury County Borough arms. The shield is divided, with interweaving alluding to the textile industry, diagonally. On the shield a bee represents industry and papyrus papermaking, from Bury, with a ram's head and bullock's head from Ramsbotton and Tottington respectively. The silver colour represents Whitefield whilst the shield is supported with figures from the crests of Radcliffe and Prestwich. These represent the Radcliffe and Egerton families and wear a red rose, for Lancashire, and a cogwheel for industry. The motto 'Forward in Unity' sits on a scroll under the shield.

When the Census was taken there were 74,335 households in Bury with an average of 2.4 persons in each one. In more detail, 39.4% of households were married couples living together, 28.9% were one-person households, 8.7% were co-habiting couples and 10.7% were lone parents.[11] Of all the households 75.11% lived in houses they owned, with or without a mortgage, significanlty higher than the national average of 68.07%.[12]

5.8% of Bury’s residents were born outside the United Kingdom, significantly lower than the national average of 9.2%.[15] The largest minority group was recorded as Asian, at 4% of the population.[16]

The table below details the population change since 1801, including the percentage change since the last available census data. Although the Metropolitan Borough of Bury has only existed 1974, figures have been generated by combining data from the towns, villages, and civil parishes that would later be constituent parts of the borough.

The Audit Commission[20] reported in 2006 that Bury Council continues to make good and sustained progress in improving services for local people. Overall the council was awarded 'three star' status, similar to 47% of all local authorities.

The council was said to be improving well in children's services, particularly in social care. The Audit Commission also noted that resident satisfaction was rising, reflecting improvements in the quality of the environment and services generally. Ten parks have achieved green flag status with recycling levels above average and street cleanliness improving. The council is on target to reach its Decent Homes target by 2010.

The assessment concluded that the council has improved the way it uses its resources to deliver its plans, improving how it manages its finances and service performance and strengthening arrangements to make sure that it achieves good value for money.

There are around 63 primary schools, 14 secondary schools, and three special schools in the Metropolitan Borough of Bury.[21] Overall, Bury was ranked 23rd out of the all the Local Education Authorities in SATs performance and 3rd in Greater Manchester in 2006.[22] In 2007, the Bury LEA was ranked 45th out of 148 in the country – and 3rd in Greater Manchester – based on the percentage of pupils attaining at least 5 A*-C grades at GCSE including Maths and English (47.8% compared with the national average of 45.8%).[23] The schools of the area compete annually in the Bury Schools Athletics Championships.

The LEA High schools in the Borough are:

In addition there are a number of independent high schools:-

There are two FE colleges 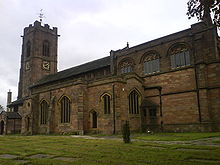 As of the 2001 UK census, 73.6% of people in Bury stated they were Christian with 4.94% following the Jewish and 3.74% following the Muslim faiths.[25] The Jewish community in Prestwich and Whitefield is one of the largest in the country.[26] Bury is covered by the Roman Catholic Diocese of Salford,[27] and the Anglican Diocese of Manchester.[28]

The original Jewish immigrant community in Manchester was based in the inner city. As in other cities the community gradually moved outward geographically and upward economically from its roots establishing itself in the more leafy suburbs of Prestwich, Crumpsall and Broughton Park. Later a second migration of young families in the mid-1960s sought pastures even further away from these traditional areas settling in Whitefield, Sunnybank and Unsworth.[35] There are now about 10 synagogues in the Borough.[36]