Mossley is a small town and civil parish within the Metropolitan Borough of Tameside, in Greater Manchester, England.[1] The town is located in the upper section of the Tame valley in the foothills of the Pennines, 3 miles (4.8 km) northeast of Ashton-under-Lyne and 8.9 miles (14.3 km) east of Manchester.

Mossley has the distinction of being situated at the conjunction of the historic county boundaries of Lancashire, Cheshire and the West Riding of Yorkshire. Local warding and ecclesiastic matters are maintained in Mossley according to these boundaries. At the 2001 census Mossley had a population of 9,856.[2] It is the only parished area of Tameside, having had a parish council since 1999. According to the 1991 census the town was part of the Greater Manchester Urban Area however in the 2001 census it was no longer considered part of that urban area. [3]

Believed to originate in around 1319, the name Mossley means "a woodland clearing by a swamp or bog".[4]

George Lawton, the son of magistrate and alderman John Lawton, inherited a family fortune and, when he died in August 1949, he left his entire estate (apart from some legacies) to the people of Mossley. Part of his estimated £40,000 estate was left to build a public meeting place, the George Lawton Hall, which is a testament to his generosity.

Under the provisions of the Local Government and Rating Act 1997 local electors were given the right to request that a new parish and council be created in unparished areas. The people of Mossley exercised this right and a civil parish for Mossley was established in 1999. The civil parish council voted to adopt town status and Mossley now has a town mayor. The town has three parish wards based on the historic county borders, with four members representing the Cheshire part, three members the Lancashire part and two members the Yorkshire part. The town's unofficial Coat of Arms includes Cheshire's sheaf of corn, Lancashire's red rose and Yorkshire's white rose to signify the historic demarcation.

From 1918 to 1950 the town gave its name to the Mossley constituency which returned a Member of Parliament; for most of the period, the MP was Austin Hopkinson, who was notable for being elected as an Independent candidate. The town is now represented by the MP for Stalybridge and Hyde. Mossley Town Council is represented by five Independent local Councillors and four local Labour Councillors. 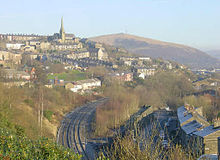 A view of Mossley from near Mossley railway station.

Mossley's proximity to the Saddleworth Moor and the Pennines makes it prone to precipitation.[citation needed]

Mossley lies amongst the foothills of the Pennines, on the western edge of Saddleworth Moor.

The eccesiastical parishes correspond to the boundaries of the historic counties:

Mossley's French twin town is Hem, situated near Lille, in the Nord département.

Mossley's Town Council passed a resolution in November 2009 to make Mossley a Fairtrade Town. A group of local campaigners and activist have started the Fairtrade Mossley group to make 2010 the year that Mossley becomes a Fairtrade Town.[8]