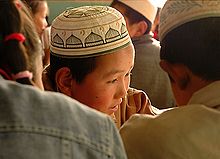 A Muslim, (Arabic: مسلم‎) also spelled Moslem,[1] is an adherent of Islam, a monotheistic, Abrahamic religion based on the Quran, which Muslims consider the verbatim word of God as revealed to prophet Muhammad. "Muslim" is the Arabic term for "submitter" (one who submits to God).

Muslims believe that God is one and incomparable.[2] Muslims also believe that Islam is the complete and universal version of a primordial faith that was revealed at many times and places before, including through the prophets Abraham, Moses and Jesus.[3] Muslims maintain that previous messages and revelations have been partially changed or corrupted over time,[4] but consider the Quran to be both unaltered and the final revelation from God—Final Testament.[5]

Most Muslims accept as a Muslim anyone who has publicly pronounced the Shahadah (declaration of faith) which states, "I testify that there is none worthy of worship except God and I testify that Muhammad is a Messenger of God." Their religious practices include daily prayers (salat), fasting during Ramadan (sawm), almsgiving (zakat), and the pilgrimage to Mecca (hajj) at least once in a lifetime.[6][7]

A muslim (Arabic: مسلم‎, IPA: [ˈmʊslɪm]; English /ˈmʌzlɨm/, /ˈmʊzlɨm/, /ˈmʊslɨm/ or moslem /ˈmɒzlɨm/[13]) is the participle of the same verb of which islām is the infinitive.[14] A female adherent is a muslima (Arabic: مسلمة‎). The plural form in Arabic is muslimūn (مسلمون), and its feminine equivalent is muslimāt (مسلمات). The Arabic form muslimun is the stem IV participle[15] of the triliteral S-L-M "to be whole, intact".

Other words for Muslim

The ordinary word in English is "Muslim". It is sometimes transliterated as "Moslem", which is an older spelling.[16] “Submitter” is the English equivalent of the Arabic word “Muslim”.[17]

Until at least the mid-1960s, many English-language writers used the term Mohammedans or Mahometans.[18] Although such terms were not necessarily intended to be pejorative, Muslims argue that the terms are offensive because they allegedly imply that Muslims worship Muhammad rather than God.[19]

Variant forms of this word are still used by many Indo-European and Turkic languages. These words are similar to the French, Spanish, Portuguese, Italian, Russian, Turkish, Bosnian, Persian, Kurdish, and Hindi words for "Muslim".[citation needed] 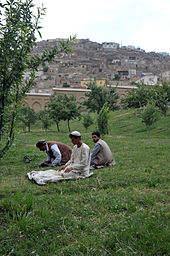 Afghan Muslims praying inside Gardens of Babur in Kabul, Afghanistan.

"A Muslim is a person who has dedicated his worship exclusively to God...Islam means making one's religion and faith God's alone.[20]

The Qur'an is clear on promulgating that every prophet preached the same faith, which centered on the worship of God.[citation needed]

Used to describe earlier prophets in the Qur'an

The Qur'an describes many prophets and messengers as well as their respective followers as Muslim: Adam, Noah, Abraham, Jacob, Moses and Jesus and his apostles are all confirmed as being Muslim by the Qur'an. The Qur'an states that these men were Muslims because they submitted to God, preached His message and upheld His values, which included praying, charity, fasting and pilgrimage. Thus, in Surah 3:52 of the Qur'an, Jesus’ disciples tell Jesus, "We believe in God; and you be our witness that we are Muslims (wa-shahad be anna muslimūn)." In Muslim belief, before the Qur'an, God had given the Torah to Moses, the Psalms to David and the Gospel to Jesus, who are all considered important Muslim prophets.

About 13% of Muslims live in Indonesia, the largest Muslim country,[21] 25% in South Asia,[21] 20% in the Middle East,[21][22] 2% in Central Asia, 4% in the remaining South East Asian countries, and 15% in Sub-saharan Africa.[21] Sizable communities are also found in China and Russia, and parts of the Caribbean. Converts and immigrant communities are found in almost every part of the world.