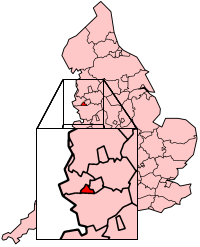 Halton is a local government district in , with borough status and administered by a . It was created in 1974 as a district of , and became a unitary authority area on . It consists of the towns of and and the es of Hale, , Moore and .

Halton dates back to the 12th century (and beyond) when land on both sides of the river belonged to the Barony of Halton. The area borders , and the of Cheshire. The borough straddles the &mdash; the area to the north (including Widnes) is historically part of , that to the south, Cheshire.

The district was originally formed on , , from urban district and part of from Cheshire, and the borough and the parish of Hale from the in Lancashire. The unitary authority associates with the five Merseyside councils to form the "" group and is considered part of the "Liverpool city-region". [ [http://www2.halton.gov.uk/pdfs/news/cityregionprospectus Liverpool City region at Halton] ]

The borough is home to a large number of historic sites:

[ [http://www2.halton.gov.uk/yourcouncil/townsandvillages/daresburyvillage?a=5441 Daresbury Village] Accessed 10 April 2007] is a church well-known as the inspiration for "Alice In Wonderland". Lewis Carroll was born in the village, and his father was rector there. The church contains a carving of a grinning cat, a play on the wildcat in the arms of a local family empowered in the Middle Ages to kill poachers by hanging or garrotting (giving them a "permanent grin").

This is a chart of trend of regional gross value added of Halton and Warrington at current basic prices [http://www.statistics.gov.uk/downloads/theme_economy/RegionalGVA.pdf published] (pp.240-253) by "Office for National Statistics" with figures in millions of British Pounds Sterling.