The City of Preston

i/ˈprɛstən/ is a city and non-metropolitan district in Lancashire, England. It is located on the north bank of the River Ribble, and was granted city status in 2002, becoming England's 50th city in the 50th year of Queen Elizabeth II's reign.[1] The City of Preston district has a population of 131,900, and lies at the centre of the wider Preston sub-area, which has a population of 184,836, and the Central Lancashire sub-region, with a population of 335,000.[2]

The district, formerly known as the Borough of Preston, is named after the urban settlement of Preston which lies in the south of the district, and also contains eight rural civil parishes.

In 1974, the non-metropolitan district of Preston was formed from the County Borough of Preston, Fulwood Urban District, and a major part of Preston Rural District. The district was granted city status in 2002. 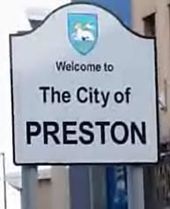 At the most recent elections, Labour regained control with 29 councillors, the Conservatives 21, the Liberal Democrats have six, and one Deepdale Independent.

Freedom of the City

Freedom of the City has been granted to:

The City of Preston contains ten Lancashire County Council electoral divisions with one county councillor in each district.

The City of Preston is currently divided between three Westminster constituencies, namely Preston, Wyre and Preston North, and Fylde.

Historically, Preston has been divided between such constituencies as Preston North, Preston South, and Fylde South although until 1885 it comprised one constituency called Preston but which included most of west Lancashire.

Like numerous other major English towns granted city status since 1889, Preston has no cathedral (see City status in the United Kingdom). Instead, following the granting of city status in the Queen's Golden Jubilee year in 2002, Preston's parish church was elevated by the Church of England to the status of Minster Church in June 2003. 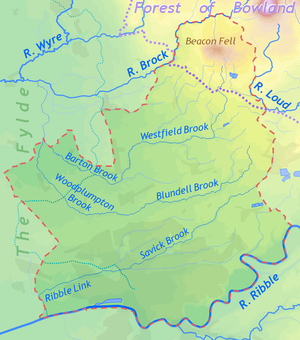 Topography of the City of Preston

The highest point is the summit of Beacon Fell at 266 m (873 ft) above sea level, an isolated fell two miles south of the main range of Bowland Fells just outside the district boundaries. The lowest point lies on the River Ribble in the southwest corner of the district. The Ribble here is tidal and therefore virtually at sea level. The course of the river west of Preston was artificially straightened in the 19th century, to ease passage of shipping to the docks.

The lowland area in the north and east of the district, between Beacon Fell and the Fylde, is a dairy farming area, particularly noted for its cheesemaking dairies. Six of the ten Lancashire Cheese dairies listed on the British Cheese Board's website in 2011 are located in the City of Preston district (and the other four are only a few miles outside).[3] Beacon Fell has a Protected Designation of Origin cheese named after it.[4]

Like most of inland Lancashire, Preston receives a higher than UK average total of rainfall, and is slightly colder. On 10 August 1893 Preston entered the UK Weather Records, with the Highest 5-min total rainfall of 32 mm. As of November 2008 this remains a record.[5]

As with many cities, Preston has developed from a number of former towns and villages. 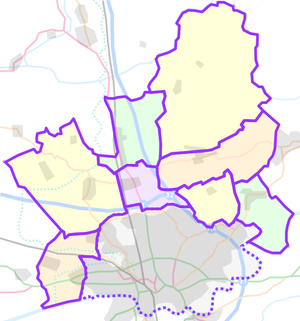 Civil parishes in the City of Preston 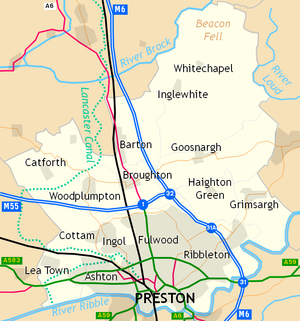 Places in the City of Preston

The southern part of the district is mostly urbanised but the northern part is quite rural. The current borders came into effect on 1 April 1974, when the Local Government Act 1972 merged the existing County Borough of Preston with Fulwood Urban District and part of Preston Rural District. Preston was designated as part of the Central Lancashire new town in 1970. The former Preston Rural District part of the district is divided into a number of civil parishes:

In 2008 a survey revealed that 50% of all children living in the city were living in families suffering from financial depression. An estimated 15,380 youngsters were part of the families on the breadline. The Campaign to End Child Poverty report defined children in poverty as children living in homes where occupants work less than 16 hours a week, or not at all, or where the full amount of tax credit is being claimed. The city was one of the most severely affected areas of the North West outside Liverpool and Manchester, with 21% of children in the city living in households which were completely workless and a further 29% in families struggling to get by with working tax credits. The two worst affected areas of the city were the Deepdale and St George's wards, where 75% and 77% of children respectively were said to be living in poverty.[7]

The City of Preston lies in the Roman Catholic Diocese of Lancaster and the Anglican Diocese of Blackburn.

The 2001 Census recorded 72% of the population as Christians, 10% as having no religion, and 8% as Muslims.[8] The Hindu and Sikh populations are smaller at 3% and 0.6% respectively, but in both cases this represents the highest percentage of any local authority area in the North West. 2% of the city's population were born in other EU countries.