The City of Westminster

i/ˈwɛstmɪnstər/ is a London borough occupying much of the central area of London, England, including most of the West End. It is located to the west of and adjoining the ancient City of London, directly to the east of the Royal Borough of Kensington and Chelsea, and its southern boundary is the River Thames. It is an Inner London borough and was created in 1965 when Greater London was established. At its creation Westminster was awarded city status, which had been previously held by the smaller Metropolitan Borough of Westminster. Aside from a number of large parks and open spaces, the population density of the district is high. Many sites commonly associated with London are located in the borough, including Buckingham Palace, the Houses of Parliament, and 10 Downing Street. The city is divided into a number of localities including the ancient political district of Westminster around the Palace of Westminster; the shopping areas around Oxford Street, Regent Street, Piccadilly and Bond Street; and the night time entertainment district of Soho. Much of the city is residential, and in 2008 it was estimated to have a population of 236,000. The local authority is Westminster City Council.

According to the 2001 census, the city had a population of 181,279. Westminster City Council undertook several studies, supported by both political parties on the council, that indicated that this figure was too low. The Office for National Statistics eventually added 17,500 people to Westminster's population, increasing its grant from the United Kingdom Government. The official population is now 198,779, but some estimates put it at 220,000. Approximately 71% of the population is White (British: 49.0%, Irish: 2.0%, and Other White: 19.0%), 16% are of any Asian ethnicity, 7% Black, 6% Mixed, and 4% belong to other racial groups. About 35% of households are occupied by their owners.

The city is divided into 20 wards, each electing 3 councillors. Westminster City Council is currently composed of 48 Conservative Party members and 12 Labour Party members.[2][3]

The City of Westminster covers all or part of the following areas of London:

The City of Westminster is home to a large number of companies. Many leading global corporations have chosen to locate their global or European headquarters in the City of Westminster. Mayfair and St. James's within the City of Westminster also have a large concentration of hedge fund and private equity funds. The West End is known as the Theatre District and is home to many of the leading performing arts businesses. Soho and its adjoining areas house a concentration of media and creative companies. Oxford Street is one of the leading shopping destinations in the world.[citation needed] The list of companies includes 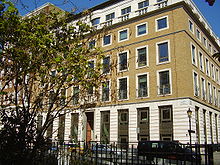 The Hong Kong Economic and Trade Office, London is located in Westminster.[9][30]

Westminster contains many of the most famous sites in London. Some of the popular tourist sites are Buckingham Palace, Palace of Westminster (Houses of Parliament) and Big Ben and nearby Westminster Abbey.

These include Green Park, Hyde Park, Kensington Gardens, Regent's Park and St. James's Park. In addition to parks and open spaces within the borough, the City owns and maintains East Finchley Cemetery and crematorium in the London Borough of Barnet.

The City of Westminster is served by 27 tube stations, and 10 of the 11 Underground lines (the Waterloo and City line is the exception).

Westminster City Council now has electric vehicle charging points in 15 locations through the city (13 car parks and two on-street points). Users pay an annual fee to cover administration costs to register and use the points.[41]

Motorcyclists are subject to a motorcycle parking charge that has caused protest in the borough. Furthermore, Outrage has been caused as Westminster City Council announce that they are set to implement further parking regulations in the City of London as of 1st December 2011. 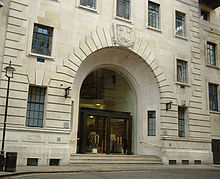 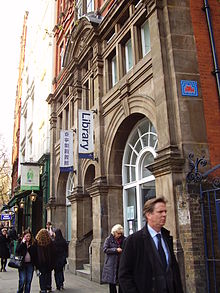 The London Library, an independent lending library, is located at 14 St. James Square in the City of Westminster.[9][43]

In April 2008 the street artist Banksy created a work "One Nation Under CCTV" on the side of the Newman Street Royal Mail building in Soho, apparently accomplished by erecting scaffolding overnight under the direct observation of a CCTV camera. The work was described by the Daily Mail as "his biggest work yet in central London".[59] Westminster City Council stated in October 2008 that the work would be painted over as it is graffiti. The council explained that it would remove any graffiti, regardless of the reputation of its creator, and specifically stated that Banksy "has no more right to paint graffiti than a child". Robert Davis, the chairman of the council planning committee told The Times newspaper: "If we condone this then we might as well say that any kid with a spray can is producing art". The work was painted over in April 2009.[60][61]