The City of London Police is the territorial police force responsible for law enforcement within the City of London, England, including the Middle and Inner Temple. The service responsible for law enforcement within the rest of Greater London is the Metropolitan Police Service, a separate organisation. The City of London, which is now primarily a financial centre with a small resident population but a large commuting workforce, is the historic core of London, and has an administrative history distinct from that of the rest of the metropolis, of which its separate police force is one manifestation.

Nationally, as a result of the Fraud Review 2008 the force was recognised as the lead police force for fraud and granted funding from government to further develop its capabilities nationally and internationally.[3] The police authority is the Common Council of the City, and unlike other territorial forces in England there will not be an elected commissioner replacing that police authority by way of the Police Reform and Social Responsibility Act 2011.[4]

With around 1,200 employees, including 813 police officers, 85 Special Constables, 48 PCSOs and three police stations (located in Snow Hill, Wood Street and Bishopsgate), the City of London Police is the smallest territorial police force in England and Wales, both in terms of geographic area - the square mile centre of London - and the number of police officers.[2] The Commissioner since December 2010 is Adrian Leppard, formerly Deputy Chief Constable of Kent Police.

The City of London area has a resident population of 8,043 with 4,421 households. These numbers are increased by the daily influx of approximately 300,000 commuters working in the City, with an additional 300,000 cars passing through the square mile a day, along with thousands of tourists.[5]

History of policing in the City

Policing in the City of London has existed since Roman times. Wood Street Police Station, the current headquarters of the City Police, is built on part of the site of a Roman fortress, which may have housed some of the first police in the City.[6]

Prior to 1839, the responsibility for policing in the City was divided between day and night, primarily under the two Sheriffs. It was these officers responsible for ensuring the Night Watch was maintained. Policing during the day eventually came under the City Patrol, which evolved into the City Day Police, which was modelled on the Metropolitan Police. In 1838, the Day Police and Night Watch were merged into a single organisation. The passing of the City of London Police Act 1839 gave statutory approval to the force as an independent police body, heading off attempts made to merge it with the Metropolitan Police.[7]

During 1842, the City Police moved its headquarters from Corporation's Guildhall to 26 Old Jewry, where it remained until it was relocated to Wood Street in 2002.[6]

The City Police is organised into five Basic Command Units:[8]

Because of the City's role as a world financial centre, the City of London Police has developed a great deal of expertise in dealing with fraud and "is the acknowledged lead force within the UK for economic crime investigation."[9] The Economic Crime Directorate includes the Fraud Squad, the Cheque and Credit Card Unit, the Money Laundering Investigation Unit, the Dedicated Cheque and Plastic Crime Unit, the Fraud Intelligence Development Team and the Overseas Corruption Unit.[10] 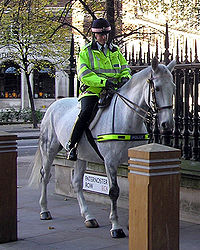 Their helmet has altered little since its introduction in 1865 and has a crest instead of the white metal boss worn on the Metropolitan Police helmet. The "helmet plate" or badge is the City of London coat of arms; this is unique for a UK police force in that it does not include the Royal Crown, neither does it have the Brunswick Star, which is used on most other police helmets in England and Wales.[12]

On State and ceremonial occasions the Commissioner and his deputy wear a special full-dress uniform and hat (pictured below); other than on these occasions, they wear standard uniform.

The City of London warrant card badge is the city shield enameled in red and white. The City motto "Domine Dirige Nos" (Lord Guide Us) in gold on a black scroll above the words "City of London Police". Two griffins surround the shield. The warrant number is printed below and the word "police" is written beneath that in braille (courtesy of former blind Home Secretary David Blunkett).

The ranks from constable to chief superintendent are the same as all other British police forces. The three senior ranks are similar to those used by the Metropolitan Police.

The City Specials are led by a Commandant. Below him are Special Superintendents who head Basic Command Units composed of other Special Constables.

The City of London Special Constabulary were awarded the Ferrers Trophy in 2006 for the efforts of their officers after July 7, 2005's terrorist attacks. The award is given annually to police volunteers, for exceptional dedication and innovation. It was the first time in the award's history that an entire Special Constabulary received the trophy.[13]

The current Special Commandant (Chief Officer) is Ian Miller MBE who was the first Special to ever be given permission by the Home Office to serve with two police forces simultaneously. This was possible because he lived in Scotland but worked in London Monday to Friday.[14]

Since 1900 the following officers of the City of London Police were killed while attempting to prevent or stop a crime in progress:[15]

Teams of the City of London Police participated in the Olympic games three times in the tug of war tournament. At the 1908 Summer Olympics they won the gold medal, beating a team of the Liverpool Police in the final. In 1912 the team was beaten in the final by one of the Stockholm Police. At the 1920 Summer Olympics the team regained its title, beating the Netherlands. This was the last time tug of war was an Olympic sport, which means the City of London Police is still the reigning Olympic champion.[16][17]