Coat of arms of the City of London as shown on Blackfriars station. The Latin motto reads Domine Dirige Nos, "Lord, guide us".

The City of London Corporation (also known as the Corporation of London)[1] is the municipal governing body of the City of London. It exercises control only over the City (the "Square Mile", so called for its approximate area), and not over Greater London. It has three main aims: to promote the city as the world's leading international financial and business centre; to provide local government services; and to provide a range of additional services for the benefit of London, Londoners and the nation.

In Anglo-Saxon times, communication and consultation between the city's rulers and its citizens took place at the Folkmoot. Administration and judicial processes were conducted at the Court of Husting and the non-legal part of the court's work evolved into the Court of Aldermen.[2]

There is no surviving record of a charter first establishing the corporation as a legal body, but the city is regarded as incorporated by prescription, meaning that the law presumes it to have been incorporated because it has for so long been regarded as such even in the absence of written documentation.[3] The corporation's first recorded royal charter dates from around 1067, when William the Conqueror granted the citizens of London a charter confirming the rights and privileges that they had enjoyed since the time of Edward the Confessor. Numerous subsequent royal charters over the centuries confirmed and extended the citizens' rights.[4]

Around 1189, the city gained the right to have its own mayor, eventually coming to be known as the Lord Mayor of London. Over time, the Court of Aldermen sought increasing help from the city's commoners and this was eventually recognised with commoners being represented by the Court of Common Council, known by that name since at least as far back as 1376.[5]

With growing demands on the corporation and a corresponding need to raise local taxes from the commoners, the Common Council grew in importance and has been the principal governing body of the corporation since the 18th century.

In 1897, the Common Council gained the right to collect local rates when it took over the powers and duties of the City Commissioners of Sewers.

The corporation is unique among UK local authorities for its continuous legal existence over many centuries, and for having the power to alter its own constitution, which is done by an Act of Common Council.[6]

Local government legislation often makes special provision for the City to be treated as a London borough and for the Common Council to act as a local authority. The Corporation does not have general authority over the Middle Temple and the Inner Temple, two of the Inns of Court adjoining the west of the City which are historic extra-parochial areas, but many statutory functions of the Corporation are extended into these two areas.

The Chief Executive of the administrative side of the Corporation holds the ancient office of Town Clerk of London.

An attempt at reform was made, intending to amalgamate the corporation with the local government structures serving the rest of London at the end of the 19th century. A Royal Commission on the Amalgamation of the City and County of London reported a mechanism for this to be achieved in 1894. However, this proposed reform failed. The City also avoided major modernising in the London Government Act 1963, where it the was the only one of the 33 London local authorities not to be a London Borough.

The City of London Corporation was not reformed by the Municipal Corporations Act 1835, nor by subsequent legislation, and with time has become increasingly anomalous. In 1801 the City had a population of about 130,000, but increasing development of the City as a central business district led to this falling to below 5,000 after the Second World War.[7] It has risen slightly to around 9,000 since, largely due to the development of the Barbican Estate.

Eligible voters must be at least 18 years old and a citizen of the United Kingdom, a European Union country, or a Commonwealth country, and either:

Each body or organisation, whether unincorporated or incorporated, whose premises are within the City of London may appoint a number of voters based on the number of workers it employs. Limited liability partnerships fall into this category.

Though workers count as part of a workforce regardless of nationality, only certain individuals may be appointed as voters. Under section 5 of the City of London (Ward Elections) Act 2002, the following are eligible to be appointed as voters (the qualifying date is September 1 of the year of the election):

Main article: Wards of the City of London

The City of London is divided into twenty-five wards, each of which is an electoral division, electing one Alderman and a number of Councilmen based on the size of the electorate. The numbers below reflect the changes caused by the City of London (Ward Elections) Act.

There are over one hundred livery companies in London. The companies were originally guilds or trade associations; in modern times, much of their role is ceremonial. The senior members of the livery companies, known as liverymen, form a special electorate known as Common Hall. Common Hall is the body that chooses the Lord Mayor of the City, the sheriffs and certain other officers.

The Court of Aldermen

Wards originally elected aldermen for life, but the term is now only six years. The alderman may, if he chooses, submit to an election before the six-year period ends. In any case, an election must be held no later than six years after the previous election. The sole qualification for the office is that Aldermen must be Freemen of the City.

Aldermen are ex officio Justices of the Peace. All Aldermen also serve in the Court of Common Council.

The Court of Common Council 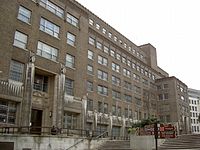 The north wing of Guildhall, which houses most of the administration of the City.

Each ward may choose a number of common councilmen. A Common Councilman must be a registered voter in a City ward, own a freehold or lease land in the City, or reside in the City for the year prior to the election. He must also be over 21; a Freeman of the City; and a British, Irish, Commonwealth or EU citizen. Common Council elections are held every four years, most recently in March 2009. Common Councilmen may use the initials CC after their names.

The Common Council is the police authority for the City of London,[10] a police area that covers the City including the Inner Temple & Middle Temple and which has its own police force — the City of London Police — separate to the Metropolitan Police, which polices the remainder of Greater London.

The Lord Mayor and the Sheriffs

The City of London has a strong collection of ceremonies. Its policy head says "it is undoubtedly the case that we have more tradition and pageantry than most"[11], for example the yearly Lord Mayor's Show.

Tax journalist Nicholas Shaxson said: "Whenever the Queen makes a state entry to the City, she meets a red cord raised by City police at Temple Bar, and then engages in a col­ourful ceremony involving the lord mayor, his sword, assorted aldermen and sheriffs, and a character called the Remembrancer. In this ceremony, the lord mayor recognises the Queen's authority, but the relationship is complex: as the corporation itself says: "The right of the City to run its own affairs was gradually won as concessions were gained from the Crown.""[12]

The City of London Corporation maintains around 10,000 acres (40 km2) of public green spaces[13] - mainly conservation areas / nature reserves - in Greater London and the surrounding counties. The most well-known of the conservation areas are Hampstead Heath and Epping Forest. Other areas include Ashtead Common, Burnham Beeches, Highgate Wood and the South London Commons (six commons on the southern fringe of London).[14]

Unusually, the Corporation also runs the unheated Parliament Hill Lido, as it is part of Hampstead Heath inherited from the London Residuary Body in 1989.

City of London residents may send their children to schools in neighbouring Local Education Authorities (LEAs).

The Guildhall School of Music and Drama is owned and funded by the Corporation.

The City has come under criticism for the determining role of business votes over the residential vote: businesses in the City have around 24,000 votes, dwarfing the residents' 8,000 votes.[8] Tax justice campaigner Nicholas Shaxson said: "Voting would reflect the wishes not of the City's 300,000 workers, but of corporate managements. So Goldman Sachs and the People's Bank of China would get to vote".[17] Journalist George Monbiot complained: "It's not the workers who decide how the votes are cast, but the bosses, who "appoint" the voters. Plutocracy, pure and simple."[18]

"Nowadays, with its Lord Mayor, its Beadles, Sheriffs and Aldermen, its separate police force and its select electorate of freemen and liverymen, the City of London is an anachronism of the worst kind. The Corporation, which runs the City like a one-party mini-state, is an unreconstructed old boys' network whose medievalist pageantry camouflages the very real power and wealth which it holds." - pp110, Rough Guide to England, 2006

"The corporation is a group of hangers-on, who create what is known as the best dining club in the City ... a rotten borough." - John McDonnell, during the debates on the Ward Elections Act.[19]

The Corporation has been criticised for its secrecy due to it being exempt from freedom of information legislation, for example relating to its opaque private fund, the City Cash.[17] Shaxson alleges that the fund "helps buy off dissent"[12] and Monbiot claims that "it can spend as it wishes, without democratic oversight. As well as expanding its enormous property portfolio, it uses this money to lobby on behalf of the banks".[18]

Further criticism of the Corporation was raised during the Occupy London protests in that area in 2011, in which journalist George Monbiot claimed that the City of London is "the only part of Britain over which parliament has no authority" and that the mayor of London's mandate stops "at the boundaries of the Square Mile".[18] These claims were robustly denied by the head of policy at the Corporation.[11]

Campaigner Nicholas Shaxson calls the Remembrancer the City's "official lobbyist in parliament"; the Remembrancer is privileged to sit opposite the Speaker in the House of Commons.[12] However, his official role is to "maintain and enhance the City's status and ensure that its established rights are safeguarded".[17]