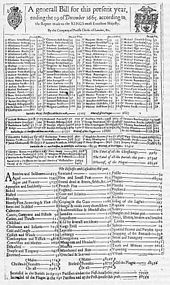 The Great Plague (1665–1666) was a massive outbreak of disease in the Kingdom of England (modern day United Kingdom) that killed an estimated 100,000 people, 20% of London's population.[1] The disease is identified as bubonic plague, an infection by the bacterium Yersinia pestis, transmitted through a flea vector. It had arrived in Europe 300 years previously as the Black Death and returned in fresh outbreaks every 10 years or so, of which the Great Plague of London was the last major outbreak.[2] The 1665-1666 epidemic was on a far smaller scale than the earlier "Black Death" pandemic, a virulent outbreak of disease in Europe between 1347 and 1353.[3] The plague of 1665 was only remembered afterwards as the "great" plague because it was one of the last widespread outbreaks in England.[4]

The Great Plague of 1665 was the last major outbreak of the plague in England. Some other previous outbreaks of the plague in England were the 1636 plague, when some 10,000 had died, and the 1625 plague, when some 35,000 died.[5] In 1603, the plague killed 30,000 Londoners.[6] The English outbreak is thought to have spread from the Netherlands, where the bubonic plague had occurred intermittently since 1599, with the initial contagion arriving with Dutch trading ships carrying bales of cotton from Amsterdam. Amsterdam was ravaged in 1663–1664, with a mortality given as 50,000.[7] The dock areas outside of London, and the parish of St. Giles-in-the Fields where poor workers crowded into ill-kept structures, were the first areas struck by the plague. As records were not kept on the deaths of the very poor, the first recorded case was a Rebecca Andrews, on 12 April 1665. Another suspected source of the plague was cats and dogs, of which the Lord Mayor of London at the time had the majority exterminated.

By July 1665, plague was in the city of London itself. King Charles II of England, his family and his court left the city for Oxfordshire. The aldermen and the majority of the other city authorities opted to stay at their posts. The Lord Mayor of the city, Sir John Lawrence also decided to stay in the city. Businesses were closed when most wealthy merchants and professionals fled. Only a small number of clergymen, physicians and apothecaries chose to remain, as the plague raged throughout the summer. Among the people who chose to stay were Samuel Pepys, the diarist, and Henry Foe, a saddler who lived in East London. While Pepys provides an account of the Plague through his diary, Henry Foe's nephew Daniel Defoe published A Journal of the Plague Year, a fictional account of the plague, in 1722, possibly based on Foe's journals.

Plague doctors traversed the streets, diagnosing victims, although many of them were unqualified physicians. Several public health efforts were attempted. Physicians were hired by city officials, and burial details were carefully organized. But panic spread through the city, and in the fear of contagion, people were hastily buried in overcrowded pits. The City Corporation ordered a cull of dogs and cats.[citation needed] - A poor decision, since those animals - mostly the cats - kept the population of rats (the real culprits) in check. Authorities ordered fires to be kept burning night and day, in hopes that the air would be cleansed. Substances giving off strong odours, such as pepper, hops or frankincense, were also burned, in an attempt to ward off the infection. London residents were strongly urged to smoke tobacco.[citation needed]

Though concentrated in London, the outbreak affected other areas of the country. Perhaps the most famous example was the village of Eyam in Derbyshire. The plague allegedly arrived with a merchant carrying a parcel of cloth sent from London, although this is a disputed fact. The villagers imposed a quarantine on themselves to stop the further spread of the disease. Spread of the plague was slowed in surrounding areas, but the cost to the village was the death of around 75% of its inhabitants.

Records state that deaths in London crept up to 1,000 people per week, then 2,000 people per week and, by September 1665, to 7,000 people per week. By late autumn, the death toll began to slow until, in February 1666, it was considered safe enough for the King and his entourage to return to the city. By this time, however, trade with the European continent had spread this outbreak of plague to France, where it died out the following winter.

"Necropolis. London and its dead" by Catherine Arnold. Simon and Shuster, London, 2006.