Hops
This article is about the beer ingredient. For the botanical article on the hop plant, see Humulus. For other meanings, see Hop (disambiguation).
"Hopps" redirects here. For the surname, see Hopps (surname). 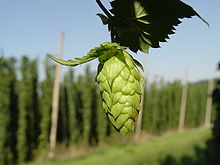 Hops are the female flower clusters (commonly called seed cones or strobiles), of a hop species, Humulus lupulus.[1] They are used primarily as a flavoring and stability agent in beer, to which they impart a bitter, tangy flavor, though hops are also used for various purposes in other beverages and herbal medicine. Hops were cultivated continuously around the 8th or 9th century AD in Bohemian gardens in the Hallertau district of Bavaria and other parts of Europe.[2][3] However, the first documented use of hops in beer as a bittering agent is from the eleventh century. Before this period, brewers used a wide variety of bitter herbs and flowers, including dandelion, burdock root, marigold, horehound (the German name for horehound means "mountain hops"), ground ivy, and heather.[4] Hops are used extensively in brewing for their many purported benefits, including balancing the sweetness of the malt with bitterness, contributing a variety of desirable flavors and aromas, and having an antibiotic effect that favors the activity of brewer's yeast over less desirable microorganisms. Historically, it is believed that traditional herb combinations for ales were abandoned when it was noticed that ales made with hops were less prone to spoilage.[5]

The hop plant is a vigorous climbing herbaceous perennial, usually trained to grow up strings in a field called a hopfield, hop garden, or hop yard when grown commercially. Many different types of hops are grown by farmers around the world, with different types being used for particular styles of beer.

The first documented instance of hop cultivation was in 736, in the Hallertau region of present-day Germany, although the first mention of the use of hops in brewing in that country was 1079.[6] Not until the thirteenth century in Germany did hops begin to start threatening the use of gruit for flavoring. In Britain, hopped beer was first imported from Holland around 1400; but hops were condemned in 1519 as a "wicked and pernicious weed".[citation needed] In 1471, Norwich, England, banned use of the plant in the brewing of ale (beer was the name for fermented malt liquors bittered with hops, until such recent times as the words were used as synonyms), and not until 1524 were hops first grown in southeast England. It was another century before hop cultivation began in the present-day United States, in 1629.[7]

Important production centers are the Hallertau in Germany (which, in 2006, had more hop-growing area than any other country on Earth),[8] the Yakima (Washington) and Willamette (Oregon) valleys, and western Canyon County, Idaho (including the communities of Parma, Wilder, Greenleaf, and Notus).[9] The principal production centres in the UK are in Kent (which produces Kent Goldings hops) and Worcestershire.[10][11] Essentially all of the harvested hops are used in beer making. 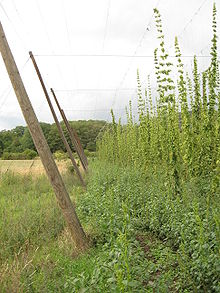 Hops are a climbing plant. They are trained up strings or wires which support the plants and allow them significantly greater growth with the same sunlight profile. Energy that would have been required to build structural cells is also freed for crop growth.[citation needed]

Until mechanisation, the need for massed labor at harvest time meant hop-growing had a big social impact. For example, many of those hop picking in Kent, a hop region first mechanised in the 1960s, were from eastern areas of London. This provided a break from urban conditions that was spent in the countryside. Whole families would come down on special trains and live in hoppers' huts and gradients for most of September, even the smallest children helping in the fields.[13][14]

In Kent, many growers issued their own currency to those doing the labor because of a shortage of small denomination coin of the realm. In some cases, the coins issued, often adorned with fanciful hops images, were themselves quite beautiful.[15]

People also came from Birmingham and other Midlands cities to pick hops in the Malvern area of Worcestershire. Some photographs have been preserved.[16]

Sonoma County in California was, pre-mechanization, a major US producer of hops. As in other hop-growing regions, the labor-intensive harvesting work involved large numbers of migrant workers traveling from other parts of the state or elsewhere for the annual hop harvest.[17][18] During the Great Depression, many workers were migrant laborers from Oklahoma and the surrounding region who had recently come to California. Others included locals, particularly older school children. Sometimes whole families would work in the harvest. The remnants of this significant hop industry are still noticeable in the form of old hop kilns that survive in Sonoma County. In part because of the hop industry's importance to the county, local Florian Dauenhauer of Santa Rosa, the seat of Sonoma County, created one of the earliest and most significant hop-harvesting machines but ironically this mechanization helped destroy the local industry.[17] It enabled large-scale mechanized production which moved to larger farms in other areas.

As of 2005, the ten leading countries for hop cultivation (based on reported total production[19]) were these. 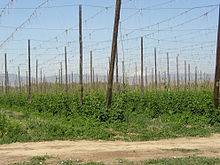 Hops are usually dried in an oast house before they are used in the brewing process, but are sometimes used to make "wet-hop" beer immediately after a harvest.[21] Hop resins are composed of two main acids: alpha and beta acids.[22]

Alpha acids have a mild antibiotic/bacteriostatic effect against Gram-positive bacteria, and favor the exclusive activity of brewing yeast in the fermentation of beer. Alpha acids are responsible for the bitter flavor in the beer. 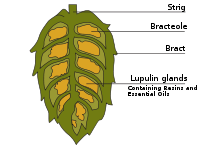 Cross-section drawing of a hop

Beta acids do not isomerize during the boil of wort, and have a negligible effect on beer taste. Instead they contribute to beer's bitter aroma, and high beta acid hop varieties are often added at the end of the wort boil for aroma. Beta acids may oxidize into compounds that can give beer off-flavors of rotten vegetables or cooked corn.

The effect of hops on the finished beer varies by type and use, though there are two main hop types: bittering and aroma. Bittering hops have higher concentrations of alpha acids, and are responsible for the large majority of the bitter flavor of a beer. European (so called "noble") hops typically average 5–9% alpha acids by weight, and the newer American species typically ranging from 8–19% aabw. Aroma hops usually have a lower concentration of alpha acids (~5%) and are the primary contributors of hop aroma and (non-bitter) flavor. Bittering hops are boiled for a longer period of time, typically 60–90 minutes, in order to maximize the isomerization of the alpha acids. They often have inferior aromatic properties, as the aromatic compounds evaporate off during the boil.

The degree of bitterness imparted by hops depends on the degree to which otherwise insoluble alpha acids (AAs) are isomerized during the boil, and the impact of a given amount of hops is specified in International Bitterness Units (IBUs). Unboiled hops are only mildly bitter. On the other hand, the (non-bitter) flavor and aroma of hops come from the essential oils, which evaporate during the boil.

Aroma hops are typically added to the wort later to prevent the evaporation of the essential oils, to impart "hop taste" (if during the final 30 minutes of boil) or "hop aroma" (if during the final 10 minutes, or less, of boil). Aroma hops are often added after the wort has cooled and while the beer ferments, a technique known as "dry hopping" which contributes to the hop aroma. The four major components of the essential oil of hops are myrcene, humulene, caryophyllene, and farnesene which comprise about 60–80% of the oil for most hop varieties.

Today a substantial amount of "dual-use" hops are used as well. These have high concentrations of alpha acids and good aromatic properties. These can be added to the boil at any time, depending on the desired effect.[23]

Flavors and aromas are described appreciatively using terms which include "grassy", "floral", "citrus", "spicy", "piney," "lemony," and "earthy".[citation needed] Many pale lagers have fairly low hop influence, while lagers marketed as Pilsener or brewed in the Czech Republic may have noticeable noble hop aroma. Certain ales (particularly the highly-hopped style known as India Pale Ale, or IPA) can have high levels of hop bitterness. 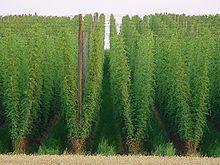 The term noble hops traditionally refers to four varieties of hop which are low in bitterness and high in aroma. They are the central European cultivars, Hallertau, Tettnanger, Spalt, and Saaz.[26] They are each named for a specific region or city in which they were first grown or primarily grown. They contain high amounts of the hop oil humulene and low amounts of alpha acids cohumulone and adhumulone, as well as lower amounts of the harsher-tasting beta acids lupulone, colupulone, and adlupulone.

Their low relative bitterness but strong aroma are often distinguishing characteristics of European-style lager beer, such as Pilsener, Dunkel, and Oktoberfest/Märzen. In beer, they are considered aroma hops (as opposed to bittering hops); see Pilsner Urquell as a classic example of the Bohemian Pilsener style, which showcases Noble hops.

As with grapes, land where the hops were grown affects the hops' characteristics. Much as Dortmunder beer may only within the EU be labelled "Dortmunder" if it has been brewed in Dortmund, Noble hops may only officially be considered "Noble" if they were grown in the areas for which the hops varieties were named.

Some consider the English varieties Fuggle and East Kent Goldings to be noble. They are characterized through analysis as having an alpha:beta ratio of 1:1, low alpha-acid levels (2–5%) with a low cohumulone content, low myrcene in the hop oil, high humulene in the oil, a ratio of humulene:caryophyllene above three, and poor storability resulting in them being more prone to oxidation. In reality this means that they have a relatively consistent bittering potential as they age, due to beta-acid oxidation, and a flavor that improves as they age during periods of poor storage.[27]

The only major commercial use for hops is in beer, although hops are also an ingredient in Julmust, a carbonated beverage similar to soda that is popular in Sweden during December, as well as Malta, a Latin American soft drink. They are also used for flavor in some blended teas.

Hops are also used in herbal medicine in a way similar to valerian, as a treatment for anxiety, restlessness, and insomnia.[28] A pillow filled with hops is a popular folk remedy for sleeplessness. Hops may be used alone, but more frequently they are combined with other herbs, such as valerian. The relaxing effect of hops may be due, in part, to the specific chemical component dimethylvinyl carbinol.[29][30] Hops tend to be unstable when exposed to light or air and lose their potency after a few months' storage.

Dermatitis sometimes results from harvesting hops. Although few cases require medical treatment, it is estimated that 3% of the workers suffer some type of skin lesions on the face, hands, and legs.[31] Hops are toxic to dogs, resulting in life-threatening hyperthermia.[32]