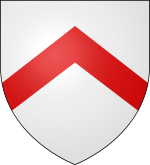 A chevron (also spelled cheveron, especially in older documents) is an inverted V-shaped pattern. The word is usually used in reference to a kind of fret in architecture, or to a badge or insignia used in military or police uniforms to indicate rank or length of service, or in heraldry and the designs of flags (see flag terminology).

The chevron occurs in early art including designs on pottery and rock carvings. Examples can be found approximately 1800 BC in archaeological recovery of pottery designs from the palace of Knossos on Crete in the modern day country of Greece.[1]

A chevron is one of the ordinaries in heraldry, one of the simple geometrical figures which are the chief images in many arms. It can be subject to a number of modifications. When the ends are cut off in a way that looks like the splintered ends of a broken piece of wood, with an irregular zig-zag pattern, it is called éclaté.[2] When shown as a smaller size than standard, it is a diminutive called a chevronel.

Chevrons appeared early in the history of heraldry, especially in Normandy. In Scandinavia the chevron is known as sparre; an early example appears in the arms of Arvid Gustavsson Sparre.

In areas observing Commonwealth of Nations or United States doctrine, chevrons are used as an insignia of enlisted or NCO rank by military forces and by police. One chevron usually designates a lance corporal, two a corporal, and three a sergeant. One to four "rockers" may be also be incorporated to indicate various grades of sergeant. In American usage, chevrons typically point up, or on shoulderboards towards the neck; in Commonwealth usage they usually point down, or on shoulderboards away from the neck.

Other uses as insignia

French automobile manufacturer Citroën has used a two-chevron logo along its history.

The 2009-10 version of the Manchester United home kit has a black chevron on the front of the shirt, on the chest. This was added to honour the shirt worn by the club when they first won the FA Cup in 1909.

In some armies, small chevrons are worn on the lower left sleeve to indicate length of service, akin to service stripes in the U.S. military.

The Israel Defense Forces use chevrons in various orientations as organisational designators on their vehicles, specifically which company within a battalion they belong to. A downward-pointing chevron would mean it belongs to its battalion's first company, a forward-pointing one to the second, upward the third and backward the fourth company.[3]

NASA also has a chevron in its "meatball" logo.

The Phantom Regiment Drum and Bugle Corps, a DCI World Class drum corps, uses the chevron as its emblem; many past and present members sport chevron tattoos. The chevron was also the basis for the closing drill formation for its 2006 field show Faust.