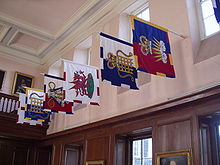 Banners bearing heraldic badges of several officers of arms at the College of Arms in London.

An officer of arms is a person appointed by a sovereign or state with authority to perform one or more of the following functions:

The medieval practice of appointing heralds or pursuivants to the establishment of a noble household is still common in European countries, particularly those in which there is no official heraldic control or authority. Such appointments are also still made in Scotland, where four private officers of arms exist. These appointments are all purely advisory.

In England, the authority of the thirteen officers of arms in ordinary who form the corporation of the Kings, Heralds, and Pursuivants of Arms extends throughout the Commonwealth, with the exception of Scotland, Canada and South Africa. In Scotland, the Lord Lyon King of Arms, and the Lyon Clerk and Keeper of the Records control matters armorial within a strict legal framework not enjoyed by their fellow officers of arms in London, and the court which is a part of Scotland's criminal jurisdiction has its own prosecutor, the court's Procurator Fiscal, who is however not an officer of arms . Lord Lyon and the Lyon Clerk are appointed by the crown, and, with the Crown's authority, Lyon appoints the other Scottish officers. The officers of arms in ordinary who form the College of Arms in England are members of the royal household and receive a nominal salary. The officers of arms in Scotland are also members of the royal household.

In the Republic of Ireland, matters armorial and genealogical come within the authority of an officer designated the Chief Herald of Ireland. The legal basis for Ireland's heraldic authority, and therefore all grants since 1943, has been questioned by the Attorney General [1], therefore, on May 8, 2006 Senator Brendan Ryan introduced the Genealogy & Heraldry Bill, 2006, [2] in Seanad Éireann (Irish Senate) to remedy this situation and legitimise actions since the transfer of power from the Ulster King of Arms.

In the Netherlands, officers of arms do not exist as permanent functions. Private heraldry is not legislated, and state heraldry and the heraldry of the nobility is regulated by the High Council of Nobility. During the royal inauguration ceremony however, two Kings of Arms and two or four Heralds of Arms have figured. These were usually members of the High Council of Nobility. During the inaugurations of Wilhelmina and Juliana, the Kings of Arms wore nineteenth-century style court dress, whereas the Heralds wore tabards. All officers carried rods and wore chains of office.[1] In the inauguration of Queen Beatrix in 1980, the ceremonial office was held by members of the resistance, Erik Hazelhoff Roelfzema being the elder King of Arms.[2] Like most other participants in the pageant the officers of arms were no longer wearing ceremonial dress, but white tie instead. The senior King of Arms proclaims the King to be inaugurated after he or she has sworn allegiance to the constitution. The Heralds step outside the New Church in Amsterdam, where the inauguration ceremony is held, to announce this fact to the people gathered outside the church.[3]