The word crest is often mistakenly applied to a coat of arms. For further information see Heraldry. For Japanese usage, see mon (badge). 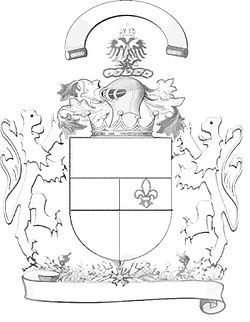 A crest is a component of an heraldic display, so called because it stands on top of a helmet, as the crest of a jay stands on the bird's head.

The earliest heraldic crests were apparently painted on metal fans, and usually repeated the coat of arms painted on the shield, a practice which was later discontinued. Later they were sculpted of leather and other materials.

Originally, the crest was often "continued into the mantling", but today the crest normally stands within a wreath of cloth, called a torse, in the principal tinctures of the shield (the liveries). Various kinds of coronet may take the place of the torse, though in some unusual circumstances the coronet sits atop a torse, and is either defined as all or part of a crest.[1] The most frequent crest-coronet is a simplified form of a ducal coronet, with four leaves rather than eight. Towns often have a mural crown, i.e. a coronet in the form of embattled stone walls.

Objects frequently borne as crests include animals, especially lions, normally showing only the fore half; human figures, likewise often from the waist up; hands or arms holding weapons; bird's wings. In Germany and nearby countries, the crest often repeats the liveries in the form of a tall hat, a fan of plumes in alternating tinctures, or a pair of curving horns. The horns may have a hole in the tip to hold a cluster of plumes or flowers, and because of this have been imported to English heraldry at least once as elephant's trunks.

Crests are not normally borne by women, or clergy, at least not in the UK, because they did not participate in war or tournaments and thus would not have a helm on which to wear it. An exception is the reigning queens of England or Britain, whose armorial display is indistinguishable from that of kings.

Some armigers used their crest as a personal badge, leading to the erroneous use of the word "crest" to describe a shield or full coat of arms. Such badges are often used by members of Scottish clans. These Scottish crest badges can be used where clan members, who are not armigerous, wear a badge consisting of a clan chief's crest and motto/slogan encircled by a belt and buckle. These crest badges are often erroneously called "clan crests". Even though clan members may purchase and wear such badges, the crest and motto/slogan remain the heraldic property of the clan chief.

There is a widespread misconception, due in part to Victorian stationers' marketing of engraved letterheads, that a crest and a coat of arms belong to everyone with the same family name; but usage by persons not descended from the original grantee constitutes usurpation. Bogus "family crests" continue to be sold to the gullible by heraldic "bucket shops".

Today, the crests of new Knights of the Garter and Bath are carved from lime wood by the Orders' official sculptor, Ian Brennan.[1] These carved insignia are displayed above the knights' assigned choir stalls in the Orders' respective chapels: St George's Chapel at Windsor Castle (Garter) and the Henry VII Lady Chapel at Westminster Abbey (Bath).[2]