Crest badge of a clan chief of a fictional Scottish clan. A clan chief is the only one entitled to three eagle feathers.

Crest badges consist of a crest and a motto/slogan. These elements are heraldic property and protected by law in Scotland. Crest badges may be worn by anyone; however, those who are not entitled to the heraldic elements within, wear a crest badge surrounded by a strap and buckle. Those who own the heraldic elements within, may wear a crest badge surrounded by a plain circlet. The strap and buckle represents that the wearer is a follower of the individual who owns the crest and motto.

Crest badges are commonly worn by members of Scottish clans. These badges usually consist of elements from the clan chief's coat of arms. Clan members who wear their chief's crest and motto surrounded by a strap and buckle, show they are a member of the chief's clan (family).[1] There are established clans that do not have chiefs recognised by the Lord Lyon King of Arms. In such cases clan members sometimes wear the crest badge of the last known chief. Some clans wear crest badges derived from the arms of individuals who were never recognised as clan chiefs. Although "clan crests" are commonly bought and sold, the heraldic crest and motto belong to the chief alone and never the individual clan member.[2]

Crest badges, much like clan tartans, do not have a long history, and owe much to Victorian era romanticism, having only been worn on the bonnet since the 19th century.[3] The original badges used by clans are said to have been specific plants worn in bonnets or hung from a pole or spear.[4] 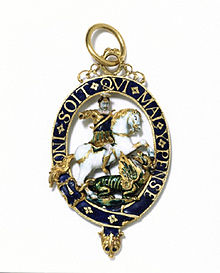 Scottish crest badges should only be illustrated in monochrome, not in colour. Under no circumstances should the strap be coloured blue and the buckle gold, like the badge of the Order of the Garter (pictured).[2]

Although the term "clan crest" is most commonly used, it is a misnomer. There is in fact no such thing as a clan crest. Although it is possible to purchase "clan crests", and the crest badge itself can be owned by a clan member, the heraldic crest and motto of the badge belong to the chief alone and never the clan member. The crest and motto within and are the sole property of the chief, and clan members are only permitted to wear the badge in a show of allegiance to their clan and clan chief. It is illegal for a clan member to misappropriate the chief's crest and motto in acts such as decorating silverware and inscriptions on signet rings and jewellery. In short, coats of arms, crests and mottos are the personal property of one person only, and in terms of "clan crests" they are the property of the clan chief.[2]

Crest badges are specifically used for people to wear, and are made out of silver or white metal. When illustrated, crest badges should only be printed in monochrome, and should not coloured. Women are entitled to wear the crest badge as a brooch, generally worn on the left side, and as such the crest badge may be of gold.[2]

There are established clans which do not have a chief recognised by the Lord Lyon King of Arms. In such cases, clan members usually wear a crest badge which contains the crest and motto of the last known chief.[2] However, there are instances where such clans wear crest badges which are based upon the arms of someone who was never a recognised clan chief. For example, Clan Macfie, which current does not have a chief, uses a crest badge which is derived from the arms of one of the first two Macfies who registered Arms at Lyon Court.[5] Another clan —Clan MacEwen— whose chiefly line has been untraced since the 15th century, has a crest badge containing the crest and motto of a baronet bearing the surname McEwen. Oddly enough, the McEwen Baronets may not have any actual link with the main Clan MacEwen at all.[6] Another instance is the crest badge of Clan MacInnes. This crest badge is based upon a modern coat of arms of an armigerous clan member, not a clan chief.[note 1]

According to the English officers of arms John Martin Robinson and Thomas Woodcock, crests have played a relatively insignificant role in Scottish heraldry when compared to English heraldry. In consequence many Scottish armigers, including clan chiefs, have comparatively similar crests to one another.[8] Because of this, crest badges can sometimes show an obvious association with another clan. For example, clans associated with the Chattan Confederation share very similar crest badges bearing wild cats.[9][note 2] Clans associated with Clan Campbell —Clan Campbell of Breadalbane, Clan MacIver and Clan MacTavish— use a crest badges which contain similar crests and mottoes that allude to that of the chief of Clan Campbell.[10][11][12][13]

Who is entitled to wear a crest badge?

A person does not need to be a member of a clan society to be able to wear a crest badge. Any clan member has a right to it, not just clan societies and clan society members. According to the Court of the Lord Lyon clan membership goes with the surname. Although, today many people who do not bear a clan surname do wear crest badges of their mother's clan, and anyone who offers their allegiance to a clan chief is a member of a clan (unless the chief decides to refuse that person's allegiance). Many people bear names that, while not actual clan surnames, are sept names or associated names of certain clans. Surnames such as Smith, Wright, Fletcher, and Miller are examples as such names that are associated names of many clans (as every clan would have its own smiths, wrights, fletchers and millers). It is up to the individual to explore their personal ancestry and discovery the correct clan that they belong to.[2][14]

A clan chief is the head of his or her clan/family, and is the representer of the family's founder. A clan chief must be recognised as such by the Lord Lyon King of Arms, and must possess the undifferenced arms of their name.[15]

Clan chiefs may wear their crest simpliciter, that is without being encircled by the motto and without any feathers. It is more common, however, for a clan chiefs to wear their own personal crest within a plain circlet inscribed with their motto or slogan (pictured left). The chief's crest badge does not contain the strap and buckle that other clan members are permitted to wear. Clan chiefs are also entitled to wear three eagle feathers[note 3] behind the circlet of their crest badge. On certain occasions, such as clan gatherings, it may be appropriate to use real eagle feathers. Clan chiefs that are members of the British Peerage are entitled to wear the appropriate coronet above the circlet on their crest badge, though this is a matter of personal preference.[2]

Clan chieftains are the representers of large branches of a Scottish clan. They are officially recognised as clan chieftains by the Lord Lyon King of Arms.[2]

Clan chieftains, like clan chiefs, may wear their own personal crest within a plain circlet inscribed with their own motto or slogan. Clan chieftains may also wear two small eagle feathers (unlike the chief's three).[note 4] On certain occasions real eagle feathers may be worn behind the crest badge. If a clan chieftain is a member of the British Peerage, he or she is permitted to wear the appropriate coronet above the circlet on their crest badge.[2]

In terms of Scottish Heraldry, an armiger is someone who has registered his or her own coat of arms, or has inherited a coat of arms according to the Laws of Arms in Scotland from an ancestor who had arms recorded in the Lyon Register.[2]

Armigers, like clan chiefs and chieftains, may wear their own personal crest within a plain circlet inscribed with their own motto or slogan. Armigers are permitted to wear one silver eagle feather behind the circlet (or on certain occasions a real eagle feather).[note 5] If an Armiger is a member of the British Peerage he or she is permitted to wear the appropriate coronet above the circlet on their crest badge. If an Armiger is a member of a Scottish clan he or she may wear the crest badge of their chief, however it must be encircled by a strap and buckle (see Un-armigerous clan members below).[2]

Members of Scottish clans are considered, by the Court of the Lord Lyon, to be relatives of their clan chief. They can be either immediate family or extended family. Clan members can also be people who only bear the "clan surname" or a sept name associated with the clan. The Court of the Lord Lyon has also stated that anyone who professes allegiance to both the clan and its chief can be considered a clan member. All clan members may wear the chief's crest encircled by a strap and buckle inscribed with their chief's motto or slogan. The strap and buckle symbolises the membership to the clan and allegiance to the clan chief.[2]