Clan MacDougall is a Highland Scottish clan consisting of the descendants of Dubgall mac Somairle, son of Somerled, who ruled Lorne and the Isle of Mull in Argyll in the 13th century. During the Wars of Scottish Independence the MacDougalls were supporters of William Wallace but later fought in civil war in support of the powerful Clan Comyn, who were rivals to the throne of Scotland, against Robert the Bruce.

Clan MacDougall is a Scottish clan traditionally associated with the lands of Argyll and Lorne in Scotland. Like the Clan Donald or MacDonald and all of its MacDonald branches, the MacDougalls are also descended from Somerled ("Summer Wanderer"), also known as Lord of the Isles. Together they are referred to as the Clann Somhairle. Furthermore they are descended maternally from both the House of Godred Crovan and the Earls of Orkney, through Somerled's wife Ragnhildis Ólafsdóttir, daughter of Olaf I Godredsson, King of Mann and the Isles and Ingeborg Haakonsdottir daughter of Haakon Paulsson, Earl of Orkney. It remains uncertain if the Clann Somhairle are also descendants in some manner of the House of Ivar, but this is commonly argued.[4]

The Clan MacDougall takes its name from Dubgall mac Somairle, the eldest son of Somerled by Ragnhild, who, after his father's death in 1164, held most of Argyll and also islands such as the Isle of Mull, Lismore, Jura, Tiree, Coll, Iona and many others. Likewise the Clan MacDonald of Clan Ranald branch take their name from another of King Somerled's sons called Ranald and the head Clan Donald take their name from Somerled's grandson and Ranald's son who was called Donald.[5]

The Celtic Christian name Dougall, or Dugald, is derived from the Gaelic "dubh-gall", meaning "dark stranger", as distinct from the 'fionn-gall', to which the Dòmhnullaich of the Rìoghach Innse Gall were associated. Dougall's royal descent was acknowledged by the king of Norway, and he styled himself "King of the South Isles and Lord of Lorne". His son, Duncan, and his grandson, Ewan, built castles to defend their dominions, including Dunstaffnage, Dunollie and Duntrune on the mainland, and Aros, Cairnburgh, Dunchonnel and Coeffin on the islands. Dunollie, a craig rising up over seventy feet, was most likely fortified as early as the sixth century and was to become the chief seat. Duncan also built Ardchattan Priory, where the MacDougall chiefs were buried until 1737.

The MacDougalls were mortal enemies of the Clan Campbell and defeated them at the Battle of Red Ford in 1296, led by their chief Alexander MacDougall of Argyll.

The MacDougalls were supporters of William Wallace and King John I of Scotland but were later driven out by supporters of King Robert I of Scotland during the civil wars in Scotland which formed part of the Wars of Scottish Independence. Two years later and Bruce led an army of three thousand men against the MacDougalls. John MacDougall of Lorne set an ambush for them but after a savage engagement the MacDougalls were broken and forced to flee. The MacDougalls lost most of their lands in Argyll which were then passed to the Clan Campbell for their loyalty to the King. However Clan MacDougall fought against Robert the Bruce and the Earl of Atholl at the Battle of Dalry in 1306 where the MacDougalls were victorious. It is said that Bruce came so close to death that he escaped only by ripping off his cloak, which had been grabbed by a MacDougall clansman. The brooch from the cloak is still in the possession of the clan. According to legend, Bruce then made his way to Rathlin, an island lying between Scotland and North East Ireland, where he hid in a cave. While there, he saw a spider repeatedly attempting to build its web, leading him to say "If at first you don't succeed, try try again." VIsitors to Rathlin can still see "Bruce's cave" and visit the remains of Bruce's castle. He returned to Scotland and the MacDougalls were defeated when they fought against him at the Battle of Pass of Brander in 1308.

Alasdair MacDougall married the sister of John Comyn of the Comyn, Scotland's most powerful man. John's son, the "Red Comyn", was next in line as King of Scotland after the Balliols. However this was the time when Bruce made his bid for the Crown. Bruce slew the Red Comyn at the altar rails in Dumfries and the MacDougalls entered into the feud that ended in the utter destruction of the Clan Comyn and the loss of the MacDougalls' islands to Bruce.

In the 17th century during the Civil War the Clan MacDougall were generally Royalist and in 1645 chief Alexander MacDougall led five hundred of his men into battle. After the defeat of James Graham, 1st Marquess of Montrose a Covenanting army under David Leslie was sent to Argyll to deal with the royalist sympathisers. When the Stuart monarchy was restored so were the MacDougall lands.

In the 18th century during the Jacobite Risings the Clan MacDougall supported the Jacobite cause in 1715 and fought at the Battle of Sheriffmuir which the Jacobites lost. The MacDougall chief was forced into exile but later returned to Scotland to live as a fugitive. He was pardoned in 1727.

His son and next chief, Alexander MacDougall did not take part in the Jacobite Uprisings of 1745 to 1746. Although his brother and some of the clansmen did indeed fight as Jacobites at the Battle of Culloden in 1746. The fighting force of the clan at this time is given as 200 men.[5]

The principle collateral branches of the MacDougalls of Dunollie (also spelt, Dunolly), are those of Gallanach and Soraba (now spelt, Soroba). Of the former, MacDougall of Gallanach, was established as a Cadet of the Clan in 1641 when John MacDougall of Torsay was granted the Estate by Alexander MacDougall, 18th of Dunollie. Ownership has remained in the same family since but has passed only male firstly in 1888 and again in 1935 due to the rules of the Macdougall. However, a lineal male descendant of Allan MacDougall (6th Laird of Gallanach from 1793 to 1799), Malcolm Peters MacDougall, currently lives in SW France and has 2 sons and 1 daughter. The Estate of Gallanach passed from Allan MacDougall to his younger brother Patrick in 1799 from whom the current owner, Simon MacDougall, is descended. Jane Patten (née MacDougall), 11th of Gallanach and granddaughter of Patrick, requested that all future family members who became owners of the property should adopt the surname of MacDougall, this being first done by her eldest son, Sir James Patten MacDougall KCB in the late 19th century and again in the mid 20th century by her great-grandson, Major James Williamson MacDougall MC., both with the permission of the Lord Lyon.[citation needed]

The principle cadet branch of the Clan was MacDougall of Raray and Ardmaddie (spelt variously as, Raera, Reray and Rara), or Craigenicht, Ardnahoy and Lunga.[6] The male line of the MacDougalls of Lunga became extinct with the deaths of Lt.-Col. Stewart MacDougall (1915) and his son, Iain MacDougall of Lunga Adj. 2nd Batt. Grenadier Guards, the previous year. (The Lunga estate was inherited by Lt. Col. MacDougall's eldest daughter Helen Margaret MacDougall, who married Major Francis Howard Lindsay and whose son, John Stewart Lindsay adopted the surname Lindsay-MacDougall). Lt. Col. MacDougall had four male first cousins, however.

In the event of the failure of the line of Lunga (or any of its collateral branches), the MacDougalls of Raray are represented by another branch, that of Coll of Ardencaple[7] a son of John (IV) of Raray and Ardmaddie. Allan MacDougall sold the estate of Ardincaple in 1877, it having been five hundred years tradition says eight in the possession of his forefathers.[8] He succeeded his father, Rear-Admiral John MacDougall, of Ardencaple (died 1870), a Captain Commandant of the 1st Easdale Argyll Artillery Volunteers.

Of the MacDougalls of Soraba there is little known.

Chiefs arms: Quartered in these arms are two ancient royal emblems, the Black Galley of Lorn symbolizing descent from the royal house of the Norse and the lion symbolic of the descent from the Scottish Kings of ancient Dal Riada.

Castles owned by the MacDougalls have included: 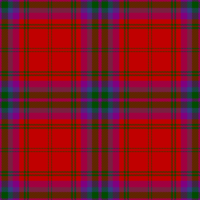