Clan Maclean is a Highland Scottish clan. They are one of the oldest clans in the Highlands and owned large tracts of land in Argyll as well as the Inner Hebrides. Many early MacLeans became famous for their honour, strength and courage in battle. They were involved in many clan skirmishes with the MacKinnons, Camerons, MacDonalds and Campbells. They were fierce Jacobites fighting in all of the Jacobite risings.

There are several different origins for the surname Maclean, however, the clan surname is an Anglicisation of the Scottish Gaelic MacGilleEathain. This was the patronymic form of the personal name meaning "servant of (Saint) John".[1] They are descendents of Loarn mac Eirc, a 5th century king of Dál Riata. The family grew very powerful throughout the Hebrides and Highlands through allegiances with the Catholic Church in the 9th century, the MacDonalds in the 13th century, the MacKays and MacLeods in the 16th century. The early kings of Scotland also befriended the clan for their knowledge of the sea and their large numbers of sea-going vessels, which were useful against the Viking raids in the 9th century.[citation needed]

Gillean of the Battleaxe

The founder of the clan was a Scots warlord descended from the royal Cenél Loairn named Gilleain na Tuaighe ("Gillean (pronounced Gillane not Gill-ee-un) of the Battleaxe", who lived circa (1174–1249). The stories of Gillean being descended from the FitzGerald dynasty is fictitious, as the FitzGeralds are of Cambro-Norman descent and the Macleans are of Gaelic descent, having been in Scotland since the Dalriadic migration from northeastern Ulster in the earlier centuries AD. Gillean's great-grandfather was Old Dugald of Scone, born ca. 1050 during the reign of King Macbeth of the House of Moray, the principal royal line of the Cenél Loairn. He was a Judex (judge) and Councillor to King David of Scots.[2]

Gillean's son Malise (from the Gaelic Maoliosa "Servant of Jesus") was thought by some to have taken the name Gillemor in 1263 and wrote his name as "Gillemor Mcilyn ("son of Gillean"), County of Perth" on the third Ragman Rolls of 1296. This has been disproved in "Warriors and Priests" by Nicholas Maclean-Bristol. Malise is said to have led his followers against the Norsemen at the Battle of Largs in 1263 during the Scottish-Norwegian War where the Scottish were victorious.[2]

Gillean's great-great-grandson settled in Mull and by 1390, Donald, Lord of the Isles gave land to his two brothers-in-law, thus starting the two main branches of the clan: Maclean of Duart and Maclaine of Lochbuie (both on the island of Mull where the name is still frequently found).

During the 14th and 15th century many battles were fought between the Clan Maclean and Clan Mackinnon.[3]

In 1411 the Clan MacLean fought as Highlanders at the Battle of Harlaw near Inverurie in Aberdeenshire on 24 July 1411 against an Army of Scottish Lowlanders. Their enemy was the forces of the Duke of Albany and Earl of Mar. The MacLeans were led by "Red Hector of the Battles", the 6th Chief, who engaged in single combat with the chief of Clan Irvine, known as "Sir Alexander de Irwine." After a legendary struggle both died of the wounds inflicted upon each other.[2]

The Battle of Corpach took place in 1439. It was fought between the Clan Maclean and the Clan Cameron.[4] In 1484 the Clan MacLean fought at the Battle of Bloody Bay on the side of the Lord of the Isles, chief of Clan Donald.[2] 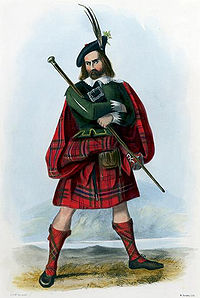 "Mac Lean" illustration by R. R. McIan, from James Logan's The Clans of the Scottish Highlands, 1845.

Sixteenth century and the Anglo-Scottish Wars

In 1513 During the Anglo-Scottish Wars, the Clan MacLean fought against the English at the Battle of Flodden Field. Hector MacLean 9th chief was killed. The clan extended its influence to other Hebridean islands such as Tiree and Islay and onto the mainland.[2] In 1560 the Clan MacLean, joined by their allies the Clan Mackay and Clan MacLeod became part of the Gallowglass, who were ferocious mercenaries of Norse-Gaelic descent who served in Ireland for King Shane O'Neill.

The Battle of Glenlivet took place in 1594, Clan MacLean under Sir Lachlan Maclean fought in support of the Earl of Argyll and Clan Campbell against the Earl of Huntly and Clan Gordon.[2]

The Battle of Traigh Ghruinneart, more commonly known as the Battle of Traigh Ghruinneart took place on the 5th August 1598. Fought between the Clan Donald and Clan Maclean on the Isle of Islay. Chief Sir Lachlan Maclean was killed.[2][5] After Sir Lachlan MacLean's death in 1598, his sons took revenge on his suspected murderers, the MacDonalds, by carrying out a massacre of the people of Islay which lasted for three days. After obtaining "Letters of Fire and Sword" he was assisted in this by the MacLeods, MacNeils,and Camerons. The quarrel between the MacLeans and the Macdonalds of Islay and Kintyre was, at the outset, merely a dispute as to the right of occupancy of the crown lands called the Rinns of Islay, but it soon involved these tribes in a long and bloody feud, and eventually led to the near destruction of them both. The Macleans, who were in possession, claimed to hold the lands in dispute as tenants of the crown, but the privy council decided that Macdonald of Islay was really the crown tenant.[2]

During the Civil War Sir Lachlan Maclean, 17th chief led the Clan MacLean as royalists at the Battle of Inverlochy (1645), Battle of Auldearn and Battle of Kilsyth under James Graham, 1st Marquess of Montrose, alongside men from Clan MacDonald, and other allies from Ireland raised by Alasdair MacColla. Their enemy was the Scottish Argyll government forces of Clan Campbell, led by Archibald Campbell, 1st Marquess of Argyll. Through cunning tactics the Royalist force of 1500 MacDonalds and MacLeans defeated the Argyll Campbell force of 3000.[2]

In 1647 the MacLean's Duart Castle was attacked and laid siege to by the Argyll government troops of Clan Campbell, but they were defeated and driven off by the Royalist troops of Clan MacLean. The Battle of Inverkeithing took place in 1651. Clan MacLean fought at the battle as royalists. Sir Hector Maclean, 18th chief was killed.[2]

Archibald Campbell the 9th Earl, son of the Marquess of Argyll, invaded the Clan MacLean lands on the Isle of Mull and garrisons Duart Castle in 1678. The Battle of Killiecrankie, 1689, Clan Maclean led by Sir John Maclean, 20th chief fought in support of John Graham, 1st Viscount of Dundee.[2]

Eighteenth century and the Jacobite uprisings

During the Jacobite Uprisings of 1745 to 1746 the Clan MacLean supported the House of Stuart and the Jacobite cause. Sir Hector Maclean, living in exile in Paris, went to Edinburgh to gain support for the Prince Charles Edward Stuart, but was betrayed by his bootmaker and was imprisoned in Edinburgh Caste and then the Tower of London. Because he was considered a French citizen, he escaped a capital sentence and was released after the rising was over. Many members of the clan were killed fighting at the Battle of Culloden in 1746. Charles MacLean of Drimin was killed leading the MacLeans at Culloden.[2] 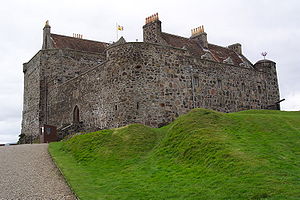 Many of the clansmen were killed at Battle of Culloden. The massacre of the MacDonald clansmen in the late 17th century marked the point when the fortunes of the MacLean clan began to wane, and by 1691 the Campbells had gained possession of Duart Castle and most of the MacLean estates. However, Duart Castle was reclaimed by the family in 1911 and has been restored as the family seat. Many MacLeans dispersed to other countries such as Canada, the United States, Australia and New Zealand.

Duart Castle on the Isle of Mull is the traditional home of the MacLeans. There has probably been a fortress on the site (the "Dubh-Aird" – Black Height) since early mediaeval times. The current castle originally consisted of a square curtain wall surrounding lean-to buildings, and was most likely built for MacDougall of Dunollie around 1250. Some 100 years later it was part of the dowery of Lady Mary Macdonald, daughter of the Lord of the Isles, upon her marriage to Lachlan Lubanach Maclean. Lachlan built the Great Keep of Duart ca. 1370, and additions were made to the castle in the middle and late 16th century, and late 17th century. Duart was abandoned by the Macleans in 1691, and the castle was inhabited by the redcoats until 1751. Duart fell into ruins but was restored early in the 20th century by Sir Fitzroy Donald MacLean and has been the seat of the clan chief since its reopening in 1912. The exterior of Duart was used in the film "Entrapment" with Sean Connery (whose mother was a Maclean) and Catherine Zeta Jones. 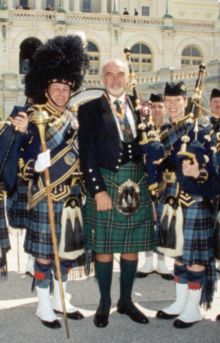 Long before crest badges were used by members of clans, it is said that plants were used as badges. These clan badges consisted plants and were worn in bonnets or used as a banner and attached to a pole or spear. The clan badge attributed to Clan Maclean is Crowberry.[8]

There are two slogans attributed to Clan Maclean. Slogans, are sometimes said to be war cries, other times they are said to be rallying points for the clan. Slogans used by clans generally appear as a second motto within the chiefs arms. Slogans of Clan Maclean include: Bàs no Beatha (from Scottish Gaelic: "Death or life") and Fear eile airson Eachuinn (from Scottish Gaelic: "Another for Hector").[9][10]