Origin of the clan

Like many of the families that came to power under King David I of Scotland, the Comyn clan is of Norman origin. The surname is either a place-name possibly derived from Comines, near Lille, in France[2][3], or possibly derived from Bosc-Bénard-Commin, near Rouen in the Duchy of Normandy.[4] Richard Comyn, the nephew of William Comyn, chancellor to King Henry I of England, is the one that established this family in Scotland. A later descendant was William Comyn, who married Marjory, Countess of Buchan. William's mother was Hextilda, the granddaughter of King Donald Bane of Scotland (Donald III). His son was Walter Comyn, the man who acquired the lordship of Badenoch. The seat of power was Ruthven Castle, located on the spot where now stands the remains of Ruthven Barracks. Ruthven Castle commanded the northern end of two passes over the Mounth, the Drumochter and Minigaig passes.[5] This lordship then passed to his nephew, the first John Comyn. This John was the first to be known as "the Red" Comyn. He was a descendant of William, Earl of Buchan, by his first wife, Sarah Fiz Hugh.

The chiefs also possessed the lordship of Lochaber. Here can be found the remains of Inverlochy Castle, built by the Comyns about 1270–1280.[6] 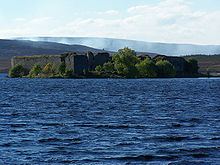 The son of the first John Comyn was John II Comyn, Lord of Badenoch known as John "the Black" Comyn. He had a claim to the throne based on his descent from King Donald Bane. John was made one of the six guardians of Scotland after the death of King Alexander III, 1286. Their duty was to act as regents for Margaret of Norway, heir to the Scottish throne; however, she died en route to Scotland. King Edward I of England was asked to step in a decide who had the best claim to the crown of Scotland. He decided in favour of John Balliol. John had married Eleanor Balliol between 1270 and 1283.[7] The Black Comyn died at Lochindorb Castle in about 1303, a castle the Comyns built in the thirteenth century.[6]

The son of the Black Comyn was John, known as the Red Comyn (John III Comyn, Lord of Badenoch). This John Comyn was both a descendant of King Donald III and King David I, as his maternal grandmother was Devorguilla of Galloway, the daughter of Margaret of Huntingdon. John Comyn married Joan de Valence. At this time the two main branches of the Clan Comyn were the Comyn Lords of Badenoch and Lochaber, and the Comyn Earls of Buchan.[8] They controlled key castles and therefore were the main lines of communication, especially in northern Scotland where their power stretched from Inverlochy Castle in the west to Slains Castle in the east.[9] Between these two points they had their power strategically situated in the following castles: Ruthven Castle, Lochindorb Castle, Blair Castle, Balvenie Castle, Dundarg Castle, Cairnbulg Castle, Castle of Rattray and Kingedward.[10] In particular Clan Comyn castles controlled important passes from the north and west highlands into the Tay basin.[11] A third main branch of the Clan Comyn, the Comyns of Kilbride, held power in southern and central Scotland. They held castles at Kirkintilloch (Dumbartonshire), Dalswinton (Nithsdale), Cruggleton Castle (Galloway), Bedrule, Scraesburgh (Roxburghshire), and Kilbride (East Kilbride).[12]

In addition to their private holdings the Clan Comyn also held a number of royal castles through their role as hereditary sheriffs of Dingwall at Dingwall Castle and Banff Castle (in the north) and Wigtown in the south west.[13] In the early 1290's the Clan Comyn also took additional responsibility for the royal castles at Kirkcudbright, Aberdeen Castle in Aberdeen, Jedburgh Castle, Clunie, Dull and Brideburgh.[14] Comyn influence over the political scene was further strengthened by marriages with the earls of Marr, Ross, Sngus, Strathearn and Fife, and with the powerful families of Clan MacDougall, Clan Murray, the Balliols, Mowbrays, Umphravilles and Soules.[15] Other prominent allies of the Comyns were the Clan Graham, Clan Fraser, Clan Sinclair, the Cheynes, Mowats, Lochores, Clan Maxwell and Clan Hay.[16]

After a succession of indignities toward Scotland, the Scottish people were forced into rebellion. John III Comyn, Lord of Badenoch, known as John "the red" Comyn was a leader in Scottish independence. With the outbreak of war between England and Scotland, Comyn, his father, and his cousin, John Comyn, Earl of Buchan, crossed the border and attacked Carlisle 26 March 1296, defended for King Edward by Robert Bruce, Earl of Carrick, the father of the future king.[18]

John Comyn became the most powerful political and military leader in Scotland from 1302 to 1304. He led the Scottish army against the English in the Battle of Roslin, 23 February 1303. John's greatly outnumbered army faced and beat the well-trained English army. However, many of the Red Comyn's allies made peace with King Edward, and so John submitted to King Edward at Strathhord on 9 February 1304.[19]

In 1306 John Comyn, Lord of Badenoch, and Robert Bruce met in the church of the Grey Friars, Dumfries. This resulted in John's murder on 10 February 1306.[20] Why this all came about is a matter of dispute. One account claims that the Bruce knew he had to gain the support of John Comyn; however, John was outraged when it was proposed he betray his terms with King Edward I.[21] It is likely that Robert Bruce stabbed the Red Comyn at the high altar and his companions finished the job.[22] Sir Robert Comyn, uncle to the Comyn chief, while defending of his nephew, was also killed. Both the Comyn chief titles as Lord of Badenoch and Earl of Buchan were fofeited to the crown.

John's son, also named John, was killed while leading his clan against the forces of Robert Bruce at the Battle of Bannockburn in 1314. The Comyns had also previously been defeated by Bruce at the Battle of Inverurie (1308). Any hopes of the Comyns returning to power ended at Bannockburn. Adomar Comyn, the son of John, died just two years later and was the last male of the Badenoch line. The lands in Badenoch, once the centre of Comyn power, were given to the Clan Macpherson for supporting Robert Bruce.[23]

The taking of Castle Grant, 14th century; Originally a Clan Comyn stronghold, Clan Grant traditions tell us that the castle was taken from the Comyns by a combined force of the Grants and MacGregors. The Grants and MacGregors stormed the castle and in the process slew the Comyn Chief – and kept the Chief's skull as a trophy of this victory. The skull of the Comyn was taken as a macabre trophy and was kept in Castle Grant and became an heirloom of the Clan. (In the late Lord Strathspey's book on the Clan, he mentions that the top of the cranium was hinged, and that he saw documents kept in it.) Clan tradition predicts grave things if the skull ever leaves the hands of the family – prophesying that the Clan would lose all of its lands in Strathspey.

In the fifteenth and sixteenth centuries, the Cummings carried on significant, and bloody, feuds with Clan Macpherson, Clan Shaw, and Clan Brodie over lands in Nairnshire. In 1550 Alexander Brodie, chief of Clan Brodie and 100 others were denounced as rebels for attacking the Cummings of Altyre.[24]

During the late sixteenth and throughout the seventeenth century, members of the clan were known for their musical talents and served as the hereditary pipers and fiddlers to the Laird of Grant of Clan Grant.

Tartans associated with the surname Comyn/Cumming include :