Dingwall
For the community of the same name in Canada, see Dingwall, Nova Scotia.
For other uses, see Dingwall (disambiguation).

Dingwall (Scots: Dingwal,[1] Scottish Gaelic: Inbhir Pheofharain)[2] is a town and former royal burgh in the Highland council area of Scotland. It has a population of 5,026.[3] It was formerly an east-coast harbor but now lies inland. Dingwall Castle was once the biggest castle north of Stirling. On the town's present-day outskirts lies Tulloch Castle, parts of which may date back to the 12th-century building. In 1411 the Battle of Dingwall is said to have taken place between the Clan Mackay and the Clan Donald.

Dingwall railway station has lain on what is now called the Far North Line since circa 1865. It also serves the Kyle of Lochalsh Line, with the junction between the two lines being located within the town. The station is served with around 26 trains a day, 14 of which go to Inverness.

Dingwall formerly served as the county town of the county of Ross and Cromarty. It lies near the head of the Cromarty Firth where the valley of the Peffery unites with the alluvial lands at the mouth of the Conon, 14 miles (23 km) northwest of Inverness.

Its English name, derived from the Scandinavian Þingvöllr (field or meeting-place of the thing, or local assembly; compare Tynwald, Tingwall, Thingwall in the British Isles alone,[4] plus many others across northern Europe), preserves the Viking connections of the town; Gaels call it Inbhir Pheofharain (pronounced [iɲiɾʲˈfjɔhəɾaiɲ]), meaning "the mouth of the Peffery") or Baile Chàil meaning "cabbage town".[5][6]

The 18th-century town house, and some remains of the ancient mansion of the once powerful earls of Ross, still exist. An obelisk, 51 feet (16 m) high, was erected over the grave of Sir George Mackenzie, 1st Earl of Cromartie, near the parish church of St Clement. It was affected by subsidence, becoming known as the "Leaning Tower", and was replaced by a much smaller replica in the early years of the 20th century. However even this is now marked by signs saying "Keep Out" on the grounds that it is a dangerous structure.

King Alexander II created Dingwall a royal burgh (pronounced the same as "borough") in 1226, and James IV renewed its charter. On the top of Knockfarrel (Gaelic: Cnoc Fhearghalaigh), a hill about three miles (5 km) to the west, stands a large and very complete vitrified fort with ramparts. 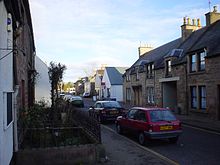 More recently, Dingwall suffered widespread flooding during storms in late October 2006, during which the weather cut off much of the Highlands north of Inverness, including the A9 and Far North Line for a significant period of time.[7]

Dingwall is the home of football team Ross County, who currently play in the Scottish First Division. Despite the town's small population, Ross County are able to attract sizable crowds to Victoria Park thereby maintaining the UK's most northerly full-time squad. The team contested the 2010 Scottish Cup Final, having knocked out Celtic in the previous round. Over 17,000 Staggies fans travelled to the showpiece event on 15 May 2010.

The Highland Theological College is located within the town. It is part of the University of the Highlands and Islands and has been recently approved by the Church of Scotland for the training of ministers.

The town holds the shortest and most northerly canal in the UK, the Dingwall Canal.

Keyboard player George Campbell, a member of the successful Ross-shire band - The Side - also comes from Dingwall; The Side famously were the only support for Bon Jovi at London's O2 Arena to an audience of 23,000 people. They have also supported Texas in Luxembourg at a 30,000 capcity festival and performed several other international shows in Russia, Holland and France, as well as appearing at nearby music festivals, Rockness and Belladrum. They are also known for releasing the unofficial Ross County song "The County's Going To Hampden" for which they received chart position of 23.[citation needed]

Dingwall was a parliamentary burgh, combined with Dornoch, Kirkwall, Tain and Wick in the Northern Burghs constituency of the House of Commons of the Parliament of Great Britain from 1708 to 1801 and of the Parliament of the United Kingdom from 1801 to 1918. Cromarty was added to the list in 1832.