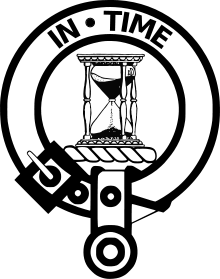 Crest badge suitable to be worn by members of Clan Houston.

Clan Houston is a Scottish clan. The clan does not currently have a chief therefore it is considered an Armigerous clan.

Origins of the Clan

The name is territorial in origin, derived from an old barony of the name in Lanarkshire. Hugh de Padinan, who is believed to have lived in the twelfth century, was granted the lands of Kilpeter. By about the middle of the fourteenth century, these lands had become known as Huston. Sir Finlay de Hustone appears on the Ragman Roll swearing fealty to King Edward I of England in 1296.

The castle of the de Hustones was built on the site of an ancient Cistercian abbey. The family also acquired a substantial barony near Whitburn, West Lothian, where Huston House, which was rebuilt in the eighteenth century, still stands today. Sir Patrick Hustone of that Ilk, who was probably the eleventh chief, married Agnes Campbell of Ardkinglas.

During the Anglo-Scottish Wars, Sir Peter Huston fought with the Earl of Lennox on the right wing at Battle of Flodden Field in 1513, where he was killed.

His son, Sir Patrick Huston of Huston, was a companion of James V of Scotland and Keeper of the Quarter Seal. He intrigued with Lord Lennox against the king, and was slain at the Battle of Linlithgow.

The next Sir Patrick, his grandson, was knighted by Mary, Queen of Scots, and accompanied her when she visited Lord Darnley in Glasgow.

The nineteenth chief was created a Baronet of Nova Scotia by Charles II in 1668. His son, Sir John, was falconer to Queen Mary and her husband, King William of Orange.

The fifth Baronet was a prosperous merchant who had substantial interests in United States. His son, who was educated in Glasgow, made his home in Georgia (U.S. state), and he and his brother greatly increased the family’s colonial estates. They are reputed to have owned over eight thousand slaves when the thirteen American colonies broke from Great Britain and declared their independence. The Hustons renounced their Scottish titles in favour of their American wealth. From this family descended General Sam Houston, born in 1793, who fought for the independence of Texas from Mexico. He was first president of Texas and later a United States Senator. Sir Robert Houston, descended from a Renfrew branch of the family, was a prominent Victorian shipowner who was created a baronet of the United Kingdom. He is credited with developing the theory of convoys first used during the Boer War.

A living member of the clan Josh Houston has taken up the case with the Court of the Lord Lyon to be instated as the Chief of the Houston Clan. The Court has yet to reach a decision.