Clan Drummond is a Scottish clan deriving its name from the parish of Drymen, in what was western Stirlingshire. Legend gives Maurice of Hungary as founder of the clan. The name is rendered "Druimeanach" in modern Scottish Gaelic.[1]

Origins of the Clan

Clan traditions credit the founder of the clan as Maurice of Hungary,[2] a Hungarian prince descended from Árpád, who is said to have accompanied Edgar Ætheling, heir to the English throne, and his sister Saint Margaret of Scotland, when they sailed there in 1066 to escape the Norman conquest of England.

This disregards accepted history that Edgar and Margaret were brought to England in 1057 by their father, Edward the Exile: Edward died immediately (some say he may have been murdered), and his children lived at the Court of England's King Edward 'the Confessor' with their mother Agatha. Edgar, about thirteen in 1066, was elected king of England after the battle of Hastings and the death of his cousin King Harold II, but together with the rest of the English government submitted to Guillaume (William) of Normandy, afterwards King of England, at Berkhamsted two months later (16 December 1066). He later sailed to Scotland, accompanied by his mother Agatha and sisters Margaret and Christian, several years after 1066. In turn Maurice was the son of György, who, according to Europaeische Stammtafeln (E.S.),[3] went to Scotland in 1055 and became ancestor of the Drummond family. E.S. cites a 1959 work published in Warsaw as the source for this. It has long been asserted that the Drummond family was founded by a Hungarian who returned to Britain with Edward Ætheling, so this may be true.

According to E.S. and other sources,[4][5]György was the son of a Non-Christian marriage of Endre I (András I or Andrew I), afterwards, Apostolic King of Hungary, to a Hungarian woman, before Endre 's conversion to the Roman Catholic faith. Endres subsequent Christian marriage to a Russian Orthodox Princess, rendered the non-Christian children of his first marriage illegitimate under Catholic Canon law, and therefore with no rights to the now Christian Hungarian Throne. Consequently, György was obliged to leave Hungary, settling in Scotland, and founding the Drummond family, possibly named from the lands of Druiman which were granted to him either by MacBethad, or Malcolm III of Scotland. His choice of Scotland was very likely linked to the exiled English Royal House, since they had previously resided at the Court of István (Stephen I), King of Hungary, and after the submission of Harold II of England to William the Bastard, Duke of Normandy in December 1066, arrived in Scotland where they were warmly received by Scotland's King Mael-Coluim III who married Edgar's sister Margaret in 1070.[clarification needed]

If the account given by Europaeische Stammtafeln is based on fact, then the present Earl of Perth, Chief of Clan Drummond, is a living representative of the original male line of the Royal House of Árpád, the founding dynasty of Hungarian kings.[clarification needed]

In the 14th century during the Wars of Scottish Independence Clan Drummond fought against the English at the Battle of Dunbar in 1296. The clan's first recorded chief to take the name was Malcolm Beg, whose third son, also called Malcolm, fought at the Battle of Bannockburn in 1314. He is credited with the deployment of caltrops, tetrahedral iron spikes which when thrown onto the ground always have one spike uppermost to injure horses and unseat cavalry. They were spread prior to the battle. After the battle the clan was given lands in Perthshire by king Robert I of Scotland (Robert the Bruce). Malcolm's great-granddaughter, Annabella became the mother of King James I of Scotland in 1394.[1]

Sir Malcolm, the eldest great-grandson of the aforementioned Malcolm, obtained the clan home, Stobhall Castle, from his aunt Queen Margaret Drummond, David II of Scotland's wife.[1] His brother John's great-grandson, also John, became a Lord of Parliament and the first Lord Drummond.[1] One year of his life was spent in confinement within Blackness Castle after he assaulted the Lord Lyon, King of Arms. He had a daughter, Margaret, said to have been secretly married to King James IV, who died by means of a meal, along with two of her sisters. Although some say it was murder, others claim it was simple food poisoning.

Chief Sir Malcolm Drummond married Isabel Douglas the Countess of Mar. He obtained the lands of Stobhall from his aunt Queen Margaret who had first obtained it from King David II of Scotland. Sir Malcolm was murdered in 1403 by a band of Highland marauders, said to have been the Clan Stewart of Appin led by Alexander Stewart, the son of the Wolf of Badenoch. Malcolm was succeeded by his brother John, whose great-grandson, also called John was made the 1st Lord Drummond.[1]

Chief John, 1st Lord Drummond was judiciary of Scotland, a Privy Councillor, constable of Stirling Castle and was created a Lord of Parliament on 29 January 1487.

Battle of Knockmary, 1490, This battle was between the two long feuding clans of Clan Murray against the Clan Drummond and Clan Campbell.[6] David Drummond was later executed for the burning of a group of Murrays in a church.[1] 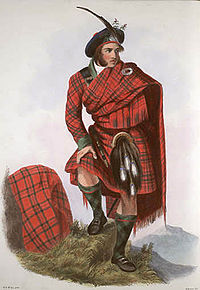 A romanticised Victorian-era illustration of a Drummond clansman by R. R. McIan from The Clans of the Scottish Highlands published in 1845.

In 1501 another Drummond, Margaret the fair, enraptured King James IV of Scotland. She was, to him, "The diamond of Delight." Because of his love for her, James originally declined the marriage to Margaret Tudor, daughter of the King of Henry VII of England. It is rumored that James had indeed married Margaret Drummond and was to have her crowned Queen of Scotland. The nobles, mostly lowlanders and border Lords, feared that the Drummonds were becoming too powerful. They decided that Margaret must die, thus forcing James to marry the Tudor Princess. Margaret, and her two sisters, were poisoned. Shortly after, James married Margaret Tudor, which made way for the union of the Scottish and English Crowns a century later.[7][8]

In 1589 Patrick, 3rd Lord Drummond appointed his deputy kinsmen, John Drummond of Drummond-Ernoch, Royal Forester of Glenartney. It was in this post that he cut off the ears of some of the Clan MacGregor who he had caught poaching. In revenge a party of MacGregors, aided by their cohorts the Macdonalds, attacked Drummond and cut off his head. They then proceeded to John's sister Margaret's residence, Ardvorlich Castle on the banks of Loch Earn. Her husband Alexander Stewart, the Laird of Ardvorlich, was away from home at the time the McGregors and their cohorts the Macdonalds burst in, and demanded bread and cheese. The MacGregors then unwrapped John's bloodied head and crammed its mouth full, placing it on a platter in the middle of the dinner table for their hostess to find when she returned with food and drink for them. On seeing her beloved brother's severed head, Margaret, who was heavily pregnant at the time, almost lost her reason and fled into the woods beneath Ben Vorlich, where by the shores of a small loch she gave birth to her child, a son James Stewart. He grew up to be the famous Major James Stewart of the Covenanting Wars, of whom Sir Walter Scott wrote the book "The Legend of Montrose, telling of his exploits. For what they had done to his mother, he vowed vengeance on the McGregors and played a major role in having the Clan itself proscribed.[1]

James Drummond, descendant of John, Margaret's father, became the first Earl of Perth in 1605, and his brother John became his successor on his death in 1611, and his sons became Earls of Perth like their father before them. Lord Drummond led his forces in support of the Covanenters against the Royalists at the Battle of Tippermuir in 1644. The chief of Clan Drummond, third Earl of Perth joined James Graham, 1st Marquess of Montrose in August 1645 and was taken prisoner at the Battle of Philiphaugh the following month.

During the battles that followed in the decades after the Civil War the Clan Drummond fought at the Battle of Killiecrankie in 1689.

When King James VII came to the throne in 1685, James Drummond, 4th Earl of Perth (later 1st Duke of Perth), had converted to the Catholic Faith, as did his brother, the 1st Earl of Melfort. Therefore during the Jacobite Uprisings the Clan Drummond were largely supporters of the Jacobite cause and the House of Stuart. Chief James Drummond, 2nd Duke of Perth joined the jacobites during the rising of 1715 and fought at the Battle of Sheriffmuir he later fled in exile to France.[1]

However Drummond’s Edinburgh Volunteers Regiment, led by Adam Drummond fought on the side of the British government at the Battle of Prestonpans in 1745 and Adam Drummond was captured there.

James Drummond, 3rd Duke of Perth was born in France but returned to Scotland in 1734 to live at Drummond Castle with his mother.[1] He was one of Prince Charles Edward Stuart's closest commanders and he was involved in the Siege of Carlisle. Clan Drummond fought as Jacobites at the Battle of Falkirk (1746) and the Battle of Culloden in 1746. At the Battle of Culloden James Drummond, 3rd Duke of Perth was shot and later died of his wounds, he was buried at sea from a boat which was escaping to France.[1] His brother Lord John Drummond went into exile in France. Their cousin, William Drummond, 4th Viscount Strathallan was killed during the battle.[1]

For their support of the Jacobite Stewarts through the risings of 1715 and 1745 the property and titles of the Drummonds were twice forfeited. It was not until 1853, through an Act of Parliament, that the title of Earl of Perth and other forfeited titles were restored to George Drummond, who was also in the French peerage as a Baron.[1]

James Eric Drummond (1876–1951), 16th Earl of Perth, served as the first secretary-general of the League of Nations. Lord Perth, a Catholic, was also British ambassador to Rome, from 1933 to 1939, and was chief advisor on foreign publicity at the Ministry of Information during World War II.

His successor, John David Drummond, was able to buy back the family home, Stobhall Castle.