Caltrop
For the plant or its fruit, see water caltrop. 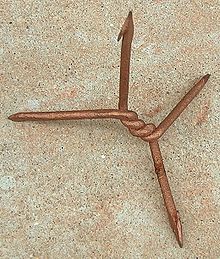 A caltrop (also known as caltrap, galtrop, cheval trap, galthrap, galtrap,[1] calthrop, crow's foot[2][3]) is an antipersonnel weapon made up of two or more sharp nails or spines arranged in such a manner that one of them always points upward from a stable base (for example, a tetrahedron). They may be thought of as the landmines of antiquity, useful to shape the battlefield and force the enemy into certain paths and approaches, or to provide a passive defense as part of a defensive works system. Caltrops served to slow down the advance of horses, war elephants, and human troops. They were said to be particularly effective against the soft feet of camels.[4] In more modern times, caltrops are used against wheeled vehicles with pneumatic tires.

The modern name "caltrop" is derived from the Latin calcitrapa (foot-trap). The synonymous Latin word tribulus gave rise to the modern Latin name of a plant offering similar hazards to sandaled or bare feet, Tribulus terrestris (Zygophyllaceae), whose spiked seed case can also injure feet and puncture tires. This plant can also be compared to the starthistle Centaurea calcitrapa, which is sometimes called the "caltrop". A water plant with similarly-shaped spiked seeds is called the "water caltrop", Trapa natans.

Iron caltrops were used as early as 331 BC at Gaugamela according to Quintus Curtius (IV.13.36). They were known to the Romans as tribulus or sometimes as Murex ferreus, the latter meaning 'jagged iron'.

The late Roman writer Vegetius, referring in his work De Re Militari to scythed chariots, wrote:

The armed chariots used in war by Antiochus and Mithridates at first terrified the Romans, but they afterwards made a jest of them. As a chariot of this sort does not always meet with plain and level ground, the least obstruction stops it. And if one of the horses be either killed or wounded, it falls into the enemy's hands. The Roman soldiers rendered them useless chiefly by the following contrivance: at the instant the engagement began, they strewed the field of battle with caltrops, and the horses that drew the chariots, running full speed on them, were infallibly destroyed. A caltrop is a device composed of four spikes or points arranged so that in whatever manner it is thrown on the ground, it rests on three and presents the fourth upright.[6]

The caltrop continued in use into the 17th century; a single example was found in Jamestown, Virginia, in the United States.

Undoubtedly the most unusual weapon or military device surviving from seventeenth-century Virginia is known as a caltrop, a single example of which has been found at Jamestown. It amounts to a widely spread iron tripod about three inches long with another leg sticking vertically upward, so that however you throw it down, one spike always sticks up. ... There is no doubt that the most inscrutable Indian treading on a caltrop would be shocked into noisy comment. ... The fact that only one has been found would seem to suggest that they were used little, if at all. As with all military equipment designed for European wars, the caltrop’s presence in Virginia must be considered in the light of possible attacks by the Spaniards as well as assaults from the Indians.[7]

The Japanese version of the caltrop is called makibishi. Makibishi were sharp spiked objects that were used in feudal Japan to slow down pursuers and also were used in the defense of samurai fortifications. Iron makibishi were called tetsubishi while the makibishi made from the dried seed pod of the water chestnut formed a natural type of makibashi called tennenbishi. Both types of makibishi could penetrate the thin soles of the shoes such as the waraji sandals that were commonly worn in feudal Japan.[8][9]

Punji sticks perform a similar role to caltrops. These are sharpened sticks placed vertically in the ground. Their use in modern times targets the body and limbs of a falling victim rather than well-shod feet, by means of a pit or tripwire.

In Britain, during the Second World War, large caltrop shaped objects made from reinforced concrete were used as anti-tank devices, although it seems that these were rare.[10] Very much more common were concrete devices called dragon's teeth that were designed to wedge into tank treads, and large ones weighing over 1 tonne (1.1 tons) are still used by the army to deny access to wheeled vehicles, especially in camp areas. However, dragon's teeth are immobile, so the analogy with the caltrop is inexact, but caltrop-like concrete blocks that interlock when piled up are used in the construction of sea defences. Another caltrop-like WWII defence is the massive, steel, freestanding Czech hedgehogs that were designed as anti-tank obstacles and were also used to damage warships and landing craft. These were in heavy use at Normandy and other beach-conflicts. 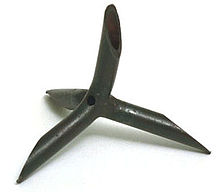 Caltrop used by the US Office of Strategic Services. The hollow spikes puncture self-sealing rubber tires. The hole in the center allows air to escape even if the other end of the tube is sealed by soft ground.

There have been a number of attempts to develop a caltrop-like device that will deflate tires in a manner useful to law enforcement agencies or the military.[11][12]

Caltrops were collected by Australian Light Horse troops as keepsakes. These Caltrops were either made by welding two pieces of wire together to form a four pointed star or pouring molten steel into a mould to form a solid, seven pointed star. The purpose of these devices was to disable horses. They were exchanged with French troops for bullets. The Australian Light Horse troops referred to them as "Horse Chestnuts". Examples from 1917 are kept in the Cart Museum in Bundeena, situated in the state of Victoria, Australia.

Caltrops have been used at times during labor strikes and other disputes. Such devices were used by some to destroy the tires of management and replacement workers. In this context, caltrops are usually referred to as "jack rocks," and have become an icon in pro-union rallies, often depicted on t-shirts, hats, or even worn as jewelry in some cases.

Because of the prevalence of caltrops during the Caterpillar strike of the mid-1990s, the state of Illinois passed a law making the possession of such devices a misdemeanor.[13]

A caltrop has had a variety of symbolic uses and is commonly found in heraldry.[1][14]

For example, the arms and standard of Clan Drummond include caltrops,[15] memorializing their use in the Battle of Bannockburn.

The caltrop is the symbol of the US Army's III Corps, which is based at Fort Hood, Texas. III Corps traces its lineage to the days of horse cavalry, which used the caltrop as an area denial weapon.

It is also the symbol of the United States Marine Corps' 3rd Division, formed on September 16, 1942.