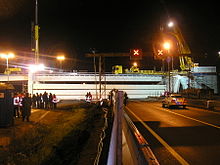 A coupure where the A2 motorway crosses the Diefdijk in the Netherlands. 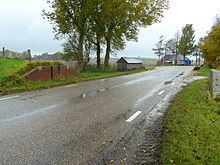 A coupure is a means of closing an opening in a wall, floodwall or levee (dike). The word comes from the french verb couper which means to cut. In historic times a coupure was a location where a breach in the city walls or the walls of a fortress was closed. In more modern times a coupure is a way of allowing traffic to pass a flood protection structure.

The most basic means of closing a coupure is with soil or sandbags. More sophisticated means of closing a coupure consist of wooden or metal beams or doors. Older coupures are usually brick built structures with provisions for placing two stacks of beams between them. Between the stacks of beams, which form two walls, horse manure or other animal faeces mixed with straw is dumped and compacted. This type of material swells when wet, thus providing additional waterproofing. Modern coupures can consist of only one wall and can be made watertight with the help of rubber flaps or other materials.

During a siege a coupure is a ditch or an earthenwork or wooden palisade built behind a breach in the walls of a fortress, or a city, made by the attacker's guns. Its purpose is to hinder and frustrate an attack made by the forlorn hope.

This was a strategy used many times by defenders of fortifications, for example, by the Irish defenders during the Siege of Clonmel (April - May 1650).

It can also be a passage through a glacis to create a sally port so that the defenders can launch a Sortie against the attackers.

Stephen Francis Wyley A Dictionary of Military Architecture Fortification and Fieldworks from the Iron Age to the Eighteenth Century, Drawings by Steven Lowe