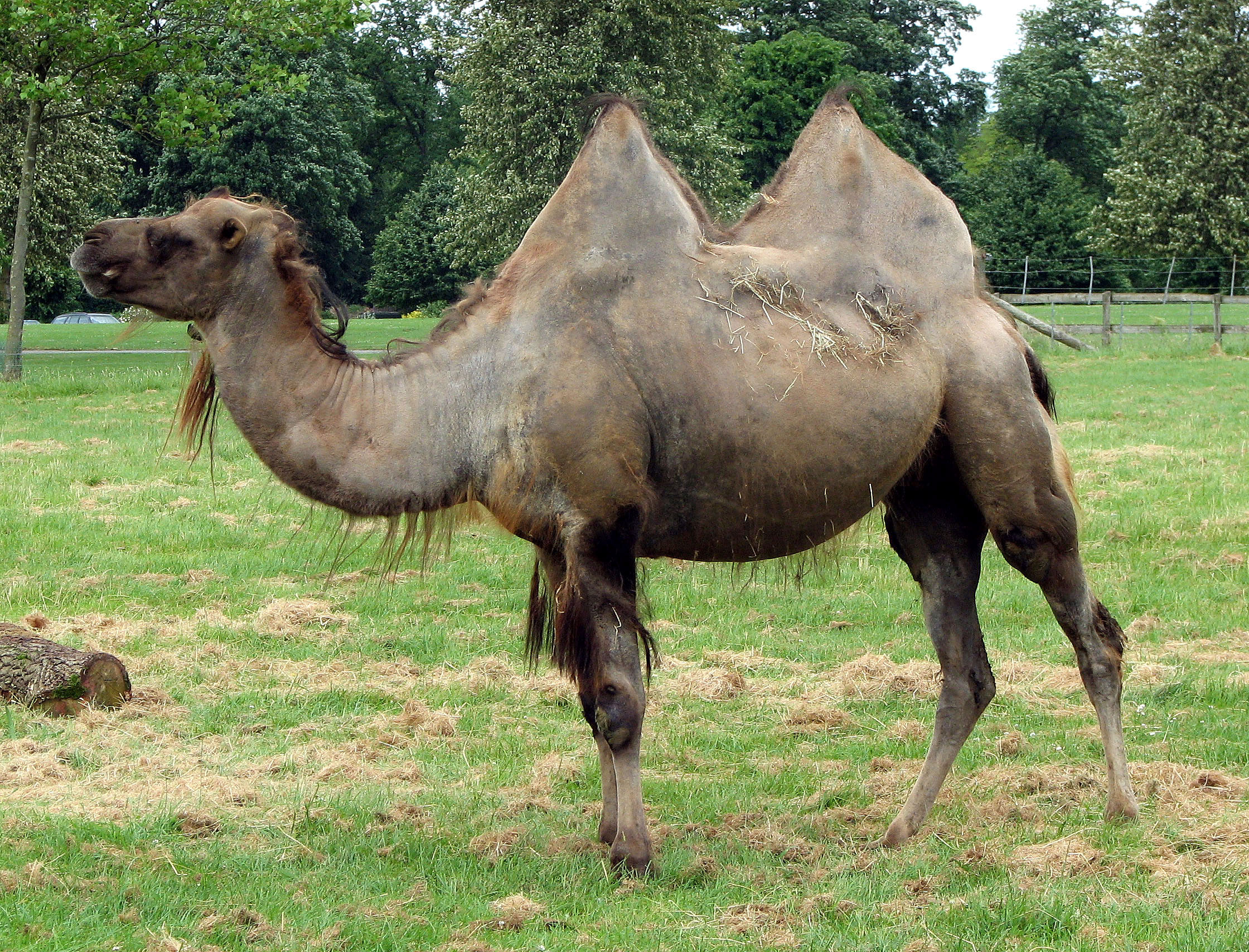 
Camels are within the "Camelus". The , one-humped or Arabian camel has a single hump, and the has two humps. They are native to the dry areas of western , and central and east Asia, respectively.

The average life expectancy of a camel is forty to fifty years. The term "camel" is also used more broadly to describe any of the six camellike creatures in the family ae: the two true camels, and the four South American camelids, the , , , and .

A fully-grown adult camel stands convert|1.85|m|ftin|abbr=on at the shoulder and convert|2.15|m|ftin|abbr=on at the hump. The hump rises about thirty inches (75 cm) out of its body. Camels can run up to convert|65|km/h|mi/h|0|abbr=on in short bursts and sustain speeds of up to convert|40|km/h|mi/h|0|abbr=on. Fossil evidence indicates that the ancestors of modern camels evolved in during the period, and later spread to Asia. Humans first domesticated camels before 2000 BC [cite book|title=Smithsonian Timelines of the Ancient World|first=Chris|last=Scarre|date=1993-09-15|isbn=978-1564583055|pages=176|quote=Both the dromedary (the one-humped camel of Arabia) and the Bactrian camel (the two-humped camel of Central Asia) had been domesticated since before 2000 BC.] [cite book|title=The Camel and the Wheel|first=Richard |last=Bulliet |series=Morningside Book Series |publisher=Columbia University Press |date=1990-05-20 |origyear=1975 |pages=183 |isbn=978-0231072359|quote=As has already been mentioned, this type of utilization [camels pulling wagons] goes back to the earliest known period of two-humped camel domestication in the third millennium B.C.&mdash;Note that Bulliet has many more references to early use of camels] . The dromedary and the Bactrian camel are both still used for milk, meat, and as beasts of burden&mdash;the dromedary in western Asia, and the Bactrian camel further to the north and east in central Asia.

The almost 14 million dromedaries alive today are domesticated animals (mostly living in , , and nearby countries).

The is now reduced to an estimated 1.4 million animals, mostly domesticated. It is thought that there are about 1000 wild Bactrian camels in the in China and Mongolia. [ [http://www.animalinfo.org/species/artiperi/camebact.htm Wild Bactrian Camel] , Animal Info]

There is a substantial population of dromedaries estimated at up to 700,000 in central parts of , descended from individuals introduced as transport animals in the 19th century and early 20th century. This population is growing at approximately 11% per year. The government of has decided to cull the animals using aerial marksmen, because the camels use too much of the limited resources needed by farmers. For more information, see .

A small population of introduced camels, dromedaries and Bactrians, survived in the until the 1900s. These animals, imported from Turkey, were part of the experiment and used as draft animals in mines and escaped or were released after the project was terminated. A descendant of one of these was seen by a backpacker in in 1972. Twenty-three Bactrian camels were brought to Canada during the .

The cama is a camel/ hybrid bred by scientists who wanted to see how closely related the parent species were. The dromedary is six times the weight of a llama, hence artificial insemination was required to impregnate the llama female (llama male to dromedary female attempts have proven unsuccessful). Though born even smaller than a llama cria, the cama had the short ears and long tail of a camel, no hump and llama-like cloven hooves rather than the dromedary-like pads. At four years old, the cama became sexually mature and attracted to llama and guanaco females. s, scientists hope that the cama will be fertile. If so, there is potential for increasing size, meat/wool yield and pack/draft ability in South American camels. The cama apparently inherited the poor temperament of both parents as well as demonstrating the relatedness of the New World and Old World camelids.

Dromedary-Bactrian hybrids are called bukhts, are larger than either parent, have a single hump and are good draft camels. The females can be mated back to a Bactrian to produce ¾-bred riding camels. These hybrids are found in Kazakhstan.

Camels do not store water in their humps as is commonly believed; the humps are actually a reservoir of fatty tissue. When this tissue is metabolized, it acts as a source of energy, and would yield more than 1 g of water for each 1 g of fat converted through reaction with oxygen from air. This process of fat metabolization generates a net loss of water through respiration for the oxygen required to convert the fat. [ [http://www.biol.lu.se/zoofysiol/Djurartiklar/Kamel.html What secrets lie within the camel's hump?] , , , Accessed 7 January 2008]

Their ability to withstand long periods without water is due to a series of physiological adaptations. Their s have an oval shape, unlike those of other , which are circular. This is to facilitate their flow in a dehydrated state. These cells are also more stable [ [http://www.ncbi.nlm.nih.gov/entrez/query.fcgi?cmd=Retrieve&db=PubMed&list_uids=816376&dopt=Abstract Unique properties of the camel erythrocyte membrane] , NCBI, 5 April 1975] in order to withstand high osmotic variation without rupturing when drinking large amounts of water (convert|100|l|0|USgal to convert|150|l|0|USgal in one drink). [ [http://www.zoo-hannover.de/zoo-hannover/en/zoo_v3/tiere_attraktionen/tiere_az/tiere_detail_726.html Dromedary] , Hannover Zoo, Accessed 8 January 2008]

Camels are able to withstand changes in and water content that would kill most other animals. Their temperature ranges from convert|34|°C|°F|0|abbr=on at night up to convert|41|°C|°F|0|abbr=on during the day, and only above this threshold will they begin to sweat. The upper body temperature range is often not reached during the day in milder climatic conditions, and therefore, the camel may not sweat at all during the day. Evaporation of their sweat takes place at the skin level, not at the surface of their coat, thereby being very efficient at cooling the body compared to the amount of water lost through sweating. This ability to fluctuate body temperature and the efficiency of their sweating allows them to preserve about five litres of water a day. Fact|date=December 2007

A feature of their nostrils is that a large amount of water vapor in their exhalations is trapped and returned to their body fluids, thereby reducing the amount of water lost through respiration.Fact|date=April 2008

They can withstand at least 20-25% weight loss due to sweating (most mammals can only withstand about 3-4% dehydration before cardiac failure results from the thickened blood).Fact|date=April 2008 A camel's blood remains hydrated, even though the body fluids are lost, until this 25% limit is reached.Fact|date=April 2008

Camels eating green herbage can ingest sufficient moisture in milder conditions to maintain their bodies' hydrated state without the need for drinking. [ [http://www.fao.org/docrep/t0690e/t0690e09.htm FOA Camels] , Camel information from The Food and Agriculture Organization of the U.N.]

A camel's thick coat reflects sunlight. A shorn camel has to sweat 50% more to avoid overheating. It also insulates them from the intense heat that radiates from the desert sand. Their long legs help by keeping them further from the hot ground. Camels have been known to swim.Fact|date=April 2008

Their mouth is very sturdy, able to chew thorny desert plants. Long eyelashes and ear hairs, together with sealable nostrils, form a barrier against sand. Their gait and their widened feet help them move without sinking into the sand.Fact|date=April 2008

The kidneys and of a camel are very efficient at retaining water. Urine comes out as a thick syrup, and their feces are so dry that they can fuel fires.Fact|date=April 2008

All camelids have an unusual immune system. In all mammals, the Y-shaped molecules consist of two heavy (or long) chains along the length of the Y, and two light (or short) chains at each tip of the Y. Camels also have antibody molecules that have only two heavy chains, which makes them smaller and more durable. These "heavy chain-only" antibodies, which were discovered in 1993, probably developed 50 million years ago, after camelids split from ruminants and pigs, according to biochemist Serge Muyldermans. ['Camelized' antibodies make waves, news story, Robert Koenig, Science, 318:1373, 30 November 2007.]

The camel is the only animal to have replaced the wheel (mainly in North Africa) where the wheel had already been established. The camel did not lose that distinction until the wheel was combined with the internal combustion engine in the 20th century.Fact|date=April 2008

Attempts have been made to employ camels as and mounts and as freight animals instead of horses and mules. In some places, such as , some of the camels have become and are considered to be dangerous to travelers on camels. The camels were mostly used in combat because of their ability to scare off horses in close ranges, a quality famously employed by the Persians when fighting , although the Persians usually used camels as baggage trains for arrows and equipment. The horses detest the smell of camels, and therefore, the horses in the vicinity become harder to control. The United States Army had an active camel corps stationed in California in the 19th century, and the brick stables may still be seen at the in , now converted to artists' and artisans' studio spaces. Camels have been used in wars throughout Africa, and also in the East Roman Empire as auxiliary forces known as recruited in desert provinces.

Camel milk is a staple food of desert nomad tribes and is richer in fat and protein than cow milk. Camel milk cannot be made into in the traditional churning method. It can be made if it is soured first, churned, and then a clarifying agent is added, or if it is churned at 24&ndash;25 °C (75&ndash;76 °F), but times will vary greatly in achieving results. The milk can readily be made into . Butter or yogurt made from camel milk is said to have a very faint greenish tinge. Camel milk is said to have many healthful properties and is used as a medicinal product in ; tribes believe that camel milk has great curative powers if the camel's diet consists of certain plants. In , the milk is considered an .

Camel milk, until recently, was impossible to make into traditional cheese since was unable to coagulate the milk proteins to allow the collection of curds. Under the commission of the FAO, Professor J.P. Ramet of the (ENSAIA) was able to produce curdling by the addition of and vegetable rennet. [ [http://www.fao.org/news/2001/010701-e.htm Fresh from your local drome'dairy'?] , July 6, 2001] The cheese produced from this process has low levels of cholesterol and lactose. The sale of camel cheese is limited owing to the low yield of cheese from milk and the uncertainty of pasteurization levels for camel milk which makes adherence to dairy import regulations difficult.

A camel carcass can provide a substantial amount of meat. The male dromedary carcass can weigh convert|400|kg|lb|0|abbr=on|sigfig=1 or more, while the carcass of a male Bactrian can weigh up to convert|650|kg|lb|0|abbr=on|sigfig=2. The carcass of a female camel weighs less than the male, ranging between 250 and 350 kg (550&ndash;770 lb), but can provide a substantial amount of meat. The brisket, ribs and loin are among the preferred parts, but the hump is considered a delicacy and is most favored. It is reported that camel meat tastes like coarse beef, but older camels can prove to be tough and less flavorful.

Camel meat has been eaten for centuries. It has been recorded by ancient Greek writers as an available dish in ancient at banquets, usually roasted whole. The ancient Roman emperor enjoyed camel's heel. Camel meat is still eaten in certain regions including , where it is called "Hilib geyl", , , , , and other arid regions where alternative forms of protein may be limited or where camel meat has had a long cultural history. In the Middle East, camel meat is the rarest and most prized source of . Not just the meat, but also blood is a consumable item as is the case in northern , where camel blood is a source of , , salts and minerals.

The consumption of camel blood is proscribed by Muslim beliefs, as blood products are not . According to tradition, camel meat and milk are not . Camels possess only one of the two Kosher criteria; although they chew their cuds, they do not possess cloven hooves. (See: )

A 2005 report issued jointly by the Saudi Ministry of Health and the United States Center for Disease Control details cases of human resulting from the ingestion of raw camel liver. [ [http://www.cdc.gov/ncidod/EID/vol11no09/05-0081.htm Plague from Eating Raw Camel Liver] , , Vol 11, No. 9, September 2005]